The real culture shock hit once I got out on to the street. The hotel owner gave me directions to the ‘Pink City’ the main tourist area of Jaipur after the Amber Fort. It seemed to be a fairly straightforward walk along a main road. This is not a main city thoroughfare like you would find in any western city. There are no footpaths, and if there were they would still be used by cars and motorbikes, it was chaos out there. Though it does all appear to be reasonably safe, keep your line and everyone works around you, cars and motorbikes included. Not sure if I would mess with a bus though. Where there was a raised footpath it covered the sewer and in so many places the path was broken and the stench of the sewers mingled with the fumes of the vehicles. It was pretty unpleasant.

I walked for quite a while and saw no sign of the ‘Pink City’ gates. I started to wonder if I was going in the right direction, and soon gave up in confusion and despair. Eventually I did what I should have done back at the start. I took a tuk tuk, one of the three wheeled motorbike taxis. I asked the driver to take me to the Pink City gates, discovering that I was heading in the right direction all along; it was just a hell of a lot further than I thought. 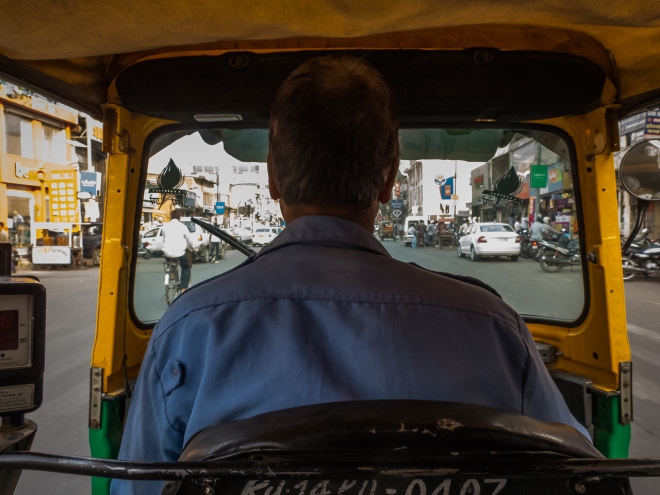 Jaipur is the capital city of the state of Rajasthan. It is named after its founder Jai Singh II who built his capital here in the late 17th century, the Amber Fort. As the population expanded the capital was moved down to the flat land below the fort and was named Jaipur. In 1876 the maharajah had the entire old city painted pink, the colour of friendship, to welcome the Prince of Wales. The city palace sits within the Pink City, and was my objective for today. I had about 30 minutes to get there before they stop allowing visitors in at 5:00pm.

Once through the city gates I was confronted with the bazaars, each section dealing with a different kind of product, spices, cloth, metals, leather, all have their sections. It was very crowded and a little disorientating to begin with, it wasn’t helped by the main thoroughfare being packed solid with noisy, smelly traffic. At least there was some sort of footpath along the shop fronts. I did not take a load of photos here. I am very reluctant to aim my camera at people I do not know. If you have followed my blog at all, you would probably have guessed this by now. Some people are good with people and others are not. I sit very much on the ‘not’ side of the equation. I suspect this will continue to be an issue through the rest of my India journey.

I did take some photos of the buildings though. By law all buildings have to be painted pink. I would love to have the paint supply contract! 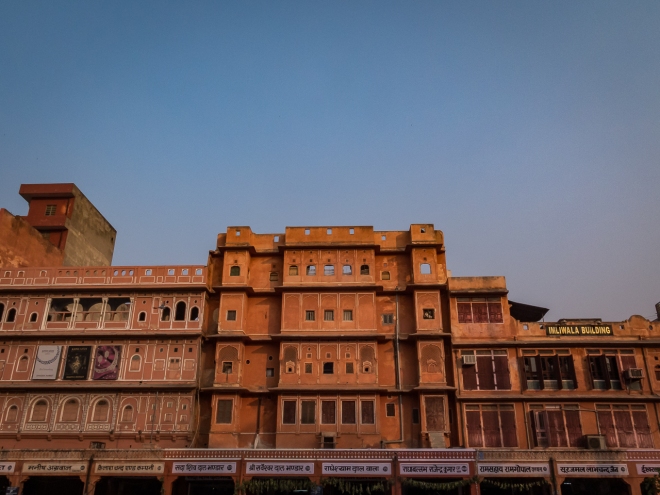 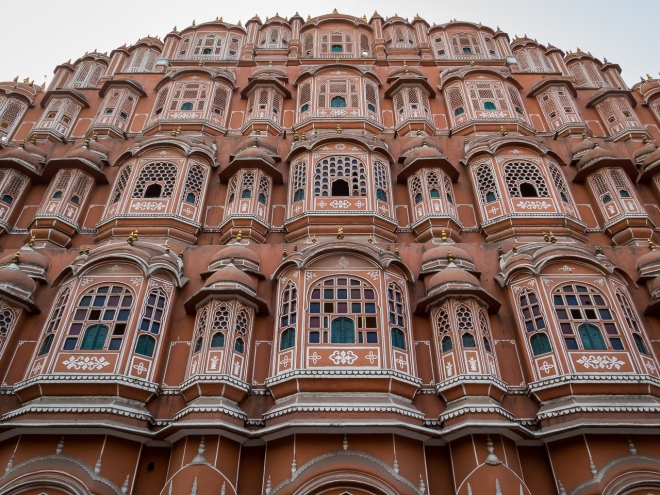 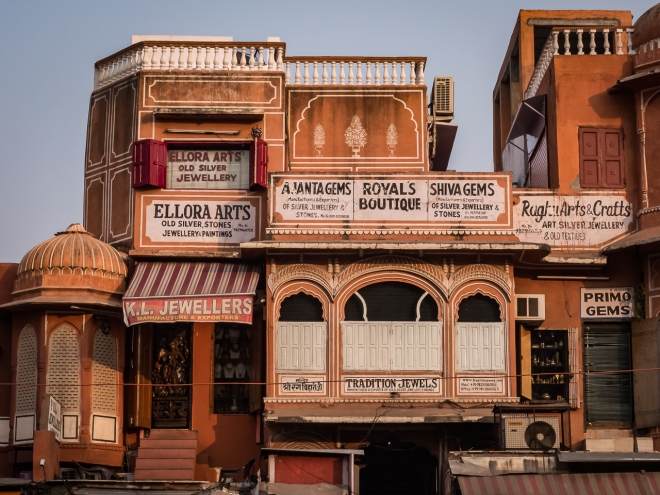 Reluctant to offend, I did not take any photos of shops, or people near shops, or anything that tried to capture the busyness and colour of the bazaar, though I did see a few things that caught my attention. Like these dolls for instance. 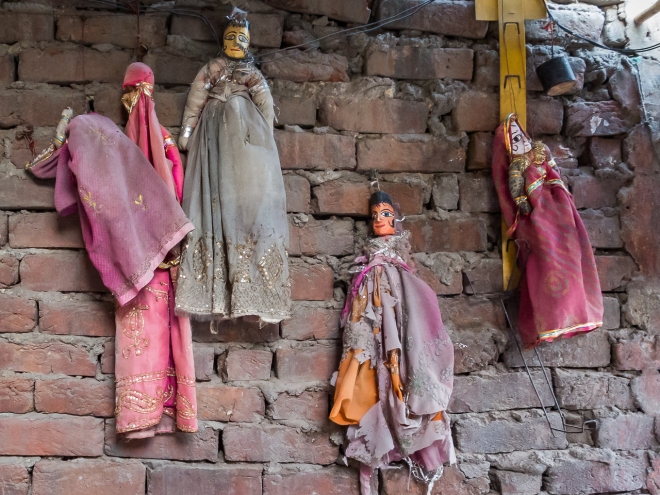 And a small shrine on the side of a building. 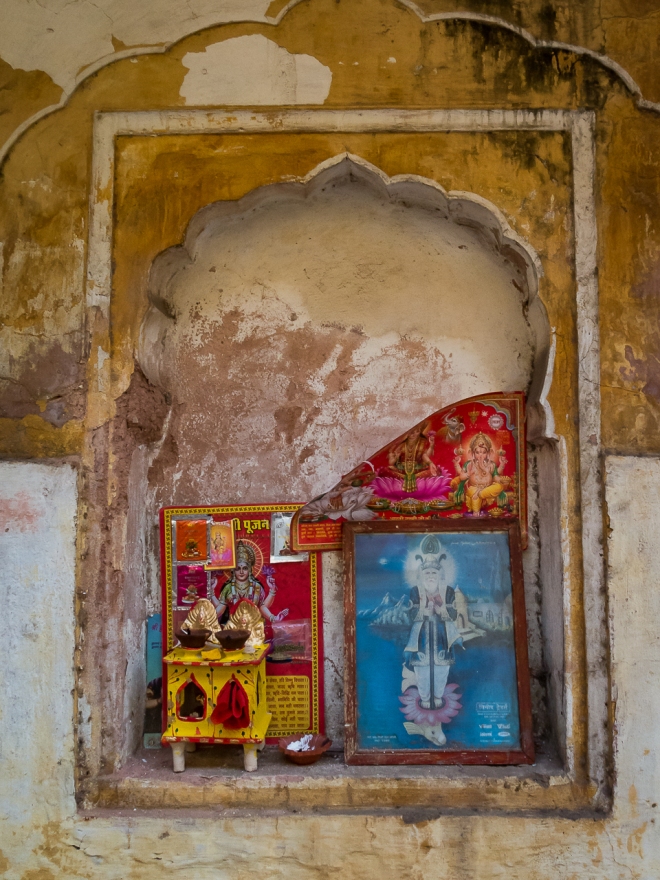 Eventually I found my way to where the City Palace was located, I saw a bus full of westerners and decided to follow it! 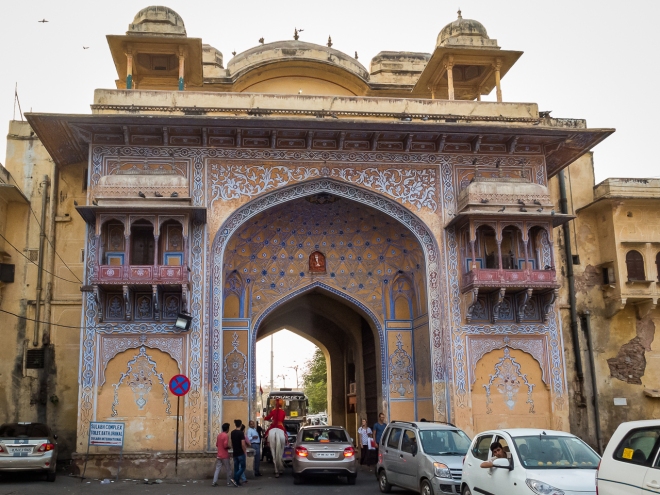 Passing through a small square, full of parked tourist buses, I finally found a place that I felt comfortable taking photos in. Goats, monkeys and bikes abounded, my sort of thing. 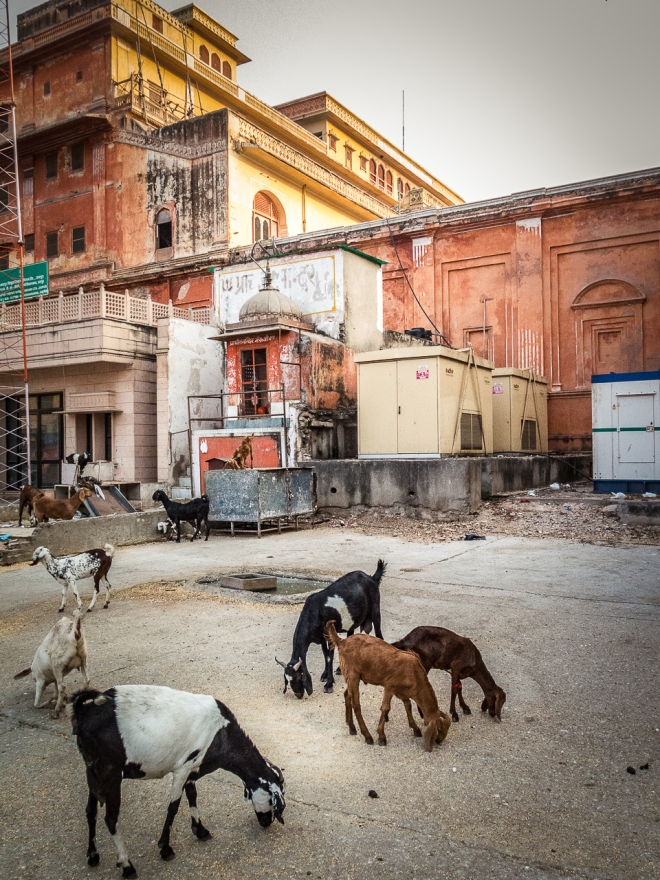 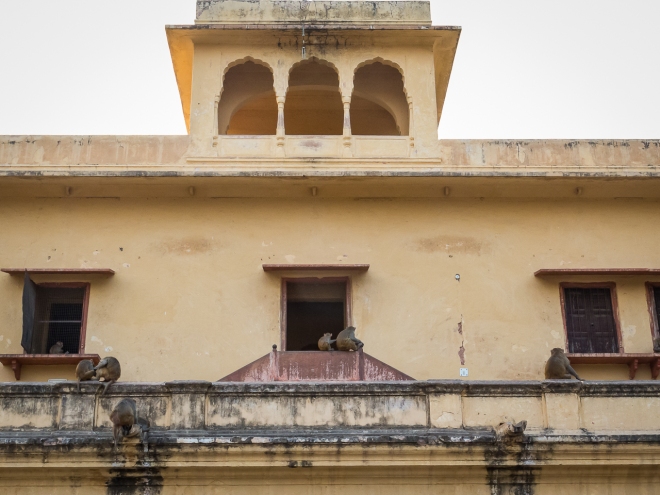 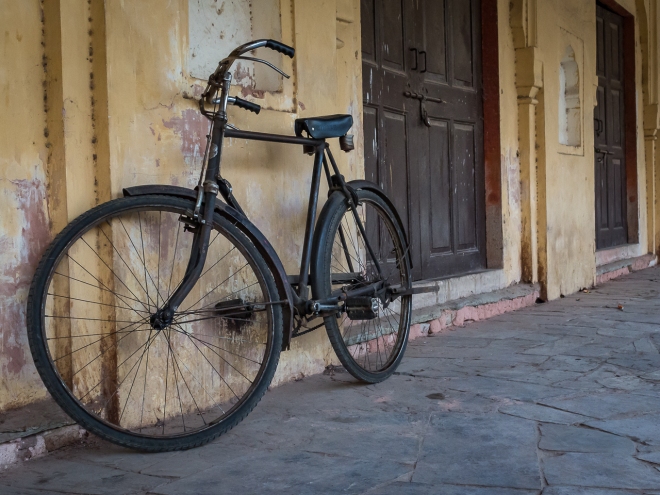 I paid the entrance fee to the City Palace just before the office closed. There were still a lot of people inside and I had an hour before everyone was booted out. 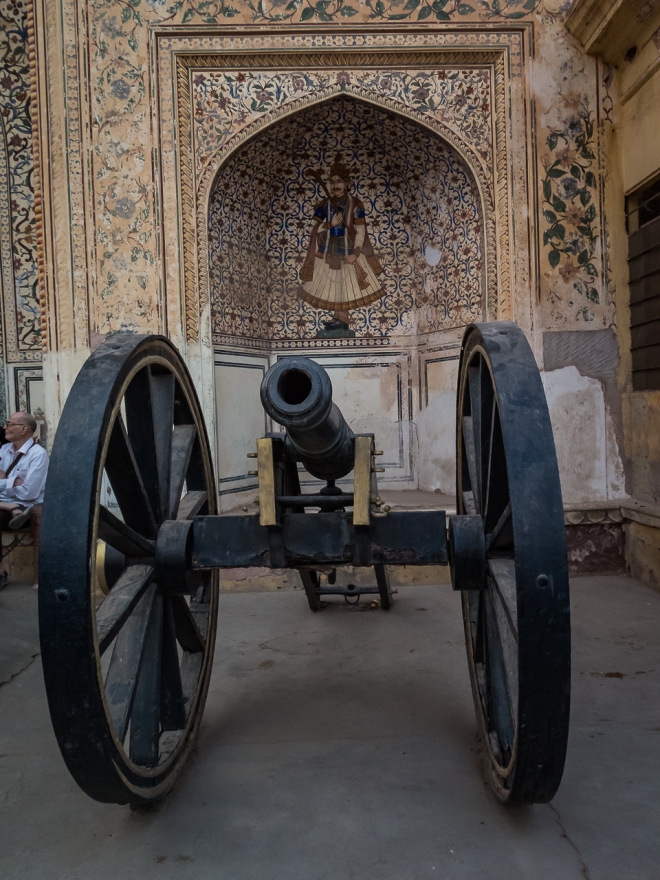 Wondering around listlessly I didn’t really pay a lot of attention to what was going on, nor to the history of the place. In the past I tried to get a bit of background before I enter a castle or a palace or temple so I can get an idea of what I am seeing. I had not done so here and it impacted on my enjoyment, plus I had been awake for 27 hours and was knackered. I took a couple of photos and left without seeing much at all. 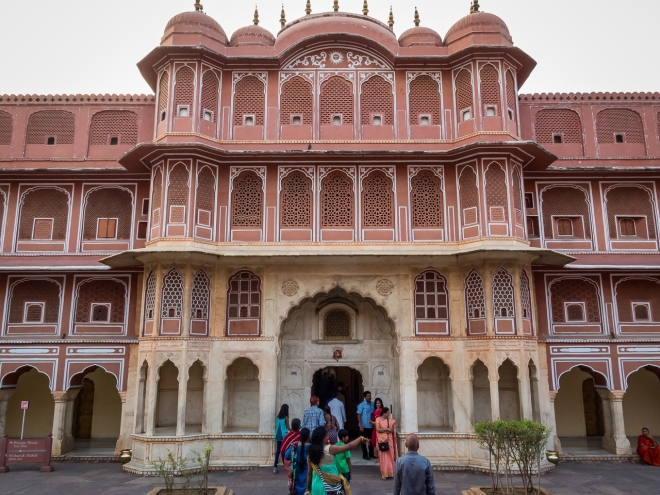 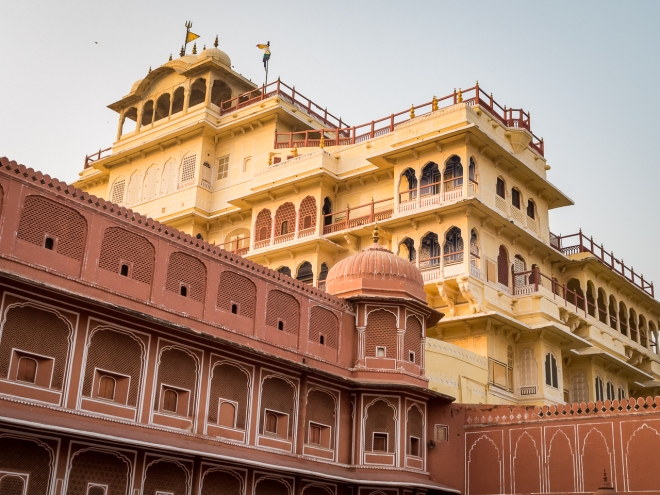 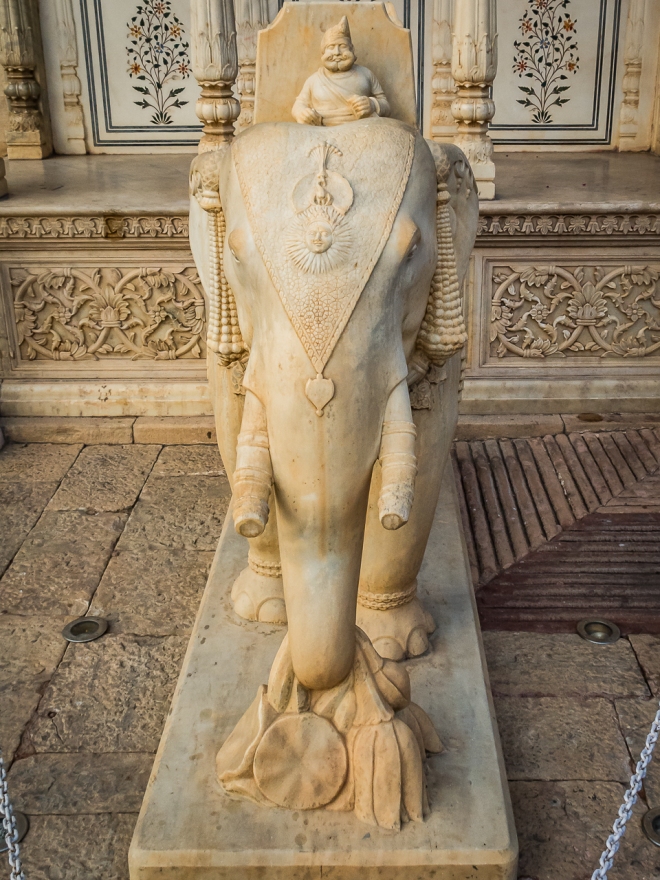 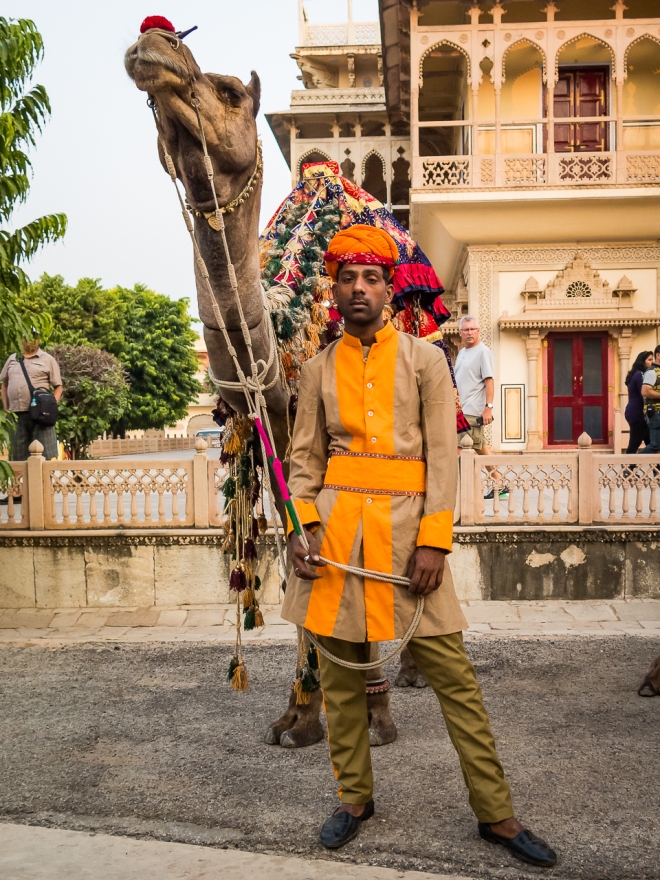 Though I did appreciate the silence. 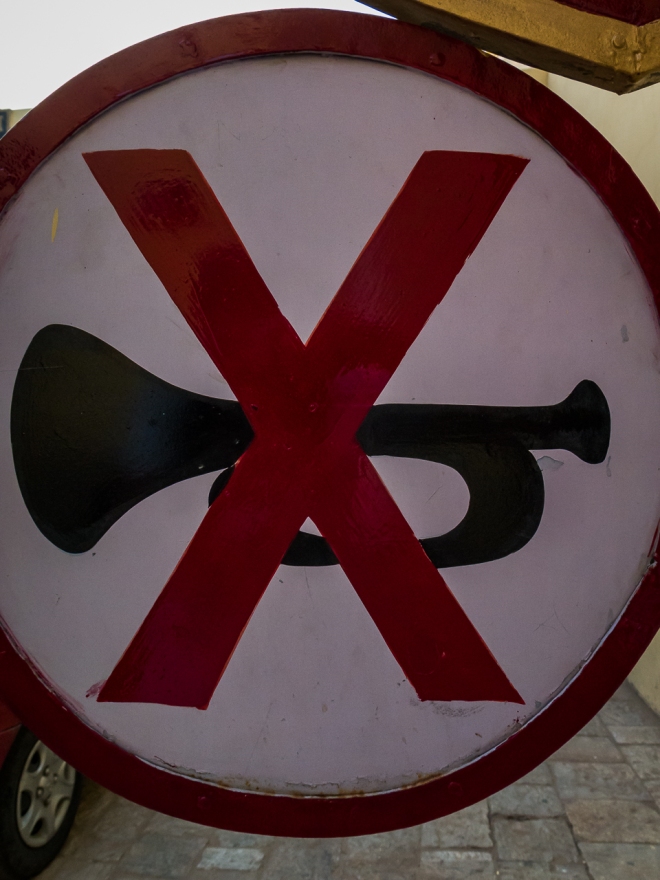 I headed off round the back of the palace, down some streets that I suspect tourists do not generally go, I like back streets. 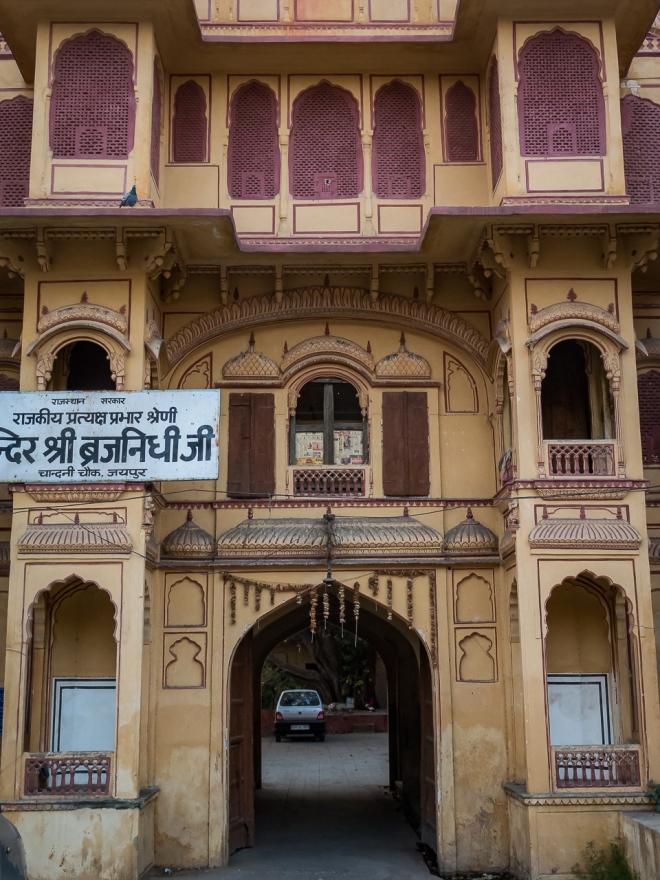 They are quieter and often more interesting – and on the other side of the gates there was a lot less pink! 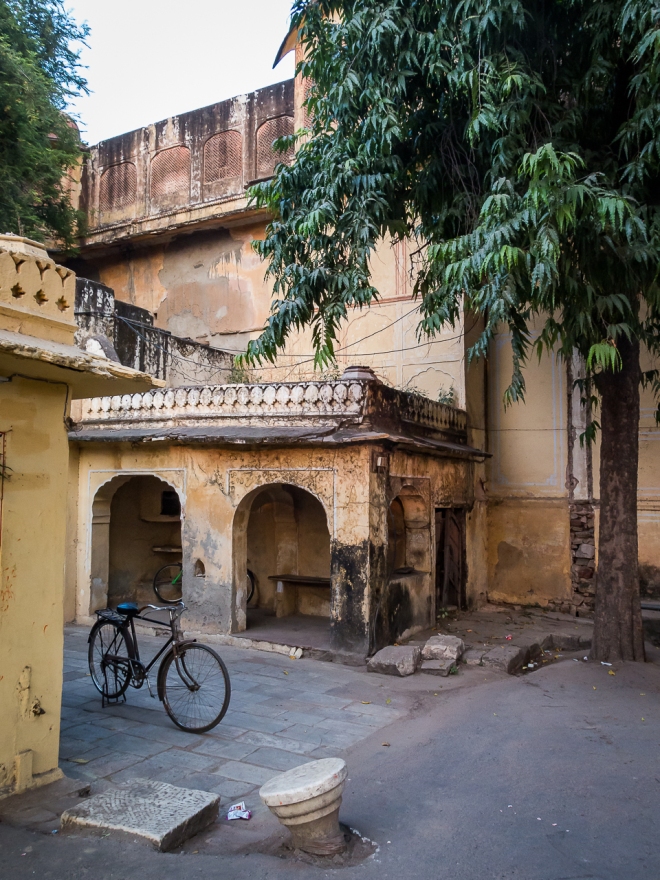 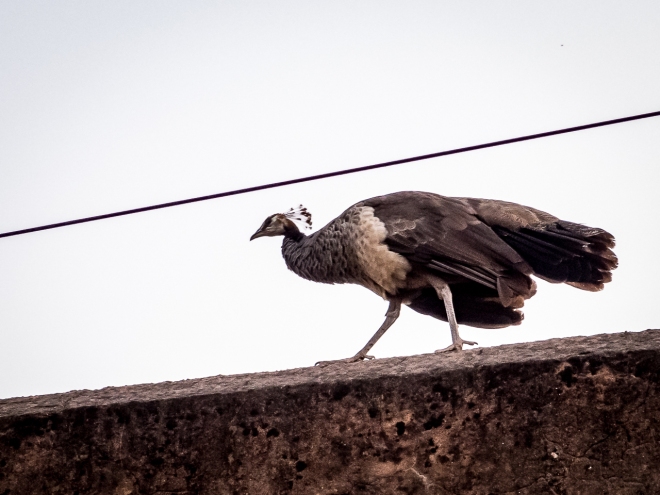 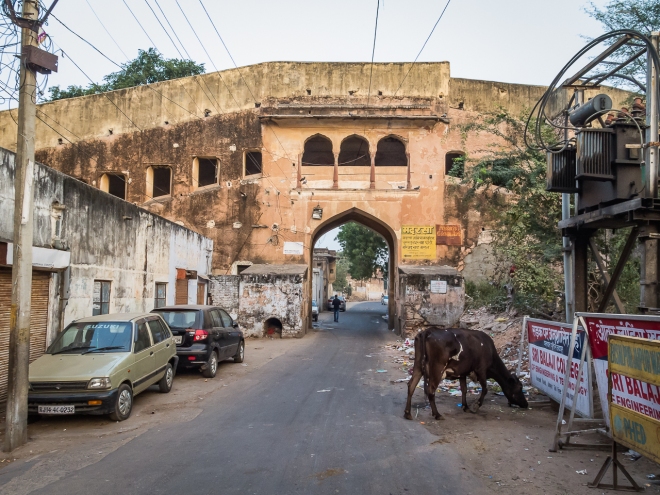 I eventually found my way back to one of the main streets and as it was approaching evening I decided to grab a tuk tuk back to the hotel. Alcohol is almost frowned upon in Rajasthan, though cannabis is, I believe, legal. My tuk tuk driver was smoking a joint and offered to sell me some, which I politely declined. I am not sure if it impaired his driving or not, hard to tell on these streets. 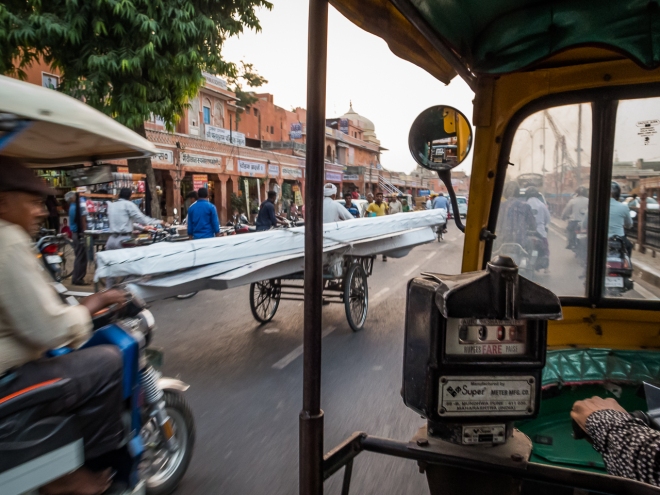 Back at the hotel and verging on darkness I asked the hotel owner if I could buy a can of beer, he pointed me in the direction of a beer shop not far away, but on the other side of the main road. It was a challenge getting across that road, all for the sake of beer! As I walked back up the smaller, one way street the hotel was on, I discovered that having lights on your vehicle appears to not be mandatory, driving a car down a one way street the wrong way, seems to be OK as well. You really need to keep your wits about you. I drank a can of beer in my room before dinner as it is not allowed in the hotel restaurant, it was very nice!

Dinner in the hotel was good, cheap and delicious, though sleep was even better…

5 thoughts on “The Pink City of Jaipur”