Given we were in a seventh floor room overlooking a street full of bars and restaurants it was really quiet in the room overnight, the gentle hum of the air conditioner keeping out any residual street noise and providing a white noise hum to send us to sleep. It was another comfortable night, I don’t think we have had a bad bed once on this holiday – remarkable!

We had breakfast in the hotel, bread, eggs, cheese and coffee while we discussed what to do for the day. We decided to keep it fairly low key and headed out of the hotel aimed for the nearby Hong Kong History Museum. I took a photo of our very skinny hotel. The Perkin. 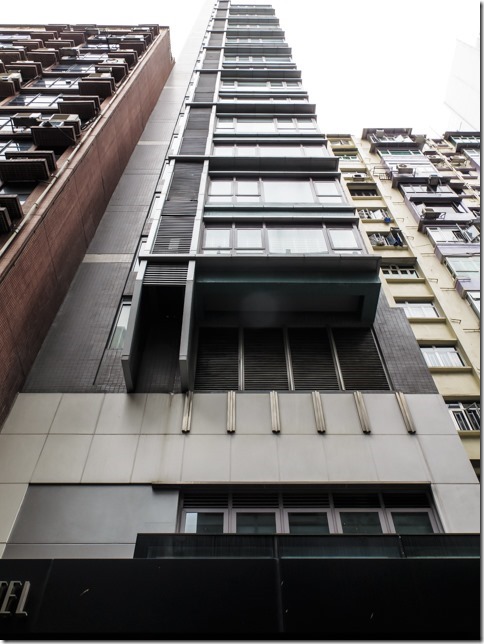 We arrived at the museum just before a large group of young school children. We had only just got started on the excellent History of Hong Kong exhibit before we were overwhelmed by a wave of short people. We let them pass us by before we carried on. They were the first of many groups of children, well behaved children I will say. 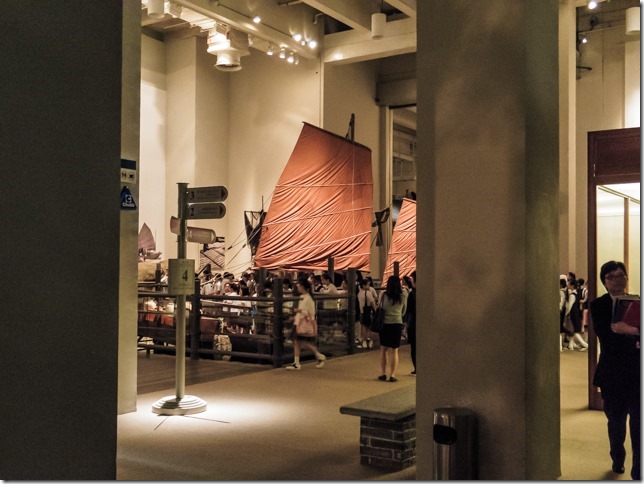 The museum was really interesting, we spent a lot longer looking at the exhibits than I would have expected. Coming from New Zealand I am quite used to seeing Chinese culture around, dragon dances and lantern shows have been a feature of Auckland life for quite some time. Not so in London where there is only a very small Chinese community, and one that is pretty non-existent where we are in the north east. El found the lanterns and dragons and costumes quite fascinating.

As usual I was fascinated by the trees – I love the roots on these young trees, not sure if they are baby banyans.

I also really liked the paper bark trees outside the museum. The bark is incredibly paper like. 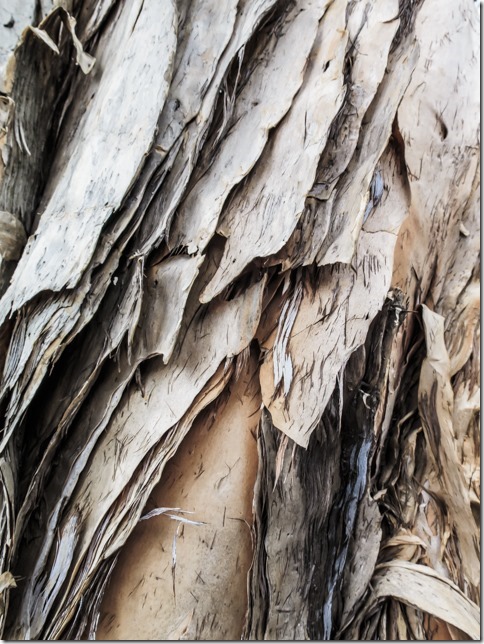 It was lunch time when we hit the streets so we decided to head to the iSquare Tower and check out one of the many restaurants there for lunch. They looked a bit fancy, lots of white table cloths and very expensive menus. We found one that was not too bad, and was nicely high up on the 29th floor. I wasn’t really bothered by the menu, just wanted the view, and it was pretty good. The food was not bad either.

After lunch we took a round-about walk back to the hotel and headed up to Kowloon Park, another one of the big green areas in the middle of town. It is quite a nice park, well patronised by local workers enjoying their lunch as well as plenty of tourists enjoying a bit of solitude and green away from the hustle and bustle of the tourist and shopping areas.

One of the remarkable things I noticed in the park is that no smoking is allowed, highly unusual for Asia, and very welcome. I would like to be all PC and say I stand firmly against global corporations and the evils of companies like McDonalds, but I would be lying – well I am firmly against rampant globalisation, but I do like a cheese burger or two every now and then! We saw some people eating ice cream and decided we wanted one as well, the only ice cream stall in sight was McDonalds and the thought of a vanilla and sweet potato ice cream was too tempting, it was really nice too.

The park had some really good banyan trees to check out, the roots growing down from the branches and working their way into the ground are just quite amazing, nature at its most interesting and wonderful. 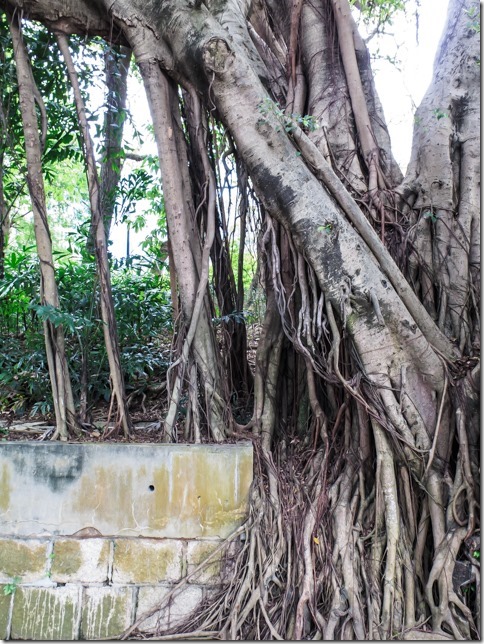 There was a water bird park, with a collection of flamingos, which I found a little bizarre.

I loved the rhinoceros hornbills in the aviary.

As the park edges up against some of the older and more residential parts of Kowloon, there are a number of residential tower blocks nearby, this block was just massive. Growing up in Auckland with a ‘quarter acre block’ – a decent size garden, I am just not sure I could really live in something like that, I definitely could not have children there. Each to our own I guess. If I was born here this would just be normal!

We left the park mid-afternoon and walked back to our hotel, which was not too far away, these two banyan trees made for a nice photo sculpture. 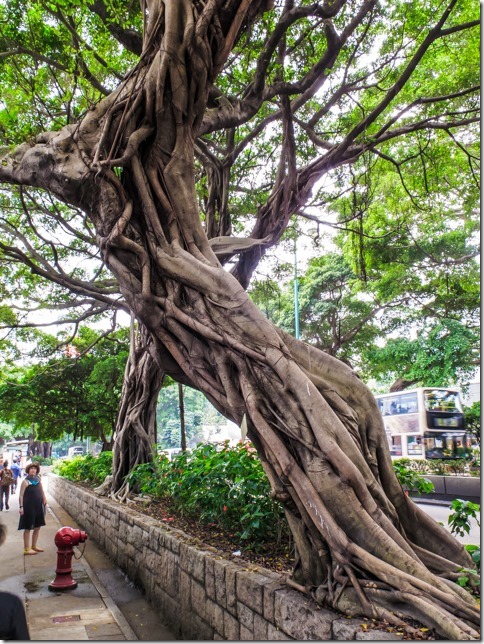 We had bit of a rest in the room before heading back out again, stopping for a glass of wine or two in the bar downstairs. We walked up Nathan Rd past the shopping centre and an entrance to the park we had visited in the afternoon. 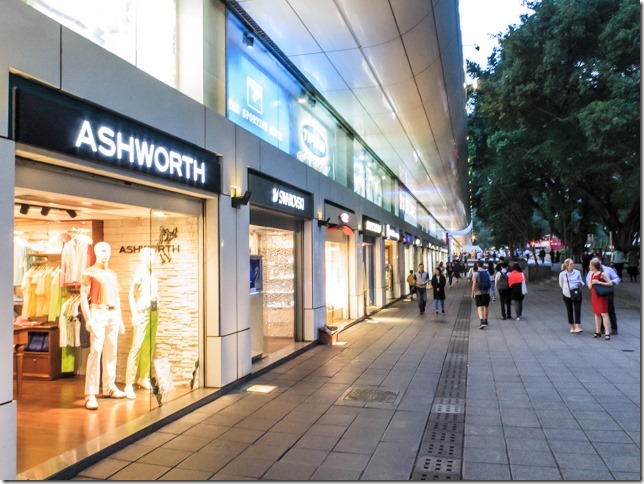 We walked up through the early evening, the streets were crowded and it was nice feeling the buzz of a busy city in the evening. Not having a tripod I didn’t take many photos, and those I did were hand held.

We headed to the night market, and pretty much stumbled across it, sort of by mistake. It was vaguely interesting, as El said at the time it was like Walthamstow market, but dark. Maybe. 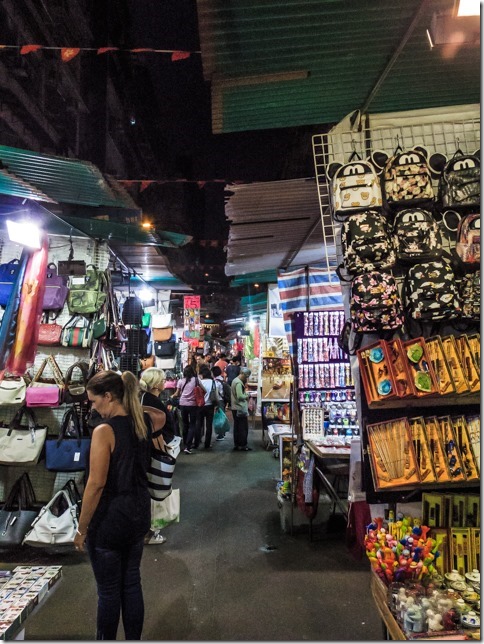 We were going to eat somewhere near the market, but most places were really busy, and we kept on going looking for somewhere to stop, but pretty much gave up in the end.

This place was not a food place and I did cut the first name off, but this is what we first saw when we came across it.

I have been looking for a really good example of a building covered in bamboo scaffolding, and naturally only found one in the dark, the light makes it look even more frightening.

We ended up back by the hotel without finding anywhere to eat so decided to go local and eat Mexican in the same building as the hotel. They did have the most amazing margaritas, massive. I had two

That was pretty much the last act of our Hong Kong trip, and the good news is I survived unscathed, bonus!

The next morning we checked out and headed to the airport for our late morning flight. We had the world’s speediest taxi driver, luckily the roads were clear and we possibly set a record for the transit from down town Kowloon to the airport.

We were all on the plane on time, and were then advised there had been delays ‘in Chinese airspace’ and we would held on the ground for between 90 minutes and 2 hours. Joy – we already had almost 13 hours in the plane ahead of us. It was not the nicest flight, long and boring and I watched a stream of really bad movies.

It was a day time flight and as we were heading west we followed the sun all the way. There were moments when the sky below was free of cloud and the scenery was amazing, miles and miles and miles of nothingness, desert and dunes and occasionally a road blasting through. I assumed we flew over Mongolia and the Siberian steppes. I tried to take some photos on El’s camera but could not get to focus much past the dirt on the window.

We landed in London a little late and that was the end of the holiday. A good holiday!

I love this photo El took of me yesterday, my favourite holiday photo. I looked relaxed and by this stage my legs were not radioactively white.