As this New Zealand trip is a large part of El and my holiday allowance for the year I snuck a few days away for just the two of us amongst the family and friend visits. Family and friends are a crucial part of my visits back to NZ and I really enjoy them, but after long flights and jet lag I find them stressful and draining as well – especially trying to fit everyone who wants to see us in to such a tight schedule. El and I were both looking forward to going away by ourselves for some R and R. Naturally I planned on squeezing in touring and road trips and sightseeing and as much as possible. I never learn.

I wanted to go up to Cape Rienga, the most northly tip of New Zealand, the only other time I was there was in 1975 – mum and I think so anyway. It is pretty much a new bit of New Zealand for both us, though I have been as far as Omapere before. It is a long drive from Auckland so I broke the trip up over three days so we could relax a bit and see a few other things on the way up, and down again.

It was a slow start to the day, we left mum’s place at 9:30 and after a wrong turn here, some incredibly bad traffic there and some stupid lane choices and getting stuck going the wrong way on a non-moving motorway it was an hour before we actually were officially ‘on the way’. I had elected to go up the western side of the island and come back down via the eastern.

By some sort of miracle, it was a stunning day, warm and sunny and perfect for driving. I have slowed down a lot on the last few years, Kiwi drivers are notoriously awful, not madly suicidal like some countries, just rude, arrogant and ignorant. I was that person behind the wheel. No longer; cruising ‘up north’ at a sedate pace was the order of the day, enjoying the reasonable quiet off-season, mid-week roads, and some great scenery.

Our first stop was Matakohe, at the Kauri Museum, we decided not to go into the museum as it was a bit pricey, but we did look in the shop and I took a couple of photos of some of the buildings outside. I have a thing for the old churches in Northland, I have a few photos from ‘back in the day’ kicking around somewhere. I was going to stop and take photos of as many as I could, but only managed to grab a few. They are quite unique, mainly built in the latter part of the 19th century when Anglican missionaries flooded into the country, they are small, wooden painted white, often with a red roof. They look lovely. 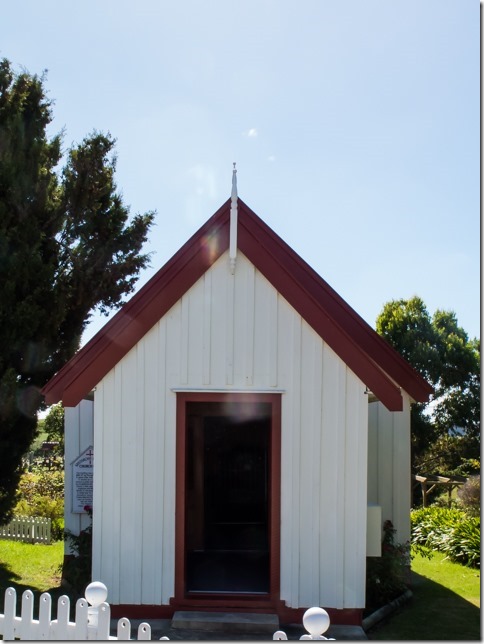 The old Matakohe post office – also lovely. New Zealand’s history is not very old, there are no ancient buildings, but the ‘old’ buildings are quiet unique to New Zealand. 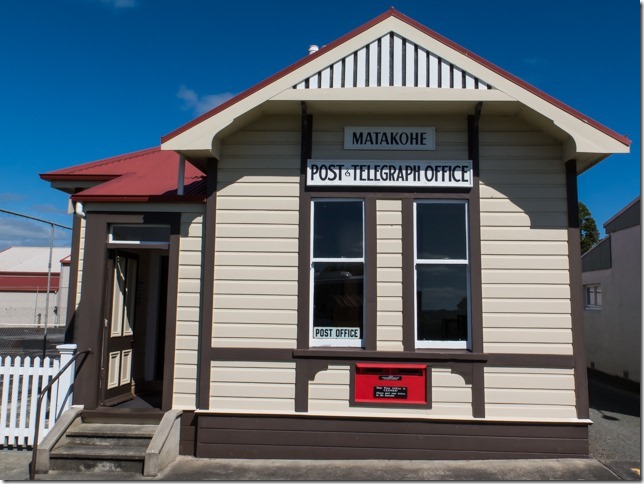 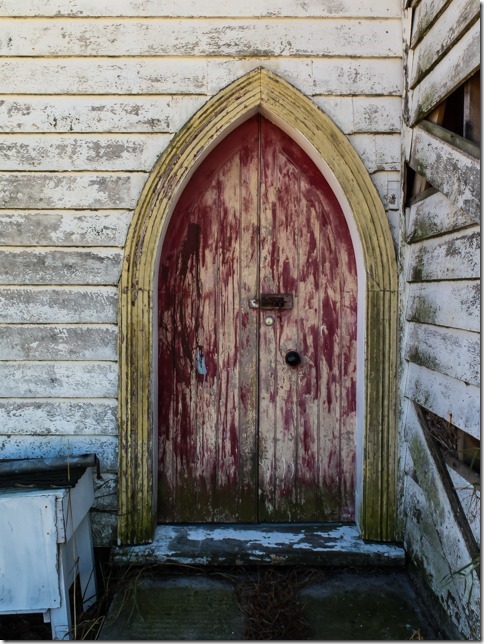 After a pretty reasonable, though quite expensive lunch in Dargaville we were soon heading north again up to the Waipoua Forest. The Waipoua is one of the largest areas of northland kauri remaining in New Zealand, and I was keen to stop briefly to see Tane Mahuta, New Zealand’s biggest kauri tree. The road north was surprisingly good, a lot of work must have been done here in the last few years, though it is pretty windy and we got stuck behind someone going really slowly and the Kiwi driver came out in me for a while and I was muttering and cursing for the ten minutes we were held up.

We stopped by the Waipoua River to take a couple of photos of the river and some of the other kauri growing. 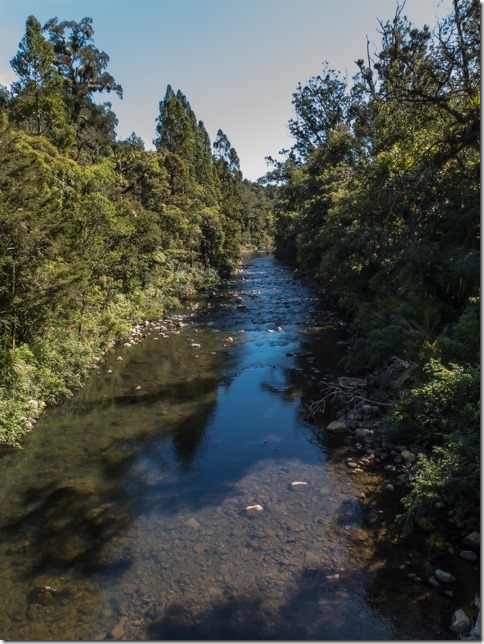 After a leg stretch, we were back in the car and finally stopping at the entrance to the short path to the big tree itself, Tane Mahuta ‘Lord of the forest’. It is not a particularly tall tree at only 58 ft tall, but it is 45ft round and looks massive. It is quite impressive up close.

The tree is accessed via a board walk to prevent visitors from trampling too close to its roots, as the bush is quite dense the tree almost appears by surprise when you walk round a gentle bend in the path. I have been a bit obsessed with taking photos with a bit of flare in them but went full flareage here ! 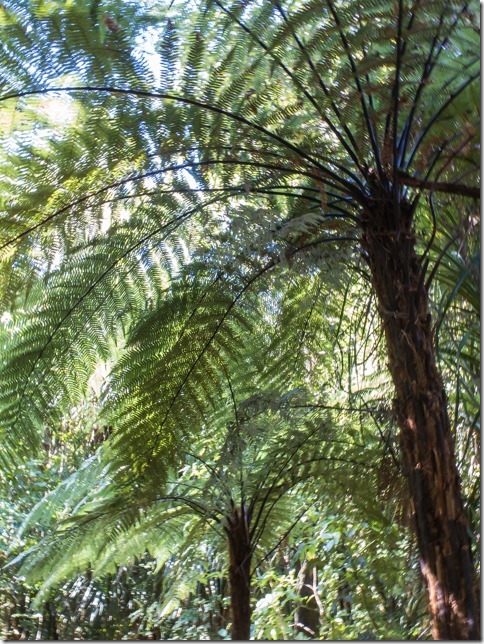 It is only a short drive from the Tane Mahuta car park to our final stop for the day at Omapere on the edge of the Hokianga Harbour. There was a viewing point at the top of the hill above the harbour so we stopped to have a look. I hadn’t really told El much about the places we would be staying and she was really excited to know that we were in a small hotel right next to the wharf in the bottom of the photo. What a view !!!

I had booked a room on the internet, but had not really specified any particular requirements, once we were there I asked if we could upgrade, for a nominal increase in cost to a beach view room, and thankfully we could. Wow ! out of the room, on to the ground level deck, across a small stretch of grass was sand and then sea. We could not be any closer. After nipping back up the road to the shop to get a bottle of pinot gris, I was togs on (NZ for swimming costume) and into the sea. My first swim in 18 months. It was cold, but not too bad, El watched…

Once dry and refreshed with a glass of wine, it was camera out and I took a lot of photos as the sun slowly sunk into the sea in front and to the side of us, the golden hour was truly golden.

The sky started off with a nice set of clouds and I was really looking forward to a great colour show once the sun dropped out of sight below the horizon. 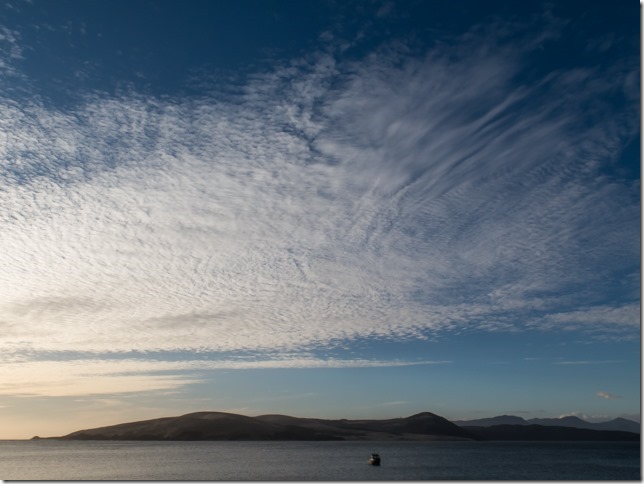 However it was not to be, as the clouds slowly dissipated before my eyes and the wild red and purple sky that was in my head did not materialise. It was very special all the same. 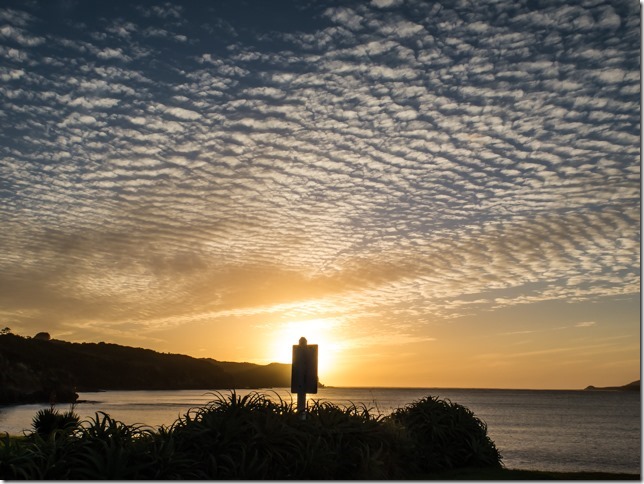 A great start to our road trip, tomorrow is Cape Rienga!