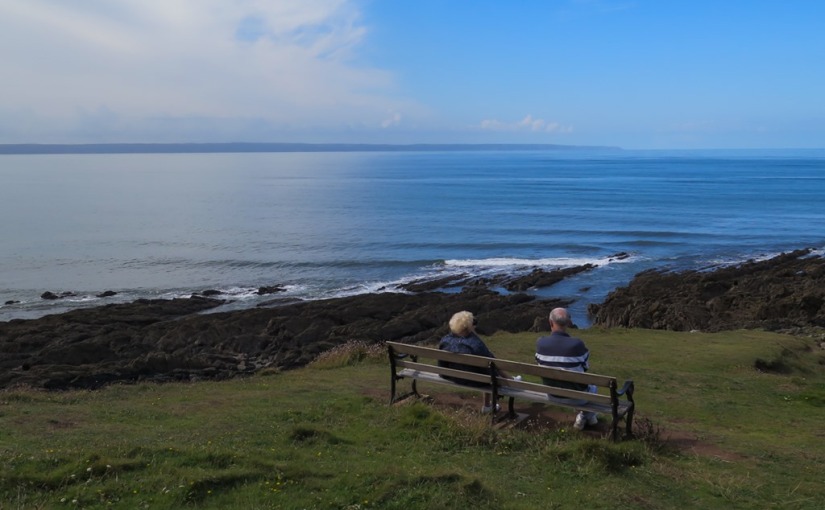 I was surprised to get off to sleep reasonably quickly, sort of anyway, but I was awoken at 3:00 by a small sick child, coughing and crying, crying and coughing for a good hour. I did sympathise a bit, but really could have done with the sleep. Earplugs only blocked half of it. My penance for some prior life sins is to be a light sleep who is easily distracted by noise. At least it was not cold !!

My original plan was to cheat a bit around here, walk to Braunton and then catch a bus to Westward Ho!, skipping the entire section along the River Taw. I have been here before and it is flat, and a bit dull and a lot of it is on the road and through towns. I would then walk from Westward Ho! back on the coast proper. This morning I decided to vary this a bit further and stay the night in Barnstaple. I want to send some stuff back to London, lighten my load by a kilo or so, plus I realised I only had map and guide as far as Bude and no idea beyond. Even though Bude is three days walking away, Barnstaple is the last decent size town so it seemed like a good idea, so I booked a room in a cheap hotel, which was only slightly more than this camp site.

I was up at 8:00, breakfasted, packed and on my way in under an hour. My knee is really sore this morning and I also appear to have a slight blister forming on the top of one of my toes. Volterol on the knee and band aid on the toe. Sorted.

The official path follows the beach along the back of the sand dunes, rising and falling with them. I thought stuff that and walked along the beach. It is a lovely beach and very quiet at this time of day. It is still not easy easy walking, at least it is flat ! 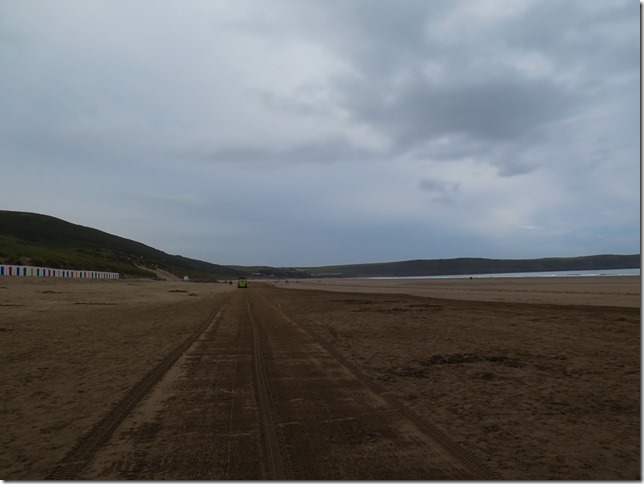 Though that did not last that long, and it was soon back up on to some, admittedly, quite low hills as the path meandered around Baggy Point. The camping ground I saw from the Woolacombe end of the beach is a caravan park, so I am glad I did not make my way here last night in the hope of a smaller and quieter place to stay. 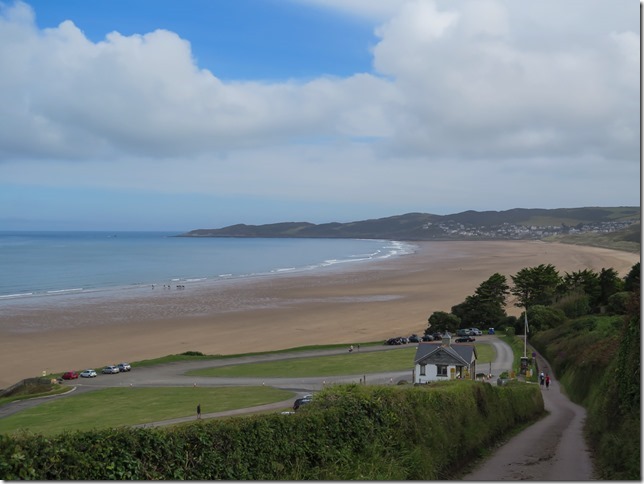 I don’t think I took the official SWCP path across the point as I ended up pretty much in the middle of the point rather than on the edge, with my knee still sore I decided to not head off in search of the proper path, but carried on going along the one I was on. I did find this old standing stone. Apparently there are four standing stones on the point and no-one knows what they were for. They just are, always have been, and hopefully always will be.

I was soon down on Croyde Beach, this is a bit more my sort of place than Woolacombe, a bit more proper surfy and outdoorsy. I sort of liked Croyde for the few minutes I passed through from Baggy Point down to the beach. I picked up a coffee and stopped to do some running repairs on the band aid on my toe – and to shake all the sand out of my shoes to prevent any further damage.

There was another small climb up out of Croyde Beach and on to the headland at Downend .

There are lots of little gates and styles on the path, most of them are OK. This one was not too bad, but some are so tight that I could not fit through with the pack on my back, which was a bit frustrating. Most come with a nice combination of stinging nettles and thorn bushes, and the best ones have a nice unavoidable puddle in the middle as well!

The view down over Saunton Beach, to the River Taw way off in the distance.

At the bottom of the hill and on the road in Saunton I decided to stop for the day. My knee was still a little sore – my left knee, which is unusual. If it had been pain in my right knee I would have just gone on as it always gives me grief – though there not a twinge from it on any of the days of walking. There was miles of flat walking to Braunton which was where I was going to stop, so as I was right next to a bus stop and the next bus was 7 minutes away I caught it.

That effectively, was the end of my walking. My plan to do 16 days ended after 4 ½.

I caught the bus in to Barnstaple and dumped my pack at the guest house I was staying in, I took all my dirty clothes and a shopping list and went in to town. I got everything done, except find a book on the path from Bude. Laundry, lunch, posted a box load of stuff back home, a good administrative afternoon. Wasted really.

I made the mistake of checking out the weather forecast while lounging in my room waiting for tea time. A bad mistake as the forecast was pretty awful for the next week, showers tomorrow and then thunder storms over the weekend. This put me in a bit of a slump. I was a bit sore, I was a bit lonely and the weather was not looking bright. I went off in search of solace, or wine. Whatever you want to call it. I found a nice quiet bar, had a few drinks (not too many) and some really excellent food , which perked my spirits up.

It was still early when I made my way back to my lodgings, I walked along the path alongside the River Taw and its lovely medieval long bridge.

I liked Barnstaple, it had a pretty good feel to it, I liked that it was not pretentious and showy, it is what it is, a working rural town, but with some interesting stuff. I liked that it had an old closed cinema, just like the one at home in Walthamstow. I hope it gets reopened one day.

I decided to see how I felt in the morning, if my knee was still playing up after breakfast and a gentle walk then I would quit and head back to London, tail between my legs. I was not overly happy with that decision as it was a big dent in my pride, but it seemed to the right thing to do.