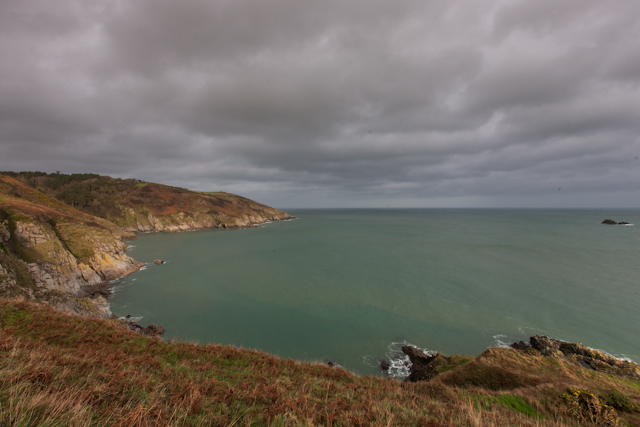 Seeing as I am back on the road again, if only for a couple of days, it seems only fair that I continue with my traveling tradition of starting each blog post with a mention of how I slept the night before, poorly in this case. My room in the Cherubs Nest B and B is nice, comfortable and warm, I was (am) tired, but I did not sleep much at all and was awake before 6:00 as usual. I did not get up though. I was the only guest so enjoyed a really nice breakfast on my own, fueling up for the day ahead.

The forecast was for a cloudy day with no rain, so I decided to go west and walk from Brixham back to Dartmouth, via the ferry at Kingswear, a ten(ish) mile walk on the South West Coast Path. As is usual I woefully under-prepared for the walk, I did not take anywhere near enough water or snacks to munch on and perhaps should have tossed my head torch in my bag as well.  On the plus side though, I did have warm and waterproof clothing. Ten miles is not that far in flat London with corner shops every few hundred yards, but on a remote, muddy and often steep coast it is much harder going. I also did not fully realise how unfit I am for this sort of terrain, yes I can knock off an eight mile run on the flat without too much bother, but wow I have missed doing hills.

I left the Cherubs Nest about 10:00 and headed down to the nearby waterfront to catch the ferry over to Kingswear. There are a few ferry services crossing the River Dart, but the lower car ferry is the most frequent, crossing every few minutes, and it does take foot passengers. 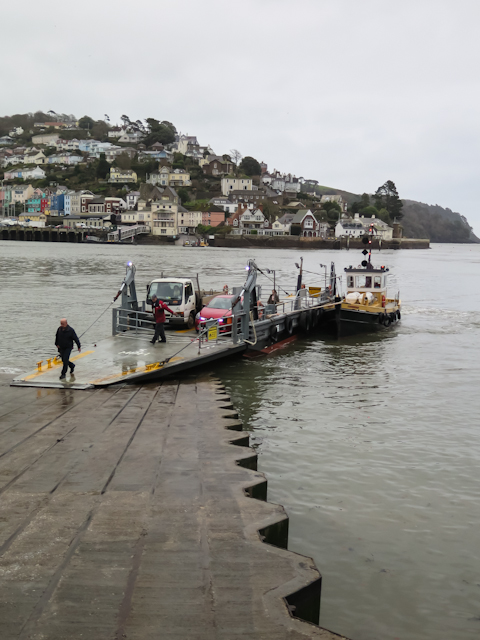 It is also a good spot to get a photo of some of Dartmouth old town. I really like towns on steep hillsides!

The ride to Kingswear is only five minutes and the bus stop is just up from the ferry, luckily there was a bus about to leave as I arrived.

The journey to Brixham was interesting, a bit ’round the houses’ as they say, and some of the houses were not exactly ones you would want to go round either. I have this rather romanticised view of what remote coastal villages and towns look like, all olde world stone and wood, with a thatched or tiled roof, occupied by wonderful friendly folk. Unfortunately the real world is not like that and outside of the original ‘old town’ part of these places, partly hidden from view – unless you are on a local bus, there is the usual swathe of cheap housing filled with those less fortunate than I. Brixham was like that.

Brixham is a commercial fishing village and I did see a sign that said it was the birthplace of trawler fishing, I marched on through. Though I did love these tiny old crabbing boats.

One of the things I recalled with little pleasure from supporting Mal on his run of the South West Coast Path was how poorly it was sign posted in and on the fringes of towns, and I definitely remember Brixham was no exception. I headed in the right direction, but ended up at a swanky hotel at the start of the headland, I wandered up a side road and just happened to come across the path again at Berry Head. 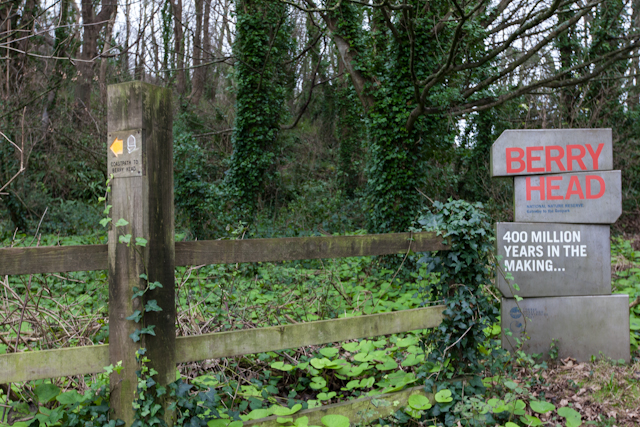 As I wasn’t planning on sticking religiously to the coast path I was going to walk across the headland rather than around it, but once I was up there I was surprised to find an old fort. The forts that remains – there are two of them, were built around 1800 – sadly on top of Iron Age forts, to defend Torbay against the French. All that was left of the first fort was the very solid external walls and a (surprisingly open) coffee shop and information centre inside the walls. 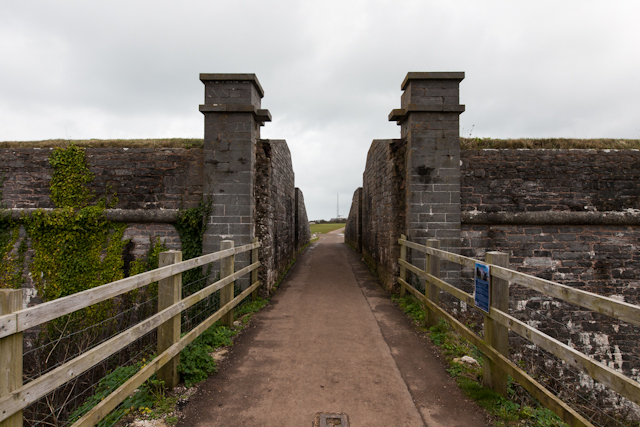 Berry head is also well known for migrating birds, and there are a couple of hides, but this was very much out of season. 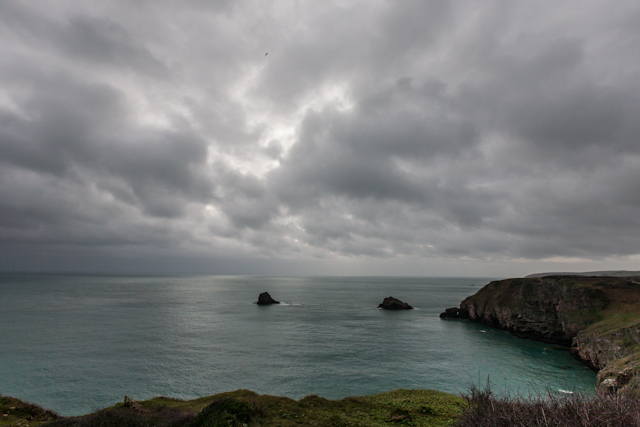 The second fort has a few more ruins in it, and I had a few minutes of fun trying to get decent photos before I realised with a minor sense of panic that it is almost the shortest daylight day of the year, I have ten miles to walk and it is 12:00. I have four hours to get to Kingswear before it gets properly dark, this seems like an extraordinary amount of time to walk ten miles, but there are no villages between Sharkham Point and Kingswear to exit the path and get a bus from, plus I want to take pictures on the way. So I left. 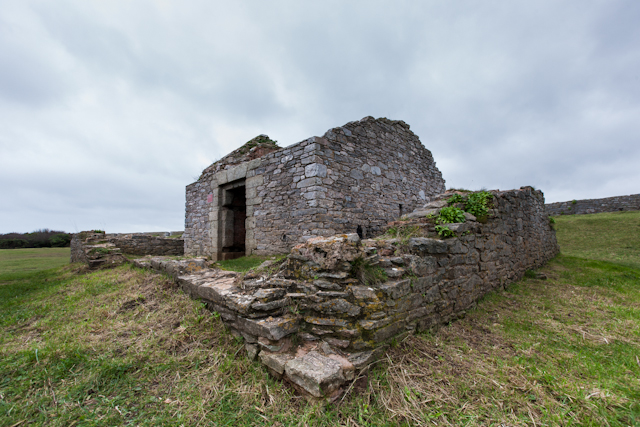 St Mary’s Bay is very picturesque, though I did hurry past, casting my eyes in land only quickly.

Just past the bay I came across a sign that almost made me turn back enjoy more of St Mary’s Bay and the old forts and then catch the bus back.

I was worrying a little about time as I had not planned on having to take a detour, understandable as half the cliff face had fallen away. This detour took me back inland and around a recently built and monumentally hideous housing estate, and then dumped me on a street with no indication of which way to go. I headed back towards the coast and fortunately found the path again. I suspect the temporary signs had long been removed.

I slung my camera bag back on my back, fastened the straps and started jogging on the down hill sections, I wanted to try and recoup some of the last time faffing on the detour, and soon enough I was well on my way, back on the path – and at the top of one of the in-numerable climbs. 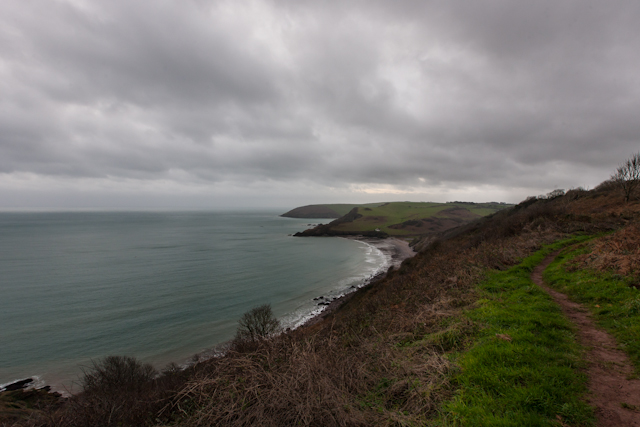 Soon I was heading down towards Mansands Bay. 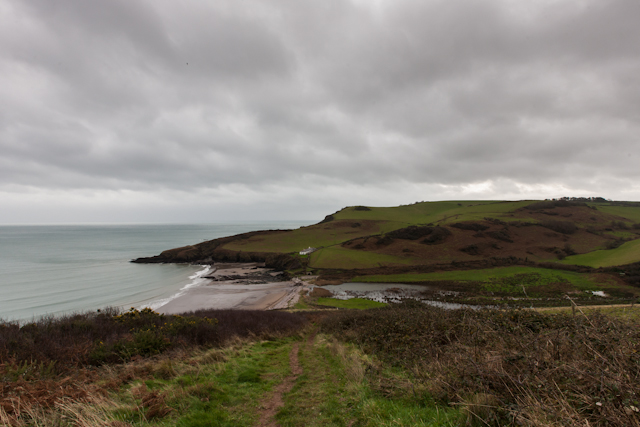 Where I came across a sign telling me I had 6 miles to go, at this point I realised I was probably going to be fine, getting back an hour before sunset, though I did not slacken my pace that much. 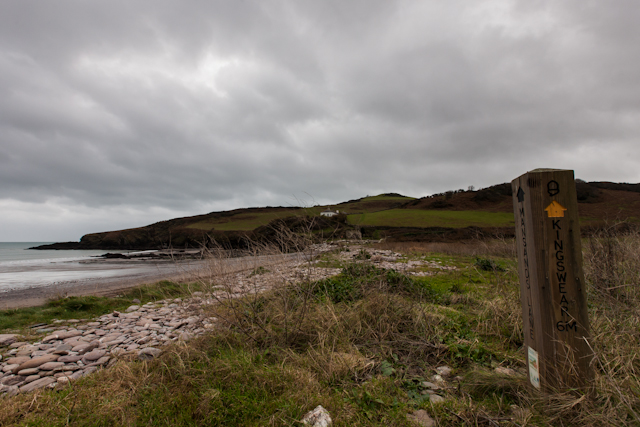 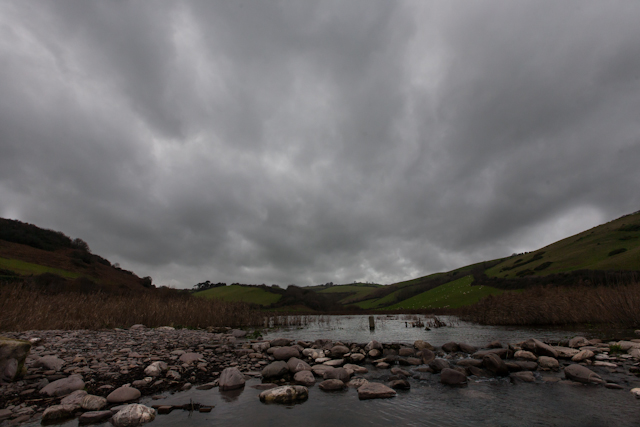 The climb out of Mansands was pretty tough, not long but really steep, and this was just preparing me for the climb out of the next bay which felt like it was near vertical in parts. But the view was worth it… 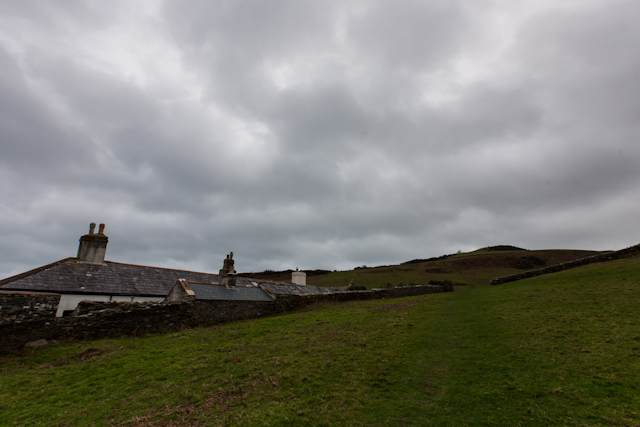 What made the climb out of the next bay worse was that it had been used by live stock recently so it was completely chewed up, really muddy and a bit smelly.

And the steep grassed section was quite greasy in parts, I was almost crawling at the top. 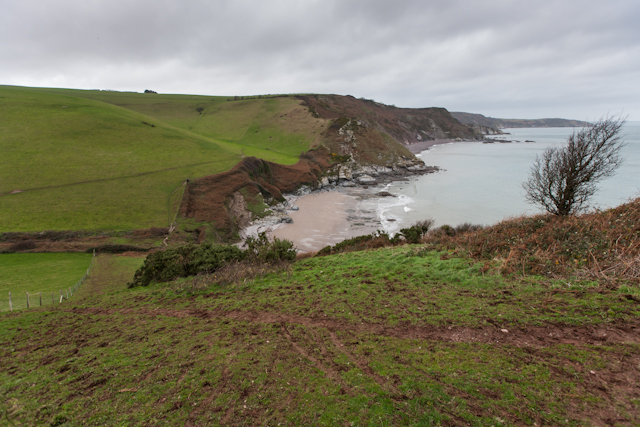 For the next hour or so the track moved across the cliff tops, dropping down to small bays here and there and generally offering a constant array of beautiful scenery to gaze at. 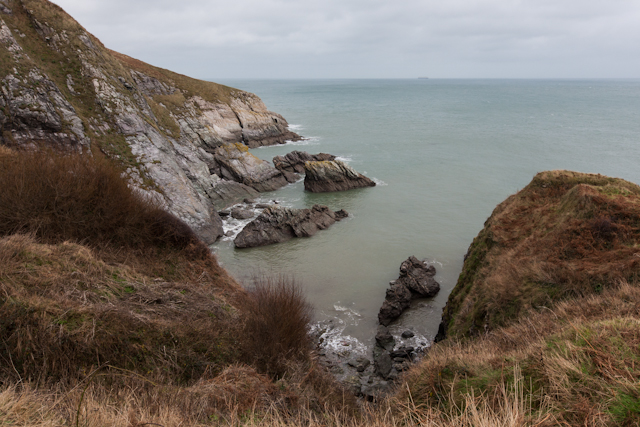 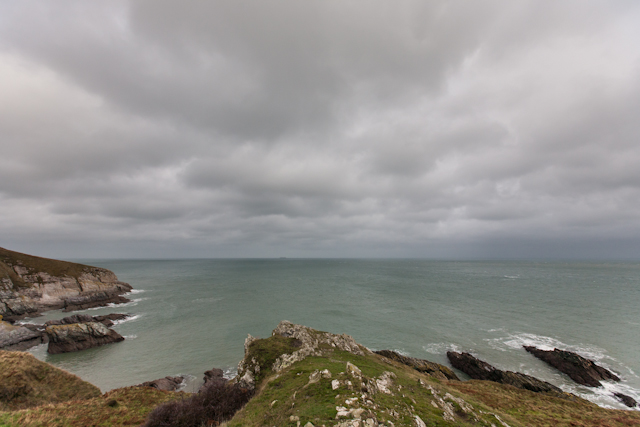 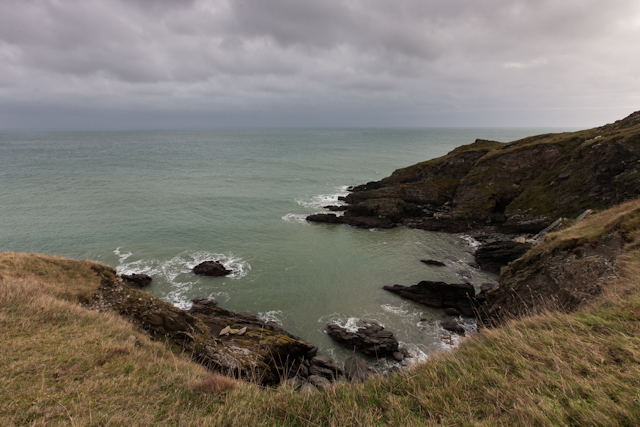 The track was quite cut up along the tops and I could see horse shoe prints in the mud, I was getting a bit pissed with the person that decided riding a horse up here on these narrow trails was a good idea, and then I discovered the source – a bunch of Dartmoor Ponies had been released here. That made much more sense! 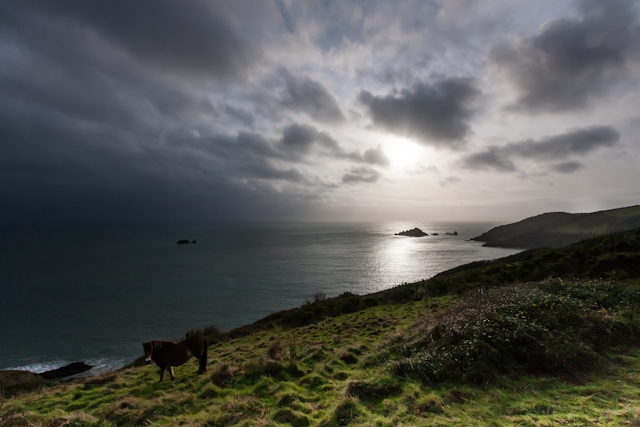 I think this is Old Mill Bay.

A last look back west.

I reached Froward Point about 2:45 and was thinking how well I had done in getting to Kingswear so quickly, before I saw a sign advising me I had two more miles to go. By this time I had only a couple of mouthfuls of water left and had long eaten my two muesli bars. Even though it was a little windy on the tops I had gotten a lot warmer than I had expected with my mix of light jogging and power walking had subsequently sweated more than a small bottle of water was good for. I was thirsty!

Mew Stone and Shag Stone from the point.

The walk from the point into town seemed to take forever and my lack of hill fitness was showing on the climbs as I got quite slow. There was a good view of both Kingswear and Dartmouth Castles through the trees at one point, which I ruined with a bad photo.

I was hoping to walk past the castle, but discovered that it is privately owned and is not accessible, or even readily visible to the public. Shame…. I did find this small tower though, which partly made up for it. 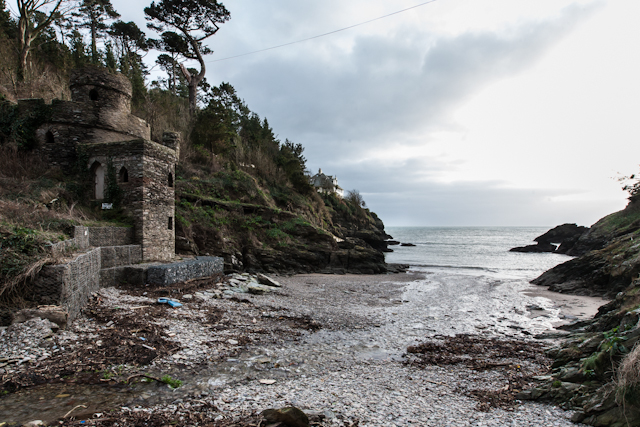 Soon after that the path ended and I was on the edge of town. 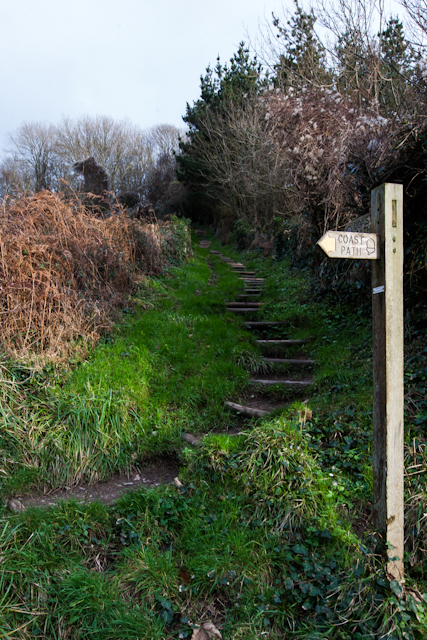 I found a tap outside some flats that were empty so I refilled my water bottle with some rather earthy tasting but very refreshing water, said a small thanks to the absent owners and carried on marching into town. 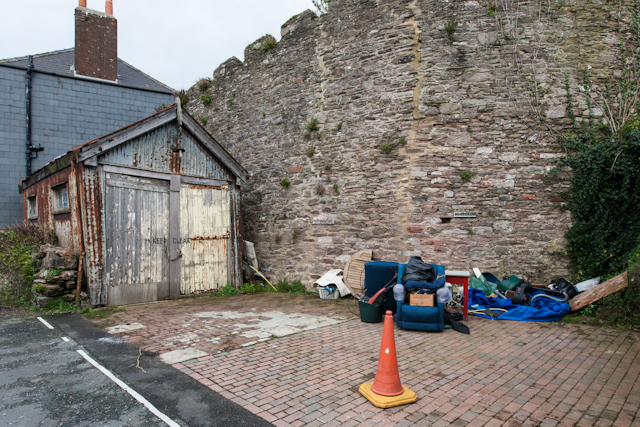 Just down by the ferry I found a sign pointing back the way I came, and for the first time I had an indication of how far I had travelled, I was not 100% sure at the start. 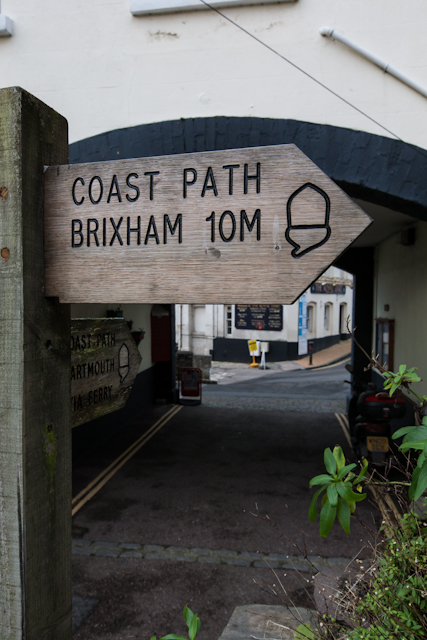 And then I was on the ferry back to Dartmouth. 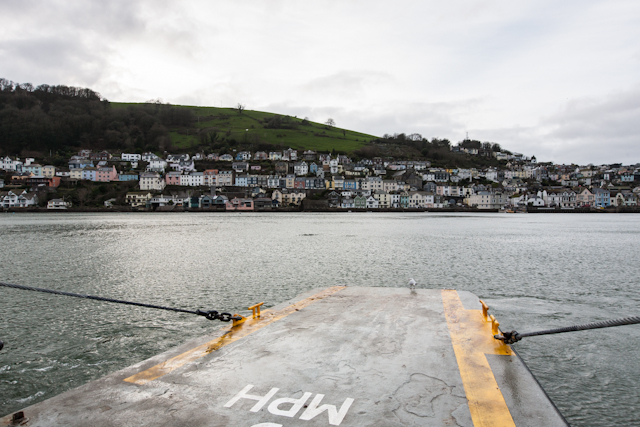 My first stop was one of the few cafes that was open and serving food for a very late lunch and a much needed coffee. I was a bit rank, a bit muddy, and very hungry! I ate and left (for the benefit of the other customers) and headed back to the B and B for a shower and a sit down before tea. I was knackered….

2 thoughts on “Brixham to Kingswear – a walk on the South West Coast Path.”