It was a much cooler night last night, so some sleep was had, though we were up quite early as a group of Aussies decided that outside our open ground floor window was a good place to smoke, drink coffee and chat – loudly. I spent the next thirty minutes hovering by the window waiting for a courtyard table to come free so I could nip down and grab it, breakfast outside was so much nicer than inside. I am happy to report that today’s bacon was as good as yesterdays. Though I did eat some fruit today so that completely balanced out the body weight in bacon that was consumed.

Today we are off to Malmo in Sweden, it is the 58th country I will have visited, and most of those have been in the past two years of travelling as well, I had visited Denmark in 1987, though not Copenhagen, so it this is my first new country since Sri Lanka last year. After checking out we headed over to the station to find tickets to Malmo on the train that heads over the famous Oresund Bridge. We were dead keen to cross ‘The Bridge” and it was one of the reasons we came to this part of the world, the bridge is the bridge in “The Bridge” 🙂 and one of the longest bridges in the world. As we found out on the internet before we took the ride, you don’t actually see the bridge at all on the journey as it is a straight line ! Oh well, it was worth it anyway.

Though we crossed into a new country and had passports handy, they are not required. Malmo in Sweden is not much more than thirty minutes by train from Copenhagen in Denmark and it was a quick and painless journey.

We enjoyed our couple of hours in town, there was a good map available at the train station and though we didn’t really have much of a plan of what to see I was quite keen to visit St Peter’s Cathedral. The modern art museum was sadly closed on Mondays – as were quite a few things in Copenhagen as well.

St Peters is the oldest church in Malmo and construction was started in 1391 with the tower being added in the 1500s’. It had some incredible frescoes painted on the walls, but these were largely destroyed when most of the interior was white washed in the 1800s. I think I read it is the only white washed cathedral in the world and visually it is quite stunning. 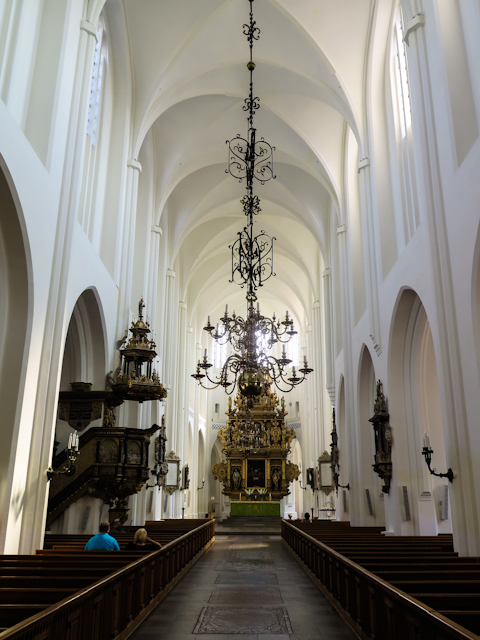 I really liked the metal tombs in the floor, and wonder how many thousands of feet have walked across them since they were laid down. 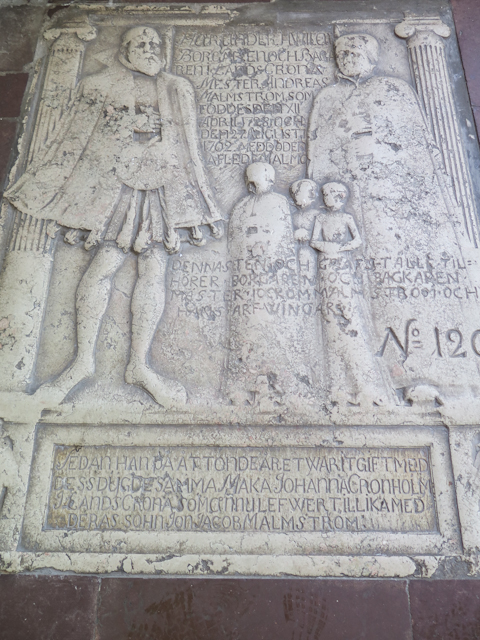 The one small chapel with frescoes was beautiful to look at, the frescoes were painted in the 1520’s and are pretty much in original condition, slowly fading away. Just lovely, and the reason I wanted to visit the cathedral.

We took a walk around the main old part of Malmo, which is within a small canal system, Malmo was a lot more how I expected Scandinavia to be, clean and tidy and the buildings here were nicely presented and charming. 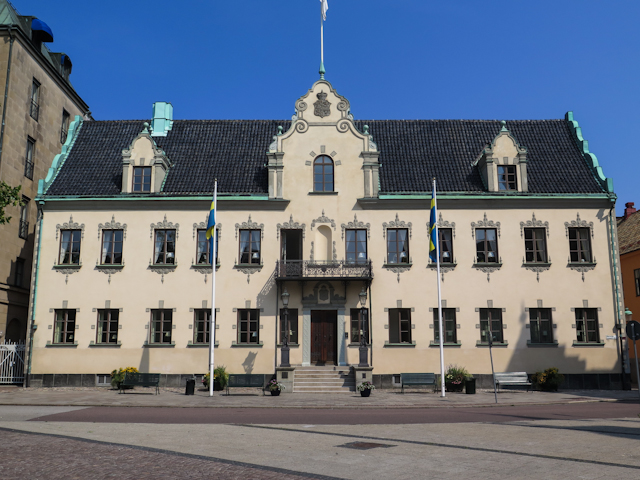 The main square was a bit touristy with most of the old buildings turned into restaurants with big ugly awnings outside, so no photos. We wandered back alongside the canal to the station, and back on the train to Copenhagen. 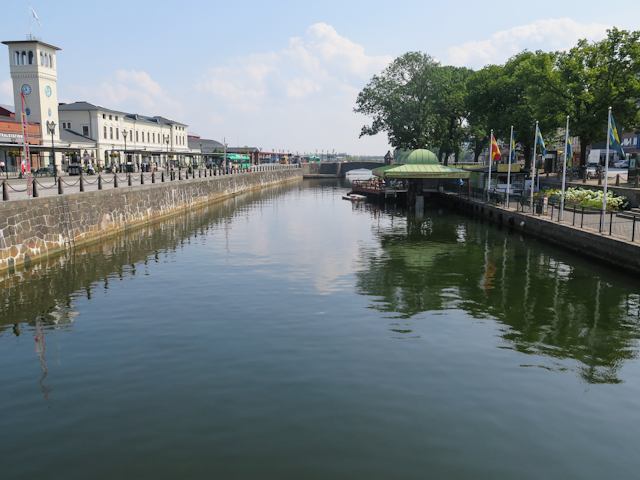 Apparently balloons are banned on the platform! 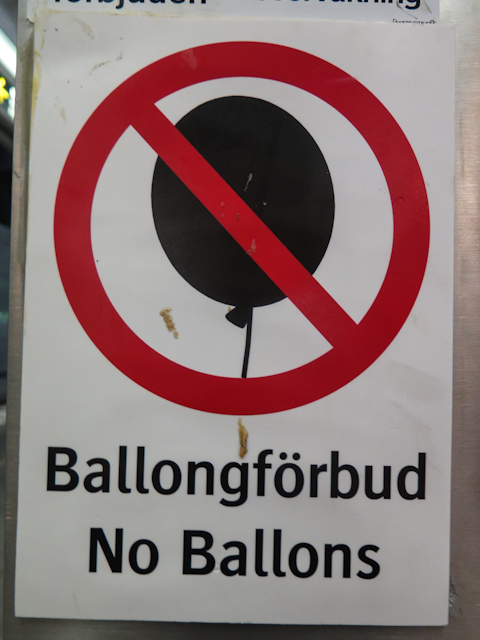 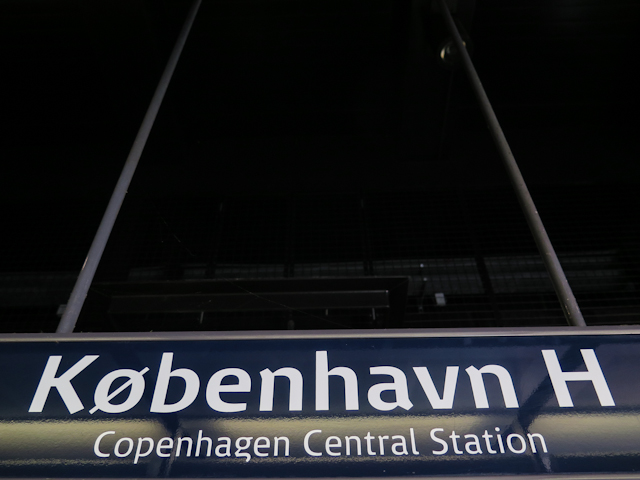 Back in Copenhagen we walked up from the station to the botanical gardens, it was another lovely, though hot day and a welcome wine under a tiny bit of shade outside the hot house was most welcome. 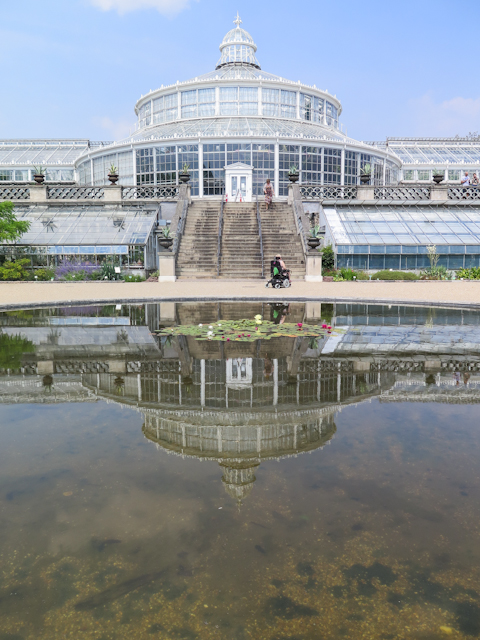 We had another couple of hours to kill before we needed to head to the airport so we wandered back into the city centre, passed the round tower, looking for some lunch. 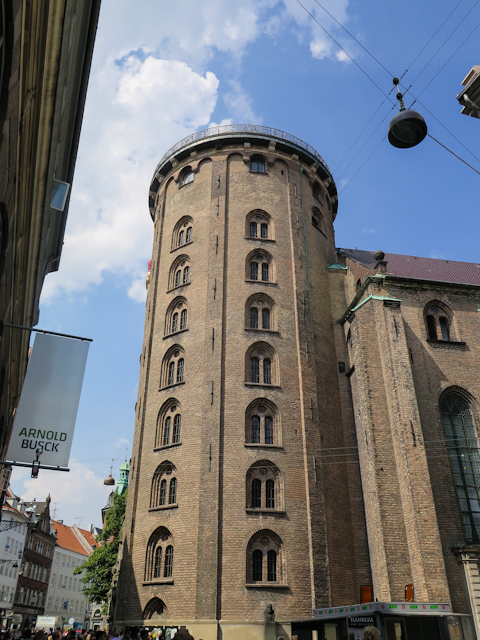 We found a nice little square off a much larger square at Grabrodestraede and had a really nice lunch at Cafe Flottenheimer. The food and homemade lemonade were excellent and the location was great for people watching and grabbing an ever so slight breeze under the shade of a tree. Another eating recommendation!

The larger square looked nice for lunch as well.

We took a final walk back down to the Christiansborg Palace area to find this damn fountain from the TV series Borgen. We had been looking everywhere for it, we did find a fountain, but it was not the right one – again. Maybe it just does not exist! 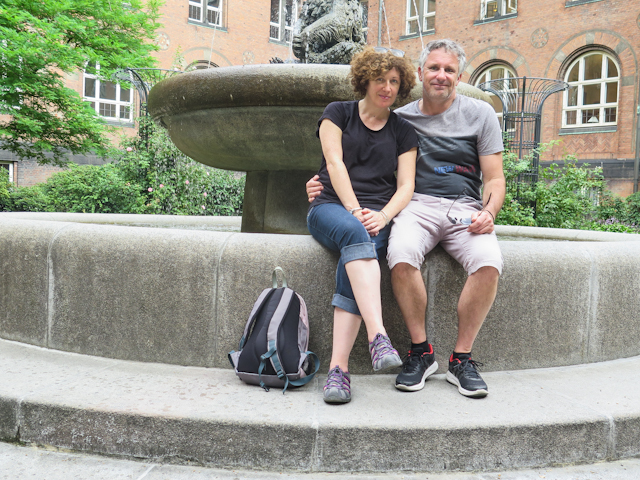 And that was that ! Our next trip was back to the station and on to the airport for our flight back to London. We arrived nice and on time, two hours before the flight, just to find that there was at least a two hour delay… We tried to swap to an earlier Easy Jet flight into Gatwick, but were not willing to pay full fare for it. So after checking in we mooched, me rather grumpily, around the airport for a while before heading up to the main departure lounge. It was bit disappointing up there, there was little or no aircon, and I was still hot and sweaty from the day, and a bit uncomfortable to be fair. There were not enough seats for all the people hanging about, we managed to get a seat in a bar where I drank the most expensive pint of piss poor beer that I have ever had in my life(it was soi bad I had two), plus I wasn’t willing to sign away my children’s inheritance to access the free wifi. All in all not a pleasurable experience, sorry Copenhagen Airport, nice and modern as you are, you are no fun if your flight is delayed. Though we did share a nice pizza 🙂

The gate for Easy jet is the furthest possible from the main part of the departure lounge and quite a decent five minute walk, though I actually enjoyed the walk up this long and functional corridor, it was nice to stretch my legs. The walking time to the gate painted was on the floor.

I am not sure this sign was being ironic or not when we did arrive at the end, but I did find it amusing.

We still had a while to wait for our delayed flight, so I took some photos of us waiting patiently. 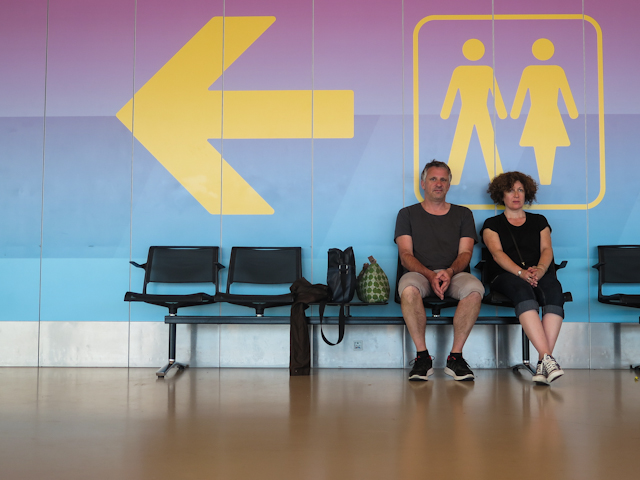 The flight was delayed even further at the gate, though not by much, as there was no plane, bad weather across Europe in the morning had caused the delay. But it was with relief when we did finally get going.

We got home about 23:15, later than expected, tired. But it was a really good holiday, and we both liked Copenhagen enough that we would go back again.