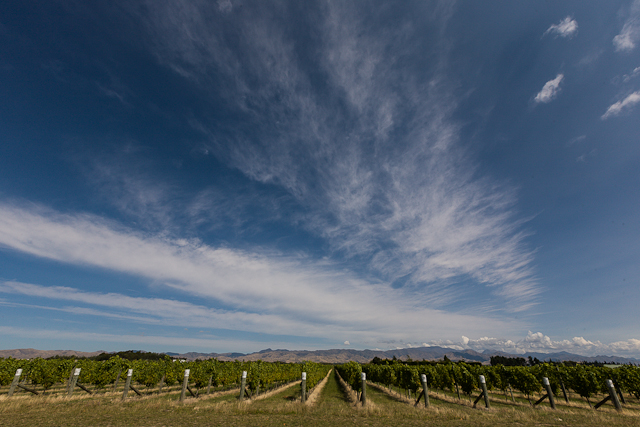 For a holiday we were up pretty damn early on Tuesday, we had to check in for the ferry that was taking us across the Cook Strait to Picton in the Marlborough Sounds at 7:00 AM. We were travelling on the Bluebridge ferry and good fortune rather than good planning saw us on a crossing where my brother in law John, was the captain. Good fortune also saw us on a quiet crossing, apparently the previous day there were five metre swells in the Strait, and vomit bags were well used :

We had a lovely, if cool, morning.

The crossing was delayed slightly as the competing ferry companies ferry broke down again and we had to wait for their passengers and freight to be loaded on our ferry, but after an hours delay we were under way – on the next leg of our wee NZ adventure.

The journey to Picton on a good day is one of NZ’s finest – yet relatively under-subscribed, experiences. The exit from Wellington harbour is lovely and crossing the Cook Strait gives the sharp eyed the opportunity to see all sorts of sea mammals. I was lucky enough to be able to be able to briefly catch up with John and as I asked him about seeing dolphins a school of them passed by the front of the ship, fabulous – though of course I did not have my camera on me at the time! 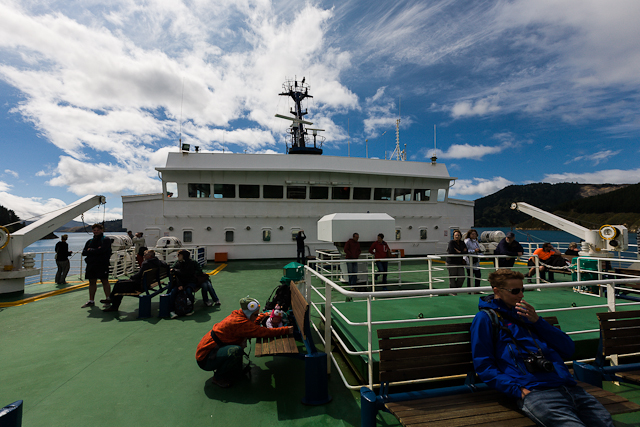 The real highlight of the three or so hour sailing is slowly cruising up through the Marlborough sounds, being on a large sea vessel as it negotiates these narrow channels is pretty damn amazing. It was very cold out on the deck, I was wrapped up more thoroughly than I was when I walked from my home to the station in wintery London and El was wrapped for the full Antarctic :)but it was worth the minor discomfort to experience the ride. 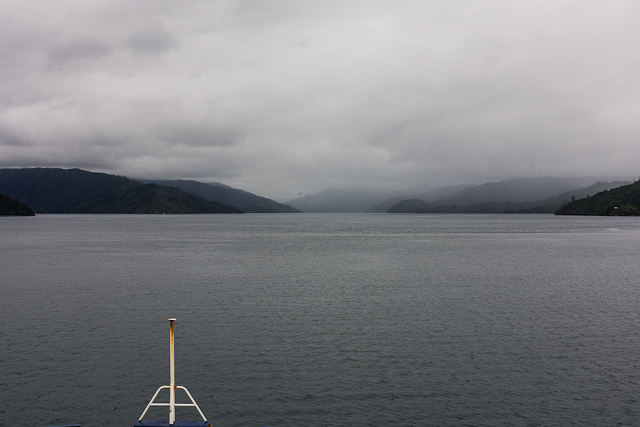 We arrived in Picton an hour late and by the time I had run around picking up the rental car we were well into the early afternoon. My daughter Mel and her friends had come over on an earlier ferry but had left by the time we arrived – though we would see them later on. (Yay). After some time spent in Blenheim we headed out to our hotel for the night, the Marlborough Vintners Hotel.

Maybe if you have been dead for the last twenty or so years then you would not know that the Marlborough district at the top of the south island is one of the premier wine growing regions in the world, so I am assuming that most people have at least heard of Marlborough sauvignon blancs ! Before we left London we had decided that a visit to Marlborough and a tasting or two was an essential part of our trip.

We were a bit late for tastings on the Tuesday but had a very nice meal and some lovely local wine in the hotel. The local rieslings and pinot gris were just stunning! The sunset was better than what I managed to capture on my camera. 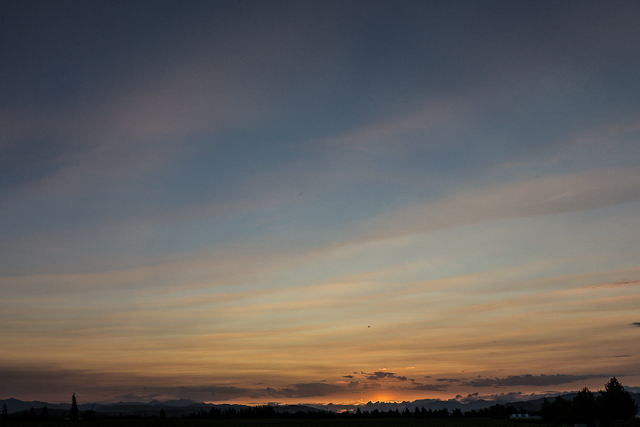 Sadly, the following morning had to check out of the hotel, we had tried to get a second night but it was fully booked. It would have been a perfect place to just laze about for a day and enjoy the main reason for holidaying – relaxing (with awesome wine !). We stayed until kicking out time which happened to coincide with the opening for tasting a number of the major wineries in the area. Our first stop was the obligatory Cloudy Bay, where we shared a couple of tastings. I was driving so this was all very civilised – and it was only 10:00. The wine was fabulous as you would have expected!

Our next stop was Allan Scott, we were looking forward to this as we had a couple of Allan Scott pinot gris in Auckland and they were absolutely lovely. However, after hanging around in the shop for five minutes with no one coming down to see us we left. Pissed off. 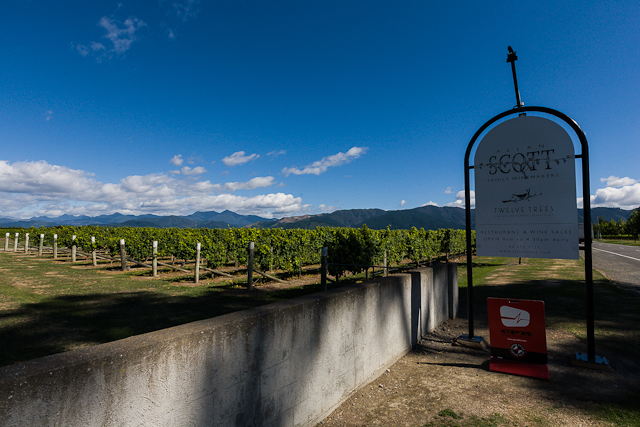 Anyway, it was our good fortune as we decided to check out Hunters Vineyard as we had time and capacity for one more small tasting before hitting the road. Wow ! Hunters was great. The tasting was free and very informative, and the best thing was the wine was fabulous, especially the Riesling and gewurztraminer. We bought a couple of bottles and I was especially pleased to know that the London importer was Laithwaites, which is just down the road from where I live. Well done Hunters ! stupidly I did not take a photo 😦

Today was supposed to be a fairly chilled and relaxed drive over to my sister’s place outside of Nelson (I have two sisters for those who have read this blog for a while and may get confused, one in Auckland and one way the heck out in the country outside of Nelson). We decided to take the scenic route through the Marlborough Sounds Drive – oh so lovely. We stopped for photos on a couple of occasions on the way, first at the bay where my sister used to live in a tiny hamlet called “The Grove”.

And our next stop, the small town of Havelock.

We stopped for coffee and lunch in Havelock, and as mentioned in my last post, the food and the coffee were great. This cafe had the added bonus of homemade fudge – I bought watermelon, passionfruit and Bounty as after dinner treats for my sisters family. Surprisingly they actually tasted as described, the watermelon was simply delightful!

Our next stop was at the aptly named Pelorus Bridge, over the Pelorus River. The Pelorus River was used for the scene in the Hobbit Part 2 where the hobbits were fleeing the orcs in barrels down the river – one of my favourite scenes in any of the Middle Earth movies. The river was not quite as exciting where we were. We took a short walk down to a swing bridge and back again to the car as out short driving day was slowly getting longer and longer. 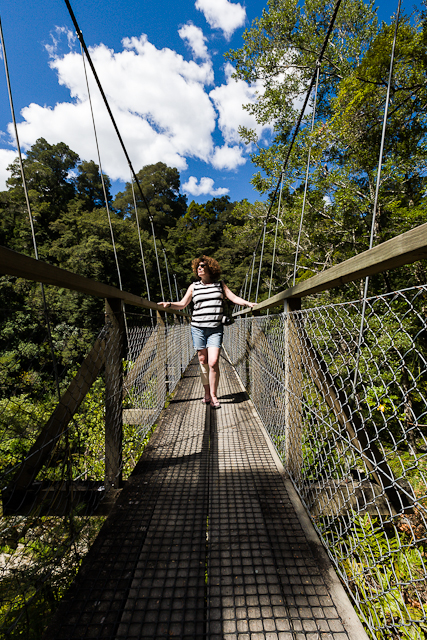 We arrived at my sisters in the late afternoon, my bro-in-law was still working on the ferry so it was just my sister and their two sons who were there. They live way the heck out in the countryside and we had drive down two long unsealed roads to get there, El’s first time on metal roads – as we call them in NZ. I had to resist the teenage urge in me to go sideways round the corners…

It was great to see my sister and the boys, it has been a wee while since I last saw them and the boys had grown immeasurably since. 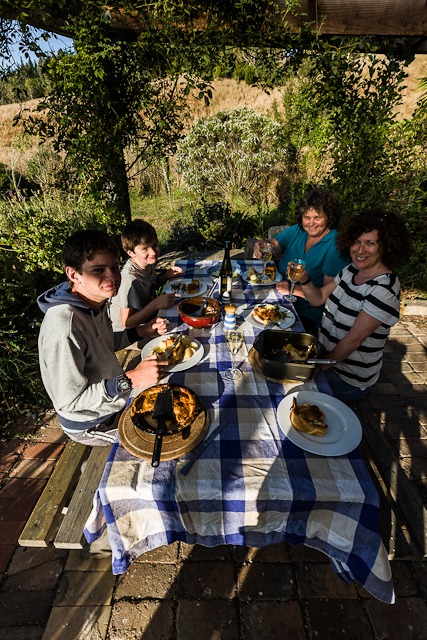 They live in a house on a small farm, and though there are only four of them living there there were EIGHTEEN gumboots ! 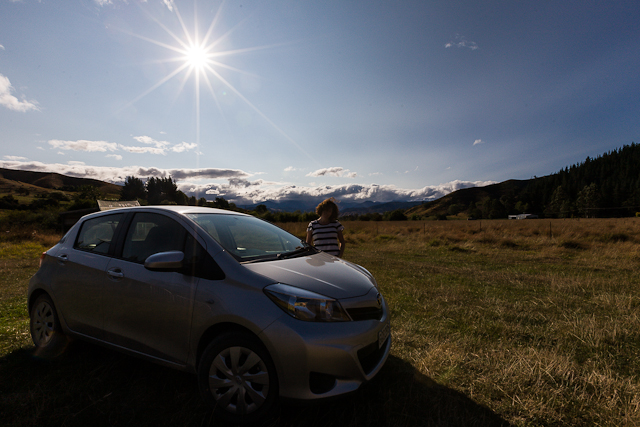 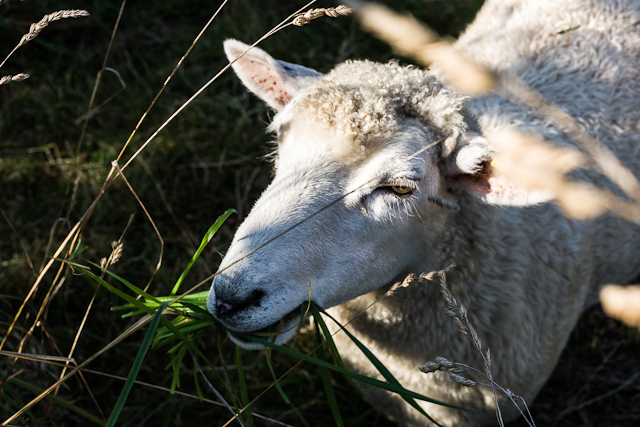 The following morning we set off towards the north-western corner of the south island and Farewell Spit, I have never been there before so was keen to check it out. The spit is twenty something kilometres long and is only accessible by a day tour, we didn’t have the time for that so just had to contend with a visit to the base. We started with a walk over to Wharariki Beach, on the Tasman Sea. It was howling with wind and once we had passed the farm land we were constantly being sand blasted in the gusts. But it was a beautiful and remote spot and on a fine day would be spectacular. There are baby fur seals in the area which was one of the attractions for me, but we did not see any.

We then headed up to Farewell Spit proper and found a a really nice cafe at the entrance to the park, the coffee was great and the food pretty damn fine, a very nice lunch was had – very much to my surprise. After lunch we walked down to the beach and strolled up for a while before turning back and heading back to the nearest point of civilisation – Takaka, where we spent some time on the internet and booked a bed for the night. This is the closest we got to Farewell Spit – though one day I will be back !

We found a very nice little hotel at Pohara Beach, just outside Takaka on Golden Bay. This whole area used to be very erm, rural and a wee bit hippy, especially towns like Takaka. The game has really been lifted and it is a charming country town. It is very tourist driven, something I am normally against, but it works here. I liked it. And I had the best damn coffee in NZ in Takaka. 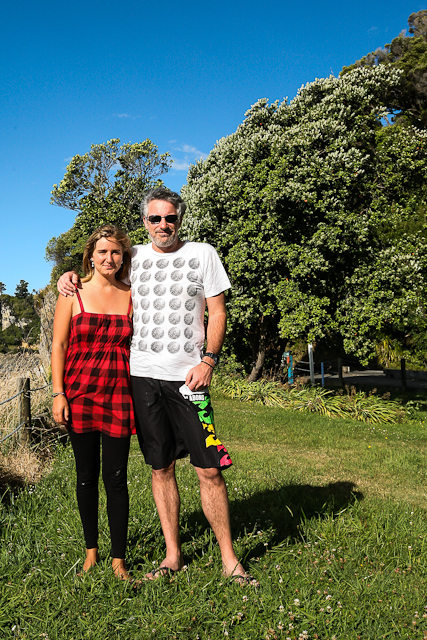 The following day we caught up with Mel again for breakfast coffee before El and I drove back to Nelson city where we had lunch with some old friends of mine before flying back to Auckland, and there pretty much ended the holiday.