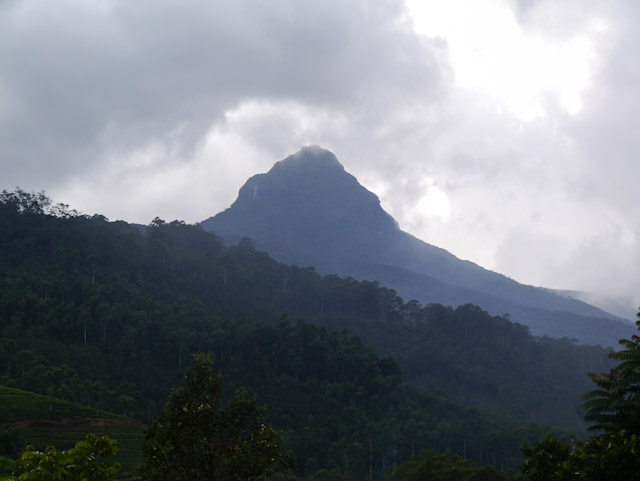 I was not really tired last night so blogged until just after midnight and then read until 1:30 am until I was ready for sleep. It turned out to be a really noisy night with dogs barking till the wee hours and then almost immediately the birds took on the task of ensuring an all night noise fest. I sort of slept but was on the laptop doing emails by 6:00, it was good to catch up on a few rather slightly overdue replies to friends and family.

As is the norm for me I declined breakfast as Benne and I were going to be doing a couple of bus rides to our next destination, the village of Dalhousie at the foot of Adams Peak, four or so hours away.

We took a tuk-tuk back to the Muslim Hotel bakery so Benne could get some food and then we walked over to the bus station, which was not where I thought it was, but a few helpful Kandy locals put us on the right path and we got there just before the bus to Hatton was about to leave. There were not many people on the bus so we managed to get our packs up the front next to the driver and sit a few rows back to keep an eye on them.

As it was a Saturday towards the end of pilgrimage season I fully expect the bus to be very full but surprisingly we had a three seat row to ourselves almost the entire two and half our journey to Hatton. It was quite nice to not be squashed in for a change.

At one of the many stops this guy came on to sell teach yourself English books. This is quite common on the inter-city buses, along with beggars and people selling food and drink. 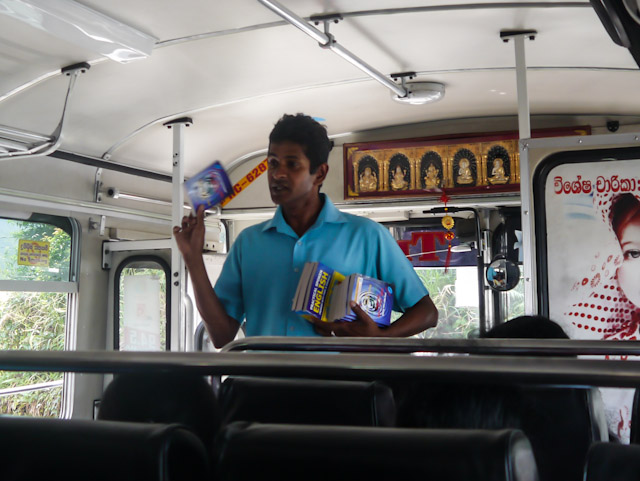 The ride was mostly through some lovely hilly countryside and just after half way we hit tea-plantation country, which is the main product of the hill country area. Some of the plantations are vast with road frontages going on for kilometres. We also passed a large number of lakes as there are many that do the area. It really is quite attractive.

We reached Hatton just before 12:00, as we are planning on catching the train from Hatton to Ella in a few days we walked up to the train station to get tickets, but they did not do reservations from Hatton which hopefully will not be a pain when we leave on Tuesday! The good news was the Dalhousie bus starts at the train station rather than the bus station so again we were able to put our packs up by the driver and get seats. This bus waited until the train from Colombo arrived and was immediately packed, there were three other westerners on the bus and funnily enough we all ended up at the same guest house in Dalhousie.

The bus to Dalhousie was a far more rickety affair than the intercity buses, and even though it is only a 30km journey it did take the full one and half hours to complete it. The road was pretty terrible, narrow very rough and it twisted up and down round the side of a couple of small lakes. The air was cool – by Sri Lankan standards, crisp and would have been fresh apart from the constant stream of diesel fumes coming in through the open windows. It was a beautiful ride though! 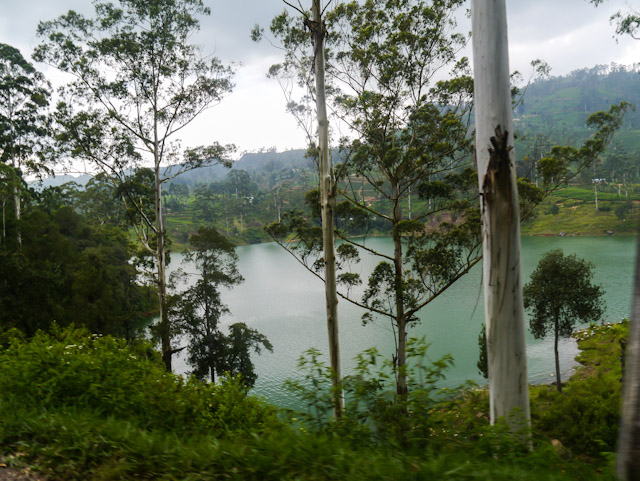 Fortunately the bus stopped right out the front door of our hostel in Dalhousie, and once we checked out the rooms we decided to stay, my room is the cheapest one so far in Sri Lanka and not too bad, I loved the blanket, so appropriate for a fifty year old man! 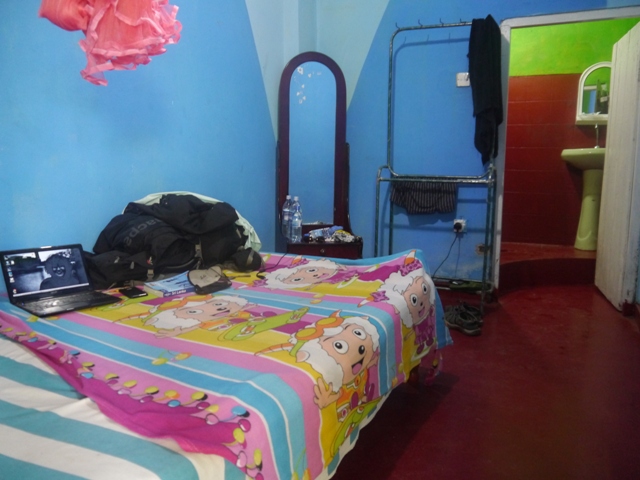 The best news with this room was the power point was in reach of the bed, not at the right end, but at least I did not need to sit on the floor if I wanted to use the laptop while plugged into the power. I had arranged a Skype with El, contingent on there being wifi here and thankfully there was, week but enough to have half of a video conversation with only a few ‘pardons?’ thrown in when the line was down.. It was great seeing and speaking to her again. Even though I have been travelling with Benne for a few days and have met a few other people along the way I have been feeling a bit lonely since I left London. I think this journey will be it for a while. I am enjoying myself though, the country is lovely, the Sri Lankans in the main are friendly and Benne and the other people I have met have all been great, but I am so glad I did not decide to do attempt Europe right now. That and the fact it is snowing in London again! I am looking forward to getting to New Zealand and am hoping the length of time I am on the boat after Sri Lanka is not going to be too long.

After my Skype call Benne and I went up and sat in the roof restaurant area for a while and met some of the other travellers who are here, some have just finished the walk up Adams Peak and some like us, are here to do it. There are more travellers here than I have seen anywhere else in Sri Lanka so far.

Adams Peak (Sri Pada) is the only reason people come to Dalhousie. The Peak is popular amongst travellers and Sri Lankans alike, all Sri Lankan Buddhists aim to complete a pilgrimage to the summit at least once. The Sri Lankan name Sri Pada means Sacred Footprint and it is believed Buddha left a footprint on the peak as he ascended into paradise. For Christians and Muslims it is where Adam first set foot on earth after he was thrown out of the Garden of Eden and came to Earth. Kind of the complete opposite journey!

The pilgrimage seasons runs from December until May and of course weekends are incredibly popular. Once we arrived in Dalhousie and watched the streams of buses and mini-vans arriving in town, and after talking to those who did the walk in the early hours of the morning we decided to delay our walk and do it on Monday rather than tomorrow, Sunday.

The peak is at 2243 metres and the climb from Dalhousie is about 1200, it is popular to start the ascent around 2:00 am and arrive in time for sunrise over the clouds. The ascent is slow and steady through the trees at the base but soon gets steep – culminating in a climb of 5200 steps !!

Benne and I took a walk up to the village itself, which is basically a 500metre long string of stalls selling all sorts of stuff, from food, through warm clothes (it is cold up there apparently) and the obligatory piles of plastic Chinese made crap – balls, blow up monkeys etc – all the essentials for a two and half hour climb… 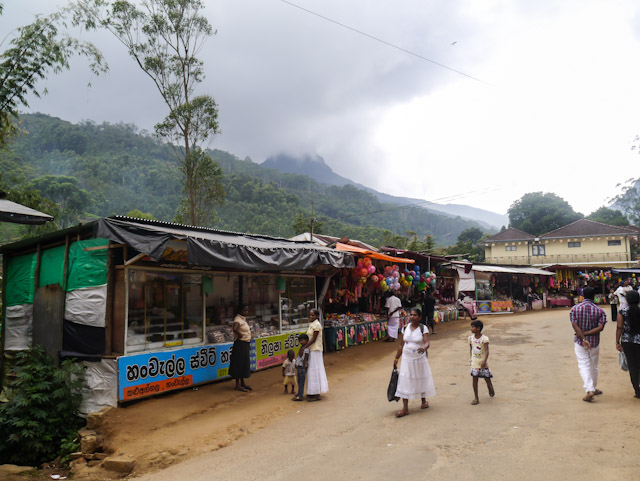 I bought a couple of curried vegetable roti’s and some water for lunch and then walked back down to the guesthouse where I spent most of the afternoon chatting to the people coming and going.Some people are on a tighter time frame than I am and are going to attempt the walk tonight, though Benne and now have a young Bulgarian woman, Galya joining us tomorrow night.

Just before dinner the path on the way to the summit was lit up, it is lit every night during the pilgrimage season, so no need for a torch – one less thing to carry. 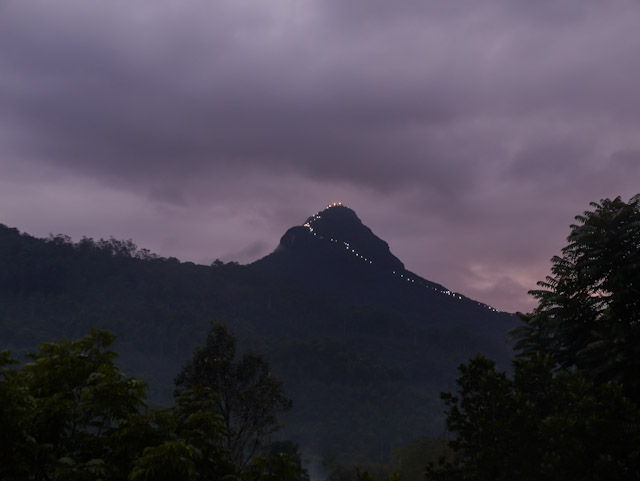 I had rice and curry for dinner, it was pretty good, but as usual – massive ! They are not allowed to serve alcohol here so I bought a bottle of coke and had whisky and cokes with dinner, a lager would have been better !

I sat around chatting for a while after dinner, we had an eclectic group at our table, one each of Canadian, Australian, Belgian, Bulgarian, German and myself. One of the great things with this type of travel is mad mix of nationalities that can end up around a dinner table, love it.

Everyone retired fairly early, some as they were getting up at 2:00 to walk and soon after the rest as everyone was tired and there is not a whole bunch to do.