Much to my disgust I managed to make it up for sunrise, and of course it was less than average. Fortunately at the camp there was a group from National Geographic TV and they obviously had plenty of sway with the staff as there was coffee and tea available at 6:00 AM, yes !

The light was pretty cool pre dawn and the lake still so it was not a waste of time.

When the sun did it rise, it rose very quickly and in a lovely small ball, it was over in seconds.

After the sunrise I took a shower before the rush and went back to bed for a while until breakfast and packing up the 4WD truck at 9:00 to go back to our truck Malakai. We were back on the road for 10:30 and on the way for the five hour drive to Maun.

We stopped for lunch on the way under the most awesome camel tree ever, it was huge and the weaver nests were pretty cool too, pity there is a large green truck under it.

I went for a quick walk to look for photos as I wanted to find another tree, but as everywhere around Africa you cannot stray too far from other people, there was plenty of animal tracks here…

It was then off to Maun Airport for an optional scenic flight over the Okavango Delta. I am not a great flyer, I don’t get scared scared and I don’t DISLIKE flying, but it is well outside my comfort zone and small planes – well I normally would just say no. However, this is the Okavango Delta and it is probable I will never be back again so I took the flight.

Ten of us decided to the flight, it was $120 US each, expensive on my limited budget, but worth it. We had two five seater planes.

We were not told that we would have to go through normal airport security when board our little planes, we had to surrender drink bottles and pocket knives – which luckily, we got back after. We also had to go through the normal security gate, most of us made it through OK. However, our New York friend, Bill was not quite as lucky, he has pants and shirts with many many pockets and kept setting the alarm off – i think he was on is twelfth trip through when he got grumpy with them. Turns out he had a foil wrap from some hydration powder in his pocket, man that machine was sensitive. He became curmudgeon number 1 (there are three of us curmudgeons).

We finally made it out to the aircraft.

The flight was fantastic, I thoroughly enjoyed it, and was only holding on for dear life for a short time 🙂 Photography was hard, the windows were disappointingly grubby and even as low as 500 feet it was hard to shoot the animals. I managed to get a smear of an elephant before I gave up, fitted the wide angle and shot landscapes.

I love the landscape here, it would be fantastic to be able to do the trip in a hot air balloon and shoot straight down on the water systems, the rivers and ponds and paths made by the hippos and elephants. 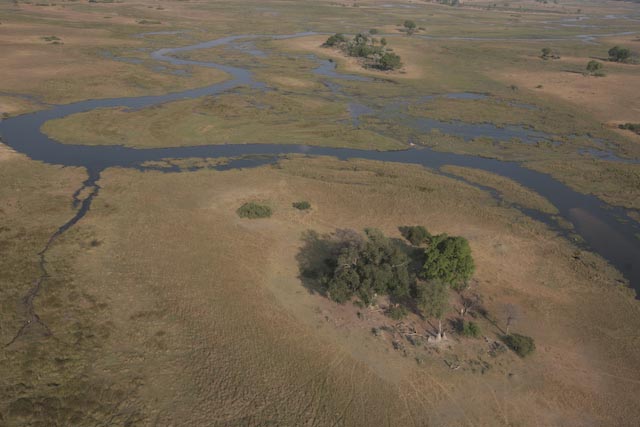 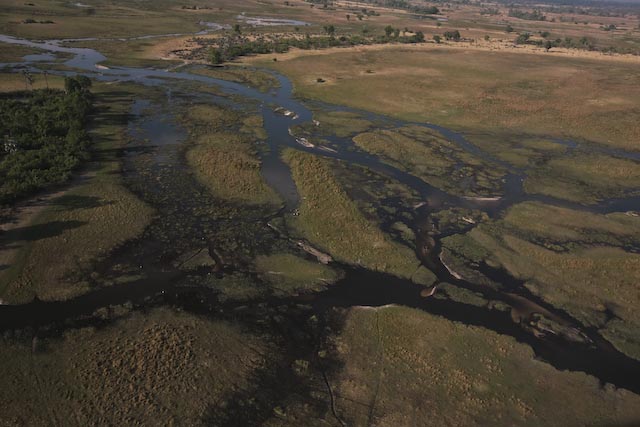 We did see a lot of wildlife, especially elephants and this great herd of buffalo. Though I was surprised at the vast tracts of land that just appear to be empty.

We did see one bush fire from the air, possibly caused by the lightening we saw last night and there are huge areas that have been badly burnt in the past.

The hour long flight disappeared very quickly and far too soon we were flying over the town of Maun and landing back at the airport. It was a great flight and I am so glad i did it. Photos were a bit crap though !

Surprisingly we found those who did not fly in a bar over the road from the airport, so we joined them for a quick beer before heading off to Sedia Camp just out of town, our home for the night. The campsite was dry and arid, but had a great swimming pool and a bar with free wifi ! I manged to get off three blog posts that I had pre-written along with a whole bunch of emails, which was just perfect! It was another late night – into bed at 9:30