I Slept Ok but didn’t really get going till just before nine. It was hot in Malaga, 37 degrees when I got off the bus last night but I did not want to use the air conditioning in the room for too long as it seems to be impacting on my eyes and throat. I gave it a quick burst at four to cool the room down a bit.

I had planned on a big day. There is a lot to see in Malaga and only two buses back to Alcaucin, one in the morning and one in the evening, so I was going to get the 6:30 pm bus and see everything. Well that was the plan when I left the hotel at 9:00! Best laid plans….

My two star hotel, Carlos V, is right smack in the middle of the action, so walking out the front door, I had the cathedral on my left and the Alcazaba on my right. 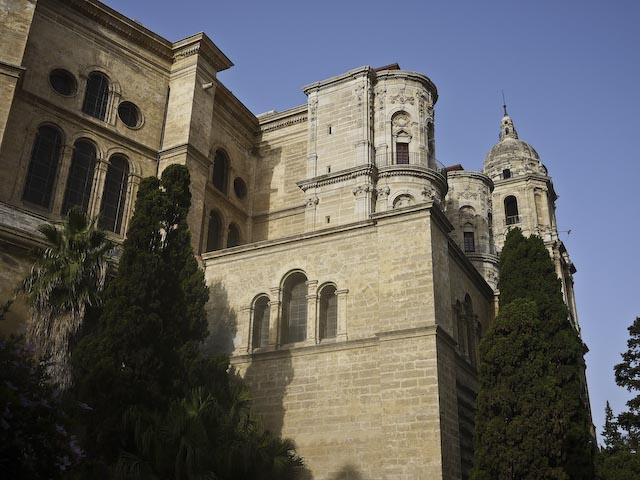 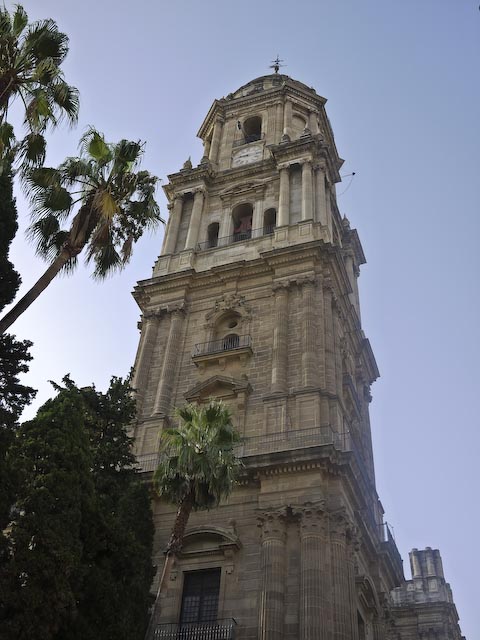 I was looking for somewhere for a decent breakfast but I just all confidence in myself as I hit the street. I knew I was tired, I was really hungry – having not eaten last night and I must have been dehydrated, losing my wallet yesterday did not help either – whatever it was, I could not walk into a cafe. I must have walked for almost an hour before finally getting into a restaurant to eat. I was so hungry – and they didn’t do big breakfasts.

Once I had eaten I did feel a lot better but had resolved to take the early bus at 11:30 to my cousins place in Alcaucin and come back and do Malaga another day.

Guess this place is popular with the English !

It is only two and a bit hours by bus from home so an easy day trip. I returned to the hotel, packed up my stuff and got a cab to the bus station. The ride to Alcaucin took two half hours and there was a change in Velez-Malaga as well, but the driver helped with that thank goodness.

Ian has gone away for the weekend and I am dog-sitting, he left soon after I arrived so after a wee lie down I went up to the le Grande Rancho restaurant for lunch. Ian and I have been here a couple of times so I kind of know how it works, which was just what my confidence needed.

A lot of the restaurants in Spain (or at least in Andalucia) have a menu of the day, which often has a couple of choices of starter main, and desert for a fixed price – usually significantly cheaper than if you chose off the menu. They are a cheap option for the workers to get a good main meal for a reasonable price – remember the Spanish have their main meal at mid-day. Thursdays at le Rancho is Paella day so there was no way I was going to not have that. The gazpacho here is just lovely so I had that for a starter and melon drizzled in honey for desert. Three courses and a drink for 7 Euro – and the drink is any drink so I had a large beer : ) A perfect meal and I was stuffed full as I waddled back down the road and took the dogs for their afternoon before settling in to watch the Olympic BMX racing on TV.

The rest of the day was pretty much spent watching the Olympics, I didn’t get round to watching any more episodes of The Wire – Ian has all five seasons on DVD and I had planned on some Wire marathons.

I had a great and long sleep, apart from having to get up in the middle of the night to find Muttley roaming around outside the door and having to lock him back inside, this time with the windows closed!

I got up at 7:30, walked the dogs and had breakfast myself, it is going to be a hot day I can feel it already ! I spent an hour on a stepper type bit of gym equipment, I am sure it has a name, but I am not up on gym stuff. I want to try and do an hour a day at least on the days I do not get out for a proper run, only five weeks to the event so everything counts now.

Apart from completely reloading my MP3 player with more upbeat music – it is time for a change from yelly punk and broody instrumental rock, I didn’t do a lot else after a shower until I went back to el Rancho for lunch. Today was gazpacho again followed by calamari and fries and beer. With a heaving belly I went home, walked the dogs, watched the BMX semis and finals on TV. I was bummed for Marc Willers who had such an awesome run yesterday and crashed heavily on the first race today, but awesome result for the lovely Sarah Walker getting NZ another silver medal.