Bloody neighbours, what is it with people and playing loud music at 2.00 am – jeez I am getting old, but I always hated Dark side of the moon.

But…… I had the weirdest dream last night, after I finally managed to get to sleep and Dark side of the moon featured in it. When the dreams weirdness woke and all was silent I wasn’t sure if the whole thing had been a dream. Pretty sure it was both though – a weird dream and bloody neighbours.

As with every other morning, the ferry blasted its horn at 5.00 am, normally I doze for an hour or so, but this morning, even though I was incredibly tired I could not get back to sleep – one of those nights.

I booked my accommodation in Phuket this morning, as i have no desire to party or shop or doing anything Phuket like I am staying way the hell out of town at a beach near the airport. I only have two nights there – I arrive by bus late tomorrow and leave by plane early two days later, so am not planning on a lot of sight seeing anyway. Hopefully it will be quieter there than here. I am counting down the days now, damnit.

With no diving planned for the day I didn’t do much until late morning when I decided to do a mega walk and go to the two main view points on the island. It was quite sunny and warm when I left and I walked for about an hour, up and down numerous hills, passed a few photo worthy things. 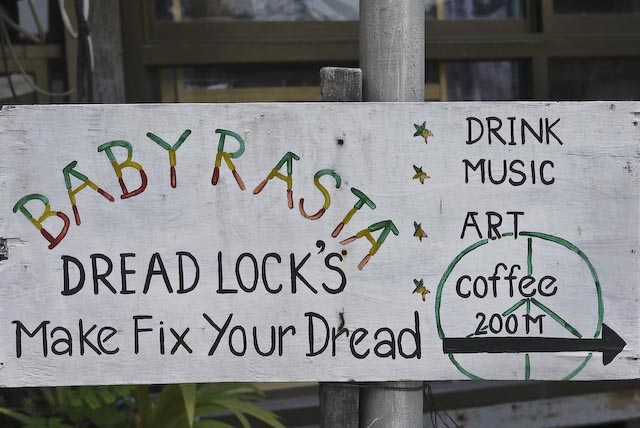 Warning – it gets steep

Tanote Rock viewpoint was my first destination and I stopped for a lovely watermelon shake and a bottle of water. It was still hot and sunny.

The view – look how damn high I walked ! 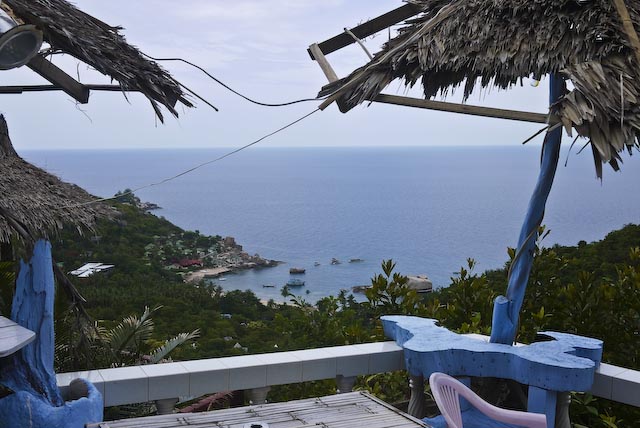 My next objective was twin view viewpoint, which was even higher, I made it up to the reservoir and was walking down the dirt track towards the next climb when a dog appeared from one of the few huts by the road side and started going nuts in the middle of the track. No one came out to calm it down soI decided on caution as the best option, which basically meant scrapping Twin View and walking back the way I came. This didn’t really bother me too much as I was primarily doing this for the exercise as well as the view and to kill some time.

And then the rain came down – I saw it coming but there was nothing I could do about it, I was a good forty minute walk to town, so I just walked on until I got back to the top of the main climb where I took my shirt off and jogged all the way back to town. At times the rain was incredibly hard, it stung my chest as it hit, I got absolutely soaked and somehow managed to lose my shirt when it fell out of my bag. It was my last remaining NZ shirt, my Asics shirt I seem to be wearing in all photos of me ! I did get my second run in which was good, a faster pace than the other day and no pain at anywhere either – alright !

Once back in town, I had a shower, lunch and about five litres of water.

I didn’t really achieve much else in the day and the evening was beyond uneventful.

My nephews band “Heroes for sale” passed through round one of the Smokefree Rock Quest (a music competition for school bands) last night, very pleased as they are pretty cool.