It was a reasonably cool night and I managed a pretty good sleep, there is no air con in the bungalow and i didn’t need the fan either, such a relief after the humidity and heat of Pakse. I was up early in the am, I should have gone for a run as the weather was perfect for it, but it didn’t occur to me until later in the day unfortunately.

My bungalow is the middle one, the Mekong is about three metres in front.

After a breakfast I rented a push bike from the guesthouse next door and went riding. I took a ride into the main village on Don Det, where all the backpackers hang out and it was pretty feral, not my scene at all. The place is OK, a busy wee village, but it is full of what I call the crusty+ backpacker. This is the weed smoking, dreadlocked, tattooed load of young people who are just travelling to get wasted rather than looking around seeing and experiencing different things. I don’t like them and try to avoid them as much as possible, and well – they probably don’t like me either…

So, I am glad I am staying about ten minutes away by bike and with town done I turned round and cycled back the way I came with the intention of going back to town later in the day as they at least had wifi in some of the cafes and I had none at my place.

Along with Don Khong and Don Khon, Don Det is one of the only islands in the Si Phan Don (4000 islands) that are allowed to have tourists staying. Don Khon is connected to Don Det by an old rail bridge. The French were the first westerners to visit the area and after numerous attempts to make it up the Mekong which failed every time at the ferocious water falls that are around Don’s Det and Khon they built a railway to bypass them in the mid 1800s (I think). The railways do not exist anymore, but the raised pathway and the bridge are used by the small amount of local traffic. 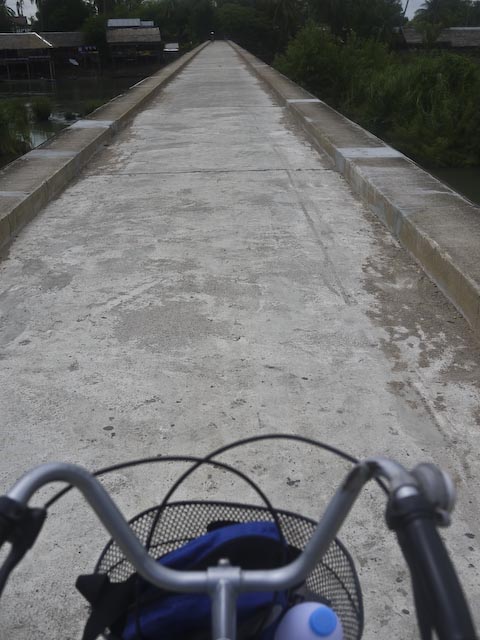 I crossed over the bridge to Don Khon and cycled around for a couple of hours before heading back in the mid day sun to the GH to rest for a while. The islands are quite nice larger than expected and the paddy fields are dry as a bone. I would love to come back when it is wet though.

I found this nice beach on Don Khon and went for a walk around the rocks. You can see from the dirt deposits on the top how high the river gets in the wet. 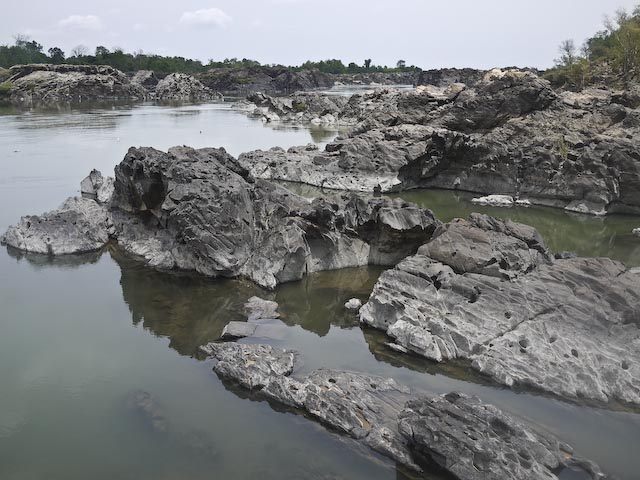 And then to the far south of the island where the French load their boats on to the train.

A rice paddy (in summer)

One of the many temples on Don Khon.

I had tentatively arranged with the Aussies from last night (Matt and Jess) to meet them for a ride to town for lunch and wifi, after hanging round a bit I rode off on my own my own knowing I would see them eventually. I made it up to one of the cafes full of crusties, and after twenty minutes of using their wifi and I still hadn’t been served I left in search of something better. I stopped in a cafe half way back to my place and Matt and Jess arrived a few minutes later. I went to get my USB drive from my wallet as I had copied some movies over for them and then realised my wallet was not in my pocket, or anywhere else for that matter – Shiteburgers ! I knew I had it when i left the guesthouse as I put the USB drive in there so it must have fallen from my pocket on one of the bike tracks. Thankfully Matt and Jess covered my lunch, embarrassingly for me ! and I spent an hour or so frantically riding around to see if I could find it, to no avail. I didn’t have much money in it and my eftpos and one debit card – of which I had a spare, but the biggest pain is going to be getting a new drivers licence. (It is 2 days later I have just got internet access and checked on the NZTA web site- it is going to be a pain !)

I pretty much did nothing else for the rest of the day : ( I had options to get cash, ATM on the mainland and Mike the GH owner was going over first thing, and if the at failed I could get cash on my credit card but at usurious exchange rates – but at least I could pay my bills…

That afternoon David and Debbie a Dutch couple arrived to stay, and a Czech / American couple dropped in for dinner. We had a good night drinking beers and chatting and watching another amazing lightening storm on the horizon, again there was no thunder just spectacular flashes of lightening. Soon after the show finished the wind picked up and was getting very strong. Mike advised us to pack our bags just in case it got bad enough that we should leave the bungalows for the shelter of the restaurant – and then the power went off…

It is nigh Impossible to manually focus on lightning, so sorry for out of focus photos !

The winds died down after half and hour or so, so we all went our separate ways and went to bed.

+ wow, this is the first one of those thingies they have in real books where you add some additional stuff at the end that doesn’t really fit with the flow of the narrative. Pretty much how much of this blog has been though, so I am surprised I waited so long to use it. So, on with the content of the +. Crusties were a name given to a group of hippy like characters where drifting around England in the late eighties, going to festivals etc. They were not quite so peace and love as the hippies were. Plus they didn’t wash clothes that much hence the crusty name.

I had to use + rather than the more traditional * as MS Word doesn’t like you starting a sentence with an asterix.