Grrr, another lousy sleep, feeling quite tired now, will have to medicate if I don’t sleep tonight. It rained quite heavily a couple of times during the night so it was significantly cooler this morning. I was up, packed and checked out by 8.00 am, as it was still raining lightly I took a tuk tuk the couple of kilometres to the new guest house.

It appears Bettina and I are the only people staying here. It is past the end of the peak season in LP and there are very few tourists around. A lot of the accommodation is family run guest houses where the family also live, so they remain open whether guests are there or not. I was very grateful to be offered breakfast when I arrived, an unexpected bonus – that I accepted. As I was finishing Bettina arrived for breakfast so we arranged to rent bicycles together (and get a better deal) do our own thing in the morning and meet up late afternoon and try to get to the temples on the other side of the Mekong.

I needed to do a supermarket trip as I had just about run out of toiletries and the very helpful young guy in the guesthouse – he lived in California for fifteen years, told me where to get the best deal. With that as my first goal i set off on my trusty rented mountain bike.

After the market, where I found everything in one stall! I resumed my tour of the local Vats. With the first stop Ban That Luang. A lot of things were closed today, I am assuming because it is a Sunday – though of course being a Buddhist country Sunday has less traditional relevance than Christian ones. Yes, the stupa is at an angle ! 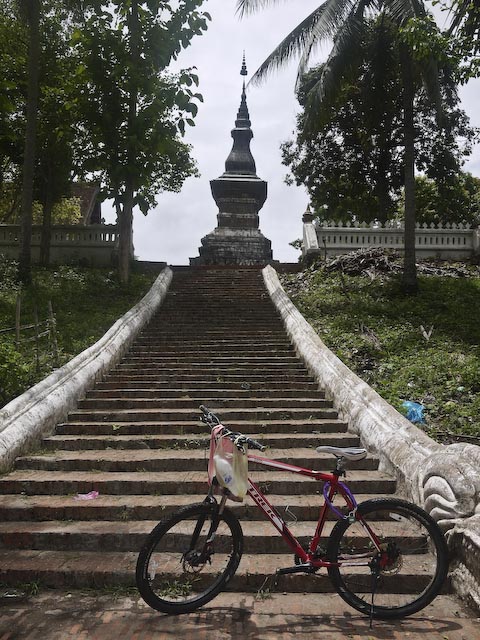 I really liked the slowly fading designs on the doors and shutters.

It was then on to Vat Aham, I paid the 20000 kip to enter but was a bit disappointed! 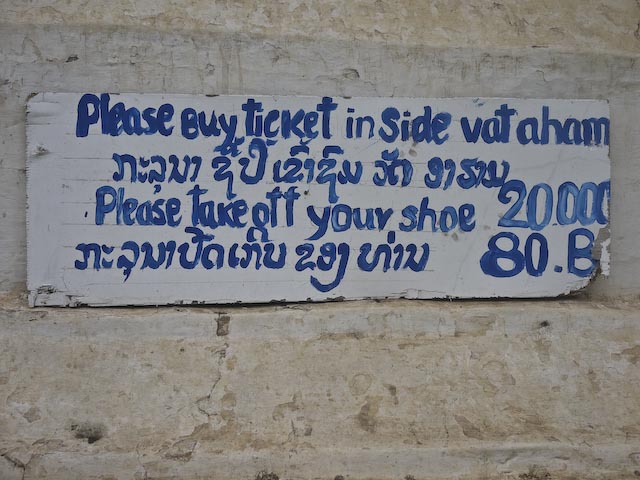 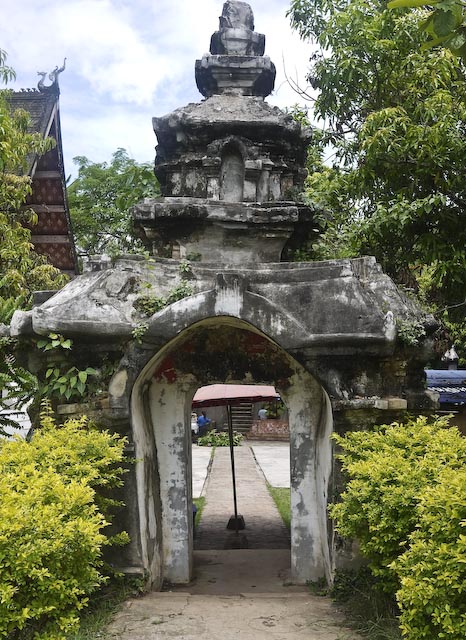 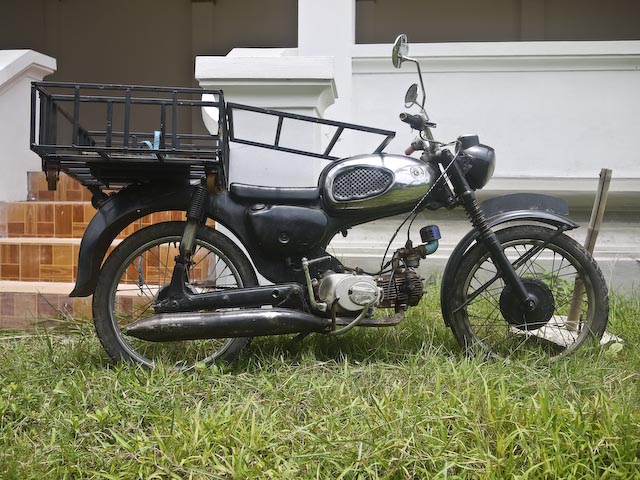 I stopped for an iced coffee at the food stalls at the end of town, though ended up rushing it down as there was some annoying young Irish “hippies”,who for some reason felt they had a right to sit and play a guitar and sing their bloody awful songs while the rest of us suffered, no one seemed to stay longer than necessary.

I then visited Vat Pah Ouak, which has some lovely murals from the 1870’s inside. This is one of the very few of the vats that were not sacked by the Chinese in the late 1880s. I loved the murals. 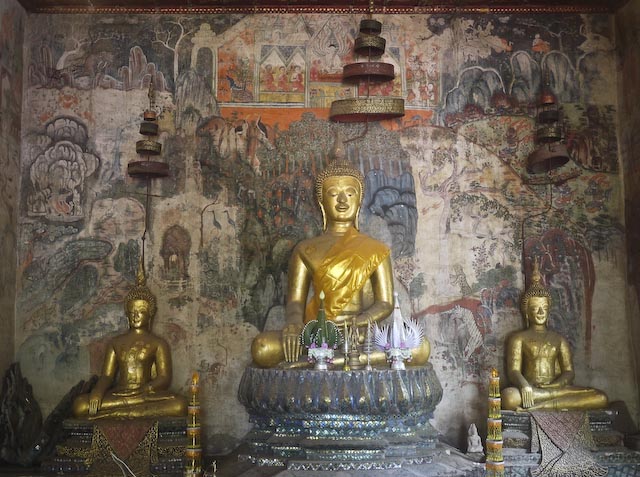 A random building, but I do like the steps. 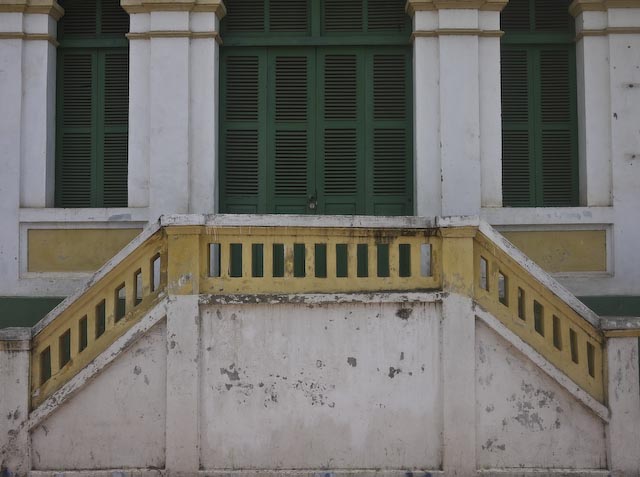 And some random doors. 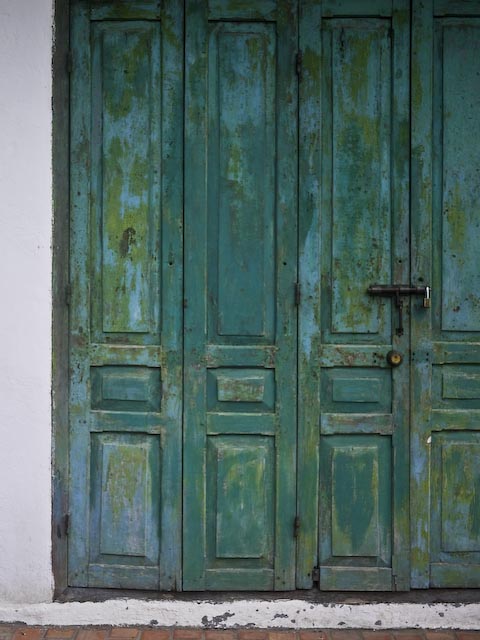 I stopped for an early lunch as it was getting hot and it was time to head back to the GH and get out of the sun for a couple of hours. I’m not sure if it was the lunch or the iced coffee, but a few minutes later – as I was at my final vat for the morning I had to quickly jump on the bike and ride back to the GH to get to the loo. Where i pretty much spent the next four hours.

I ran into Bettina at the GH and she invited me to join her and two American women she had met for dinner at Utopia bar. I said if I was able to walk far from the loo I would join them!

I was feeling OK by 5.00 so returned the bike and walked to Mt Phou Si a hundred metre high hill in the centre of LP so I could visit Vat Chom Si on the top, this time before it closed ! 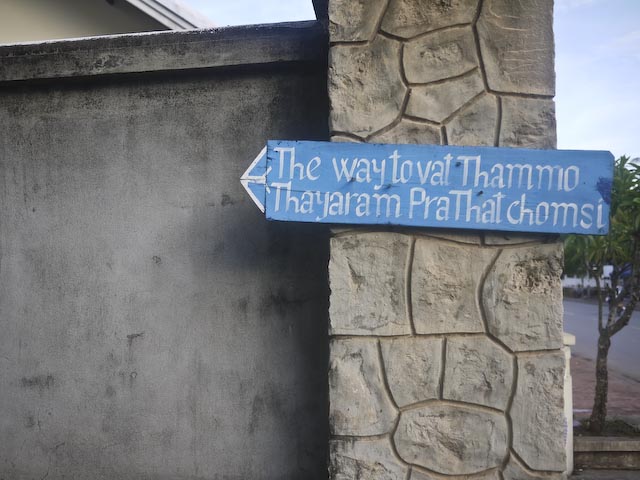 The view from the top overlooking LP.

At the top visitors can buy these small bamboo cages containing two tiny birds which can then be released back into the wild carrying your wish.

I was still having minor stomach cramps but didn’t feel an urgent need to rush to the loo so decided to carry on to Utopia bar and meet up with Bettina, Jane an Kirsten for at least a drink, and then if all was well, dinner. Utopia sits above the Nam Khan river and has all these cushions and things to lounge on at small tables out in the open, it was a really nice spot with reasonably prices for food and drink. I felt pretty good so had three beers and a very nice chicken laap, which is one of the local specialities. We stayed there a few hours, watched the “super” moon rise spectacularily through the scattered cloud and then moved onto a wine bar in town to share a bottle of NZ Cab. Merlot. We are all wine drinkers who have been on the road for a while and missed a decent red. It was very nice !

Being a bit sick in the middle of the day was a shame as I had a good day, and still really like Luang Prabang. I have two more full days here and have booked a flight to Pakse for Wednesday morning.