My last night in Saigon was OK, a wee bit of sleep was had and I woke up feeling OK, so not a bad start to the day. I went down for breakfast quite late by my normal standards at 8.30 – longest lie in for days. I was in no rush this morning. Had a good breakfast with an Aussie couple who were heading back to Sydney – luckily they had not watched the league test last night : )

I took everything out of my pack and gave it a shake to clear the accumulated dust out and then wondered how the hell it was going to go back in again – and why I have three full cans of warm beer to lug around (now only one can of cold beer in the fridge). 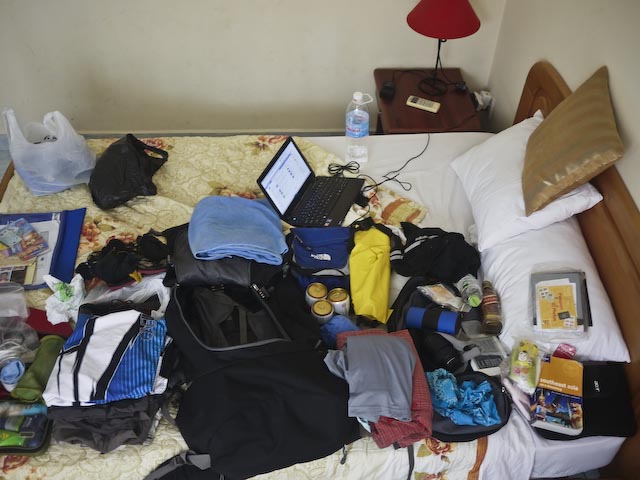 I did some more photo uploading up blog writing and thank God I am almost caught up and then it was time to go down to the street and get my motorbike taxi to the station for the train to Nha Trang. The ride was ‘interesting’, first pillion ride in Saigon traffic, crazy.

I have decided to train this leg and if this works OK I will train to Da Nang. From Da Nang I will take the easy route and fly to Hanoi. The train is slower and more expensive than the bus, but I am expecting it to be safer and probably more secure.

The train left on time, yay for socialism – things are pretty reliable here in Vietnam. I was lucky and got a forward facing seat for the eight hour ride. The other westerners all had rear facing seats which must have been pretty awful. 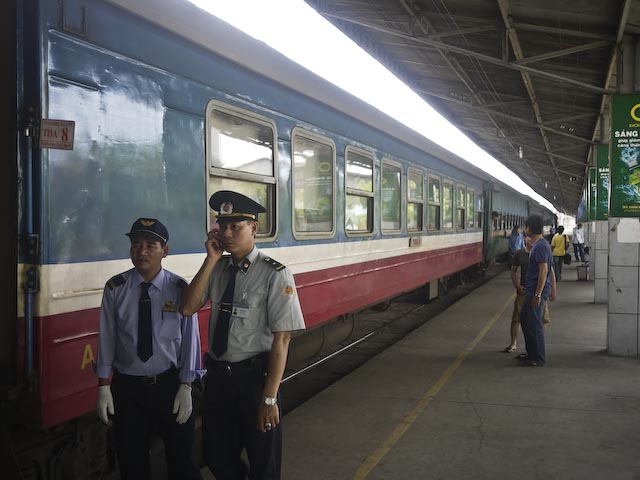 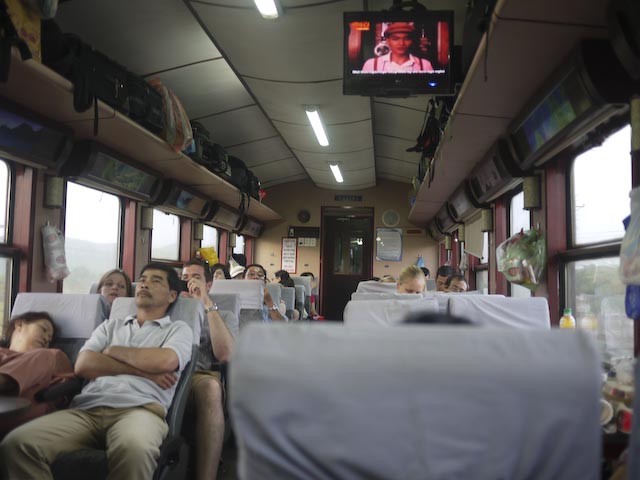 The journey started slowly through the suburbs of Ho Chi Minh City, I was sitting next to a very grumpy man who had the window seat, I don’t think he liked a westerner sitting next to him, so I didn’t lean over him and snap pictures. However, the train runs so close to the walls of the buildings that any photos taken in the city would have been a blur, not that there is anything wronh with that of course. The line starts off (and may continue) as a single line so we frequently pulled into sidings to let other trains through, and vice versa. At one stop we were inundated with hawkers yelling and screaming to sell their wares, mainly fruit and drinks. The train however, sells plenty of food and drink – as i soon found out. We were soon out into the countryside and I grabbed a couple of snaps while my neighbour went for a smoke. The weather had packed in and we had quite a bit of rain for a while. 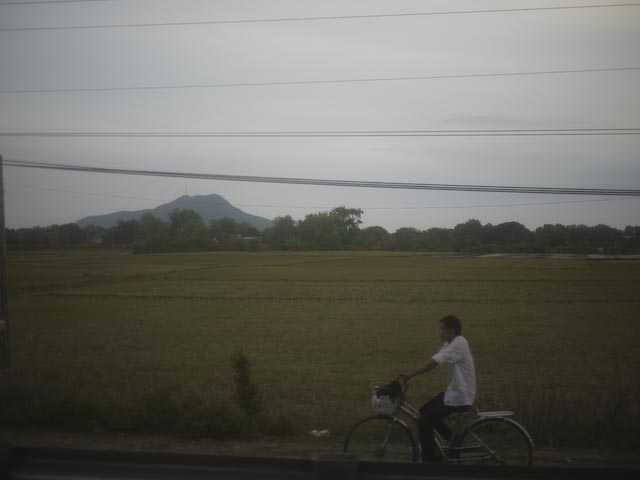 About three hours into the ride, after I had just finished a book on my Kobo e-reader (I cannot recommend an e-reader enough if you like books, these are a must for travellers !) I was just kinda drifting off in my seat, when the guy in front passed me a beer poured into a bottle (in case I don’t like drinking from a can !) and introduced himself as Tam and his friend over the aisle as Duam (I think that is how it was spelt). Duam lives in HMC but has a wife and a son in a village 14 hours away by train. It was his sons first birthday tomorrow so they, plus Duam’s grandmother were heading up to the village for the celebration. Tam had pretty good English and Duam only a little, but they shared a good few beers with me and bought me some noodles and vege for dinner when the dinner trolley came past. Once dinner was over they introduced themselves to some English travellers sitting a few rows opposite and we all moved to the diner carriage so the poms could smoke. Tam bought a case of beer and we all sat down and drank it. Occasionally we were joined by the security guys on the train for a swift glass of beer and then my seat neighbour showed up as well. Apparently he is a ‘big boss’ not sure of what, but the guys all deferred to him – I don’t think it was anything bad/criminal, just he was an important man, elder or some such. He was pretty friendly actually, shook my hand, and later on gave me a glass of his beer.

Tam and I, I am not as drunk as my eyes or the healthy glow in my face suggest ! 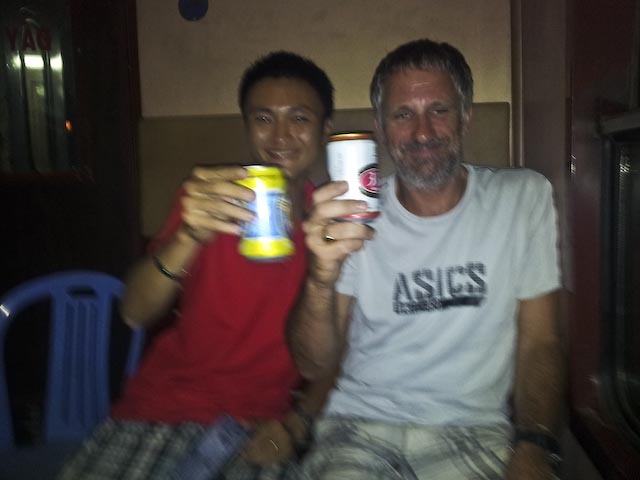 It was a good time, we drank many toasts to train friendships and being able to share a beer with strangers for a few hours and have a good time. And soon enough we arrived in Nha Trang where all us westerners bade farewell to Tam and Duam and left the train.

I am sure that these things can end badly for us naive tourists, being scammed or robbed by “friendly” locals is something that happens all too frequently. I even left my (locked) bag with Duams grandmother while we went to the diner car. Call it foolhardy or risky, but I did spend a couple of hours with these guys first and they felt OK – yeah I know the scammers do to. But, sometimes with risk comes reward and i had a great time, they were nice guys on the way to a birthday.

A good night, and one that will go down as a highlight of my trip.

From the station I took a motorbike taxi (see my comment reply to a previous post 🙂 ) to my hotel. I chose a hotel as they are so cheap here, $14 a night for aircon, TV, hot shower and fridge. I was even upgraded for free tonight to a room with a bath, which I had and would have enjoyed if I was five foot tall !

Today is Record Store day in NZ (possibly everywhere else as well) I got an email from my favourite record shop advising that as a one off, never to be repeated special they were releasing a limited edition vinyl recording of a Toy Love gig from 1979. Toy Love were an old NZ punk (ish) band and a favourite of mine. The release would be 400 vinyl pressings, no CD/DVD or digital release, so miss out on the vinyl and that would be it.

I asked my nephew, Fraser if he would mind trying to get a copy for me. He has a great taste in music for a young person as well as being guardian for all my records, CD’s and turntable while I am away, and does like visiting the store. Anyway he secured me a copy me a copy and for that I am very grateful, as well as very happy !

Here is an old clip of Toy Love from the 1979, Chris Knox the lead singer is an icon in NZ alternative music and sadly had a stroke in 2009, he survived but his ability to make music was ended. It was a sad day for music.