Last day in the Philippines today, shame to have spent it in Cebu, I would much rather have my final taste of the place on one of the dive islands – but it is too risky to rely on getting from anywhere to the airport in time for the flight to Manila and then on to Bangkok. I have mostly enjoyed the Philippines, I have done some great things here and met some good people. The poverty in parts did get me, but that was possibly more because I was on my own and it was more in my face. I will have to get used to it as it is no better than in many other places I am going to visit soon.

I had breakfast with Mike in the hotel and we booked some accommodation in Bangkok,  hoping they get the message in time as we probably wont arrive there until close to 2.00 AM and most places lock up at midnight – well the quieter ones that I am attracted to anyway.

After breakfast I spent some fruitless time on the slow internet in my room trying to do some emails as I have a big backlog to reply too – sorry 🙂 and doing my weekly data backups to usb drives etc.

The hotel was covered in icons, awesome. 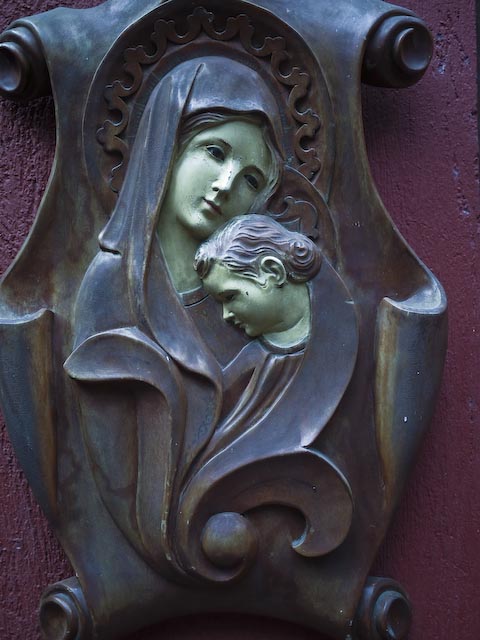 I checked out at 12.00 and spent a couple of hours in the hotel cafe using the internet and planning a loose route for the next month before Mike  I caught a cab to Cebu airport for the first of the days two flights, firstly to Manila and then on to Bangkok in Thailand.  The blind boys of Cebu were playing in the airport, they got all my change.

Airport check in went OK but as we were going through security to the departure lounge and had our bags x-rayed and we were told we were not allowed to take umbrellas on the plane. I said “What ! my umbrella is 6 inches long” I was told it was Cebu airport policy. I got my umbrella out and threw it on the desk and got told off for being grumpy, I said that this was my 10th flight in 2 months and I had never had an issue with my umbrella – I walked off and had a coffee… Very annoying ! My mum bought me that travelling umbrella and it was really useful in those sudden downpours.

Loved the guitar centre in Cebu airport, Auckland – you are missing out by not having one ! 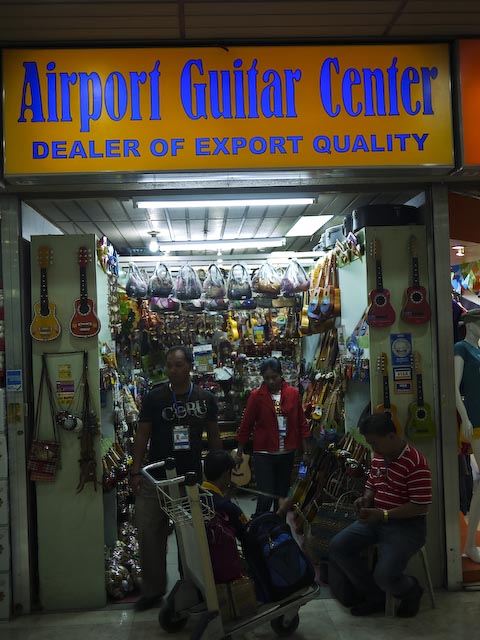 The flight to Manila was pretty smooth and we landed on time, just on sunset.

One of the key features of Cebu Pacific Air is the ‘fun’ time in the middle of the flight, where the crew host a group activity, often this is some people – either the crew or volunteers, singing a song until someone guesses the title. It was amusing, and on this flight we had a woman who could actually sing !

We had a three hour wait at Manila airport so occupied a corner couch in an Italian cafe and used their, mostly hopeless but free, wifi. Just before the flight to Bangkok I managed to knock an almost full glass of red wine over my shorts, ran round in a panic trying to find a new pair in the airport shops, but nothing really fitted or appealed – I need a new pair of boardies as mine now have a hole in them. By the time I had found there was nothing to buy the wine had dried and wasn’t too obvious so I just rolled with it. The flight was delayed anyway…

Not a bad flight, a bit bumpy and a bit squashed for three or so hours. I couldn’t sleep even though it was 1:30 am when we arrived in Bangkok. Immigration was all straightforward, though long queues but our bags were there so we grabbed a cab and headed for our hostel – HI Sukhumvit, and hoped they stayed up to let us in !

Sukhumvit is a road in Bangkok, that has an area named after it, our hostel is on one of the many small side streets, and our cabbie really had no idea… The main drag was very busy, traffic jam at 2.00 am ! you first hit the street at the western end and for me it was an OMG moment – and not in a good way. We passed girly bars, street bars and scores of older men with young Thai girls at the street bars. It was all my Bangkok nightmares come true, and I was really thinking if this is what Bangkok is like I am gone tomorrow! Fortunately, that is only one end of the street and a few kms down the road (after a miss turn or two) we found our nice YHA hostel in a very quiet residential street, and they let us in at 2.30 am as well….

We had a three person room booked as there was no two’s left but it is still cost effective has aircon and the wifi works ! it also proved to be very quiet too !

Time to step away from post rock today, had a wee bit of a noisefest session late this afternoon when Mike went out for some food as I was meeting an old friend for dinner. I am writing this post tomorrow, is that confusing ?

God bows to math are an Auckland noise rock band (named after a song from the brilliant old school punk/alt rock American band The Minutemen). They release their first album at the end of 2011 and it is pretty damn good – if you like noisy guitars and yelling – which I do…  Slow decline