I didn’t get a huge amount of sleep, paid a lot of money for this bed and was only in it for four hours!  I got up at nine and packed my stuff up and headed downstairs for breakfast and got a call from Trefor, he is back in KL and I can stay the night on his couch ! Awesome. I checked out of the hostel and left my bag in the locker and headed back out on my own to see what Thaipusam (TP) looks like during the day.  I had to only walk meters before finding the first bus heading to Batu Caves, as I was one of the last on board we pretty much went straight to the highway and were off. The traffic was a lot worse today and there were cars angle and double parked a good kilometre up the motorway from Batu…. Crazy ! 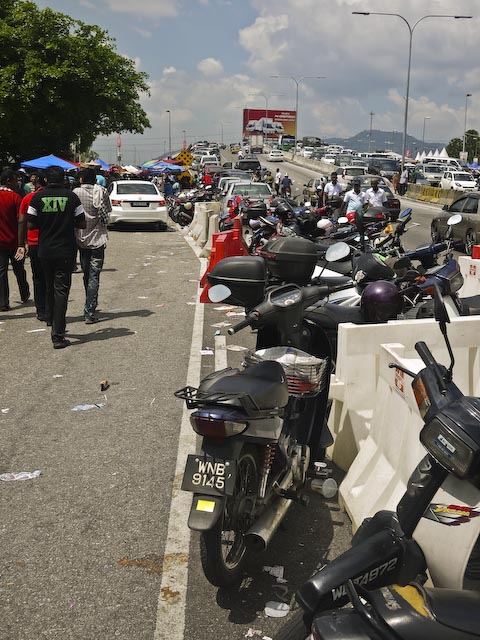 When I arrived there seemed to be a lot less people than last night, still tens (or hundreds) of thousands around the site, but  the main entrance to the caves  was relatively calm today, it was only thinly packed ! There were a lot more stalls selling souvenirs and the usual cheap Chinese crap that seems to find its way into every market I have been to. There were also a few stalls selling the dreaded horns that were a real feature last night, bit seemed quieter today.

I walked back up the motorway ramp where we saw the small procession of guys with the hooked ropes in their backs. It was pretty deserted but I could see there was some action at the end of the ramp where we spent most of the time last night watching the blessings and the garlands being made and the guy being pierced. I snapped a couple of shots from the bridge.

The river here is where people were bathing last night, the rubbish was just everywhere.

You will see more of this guy later. 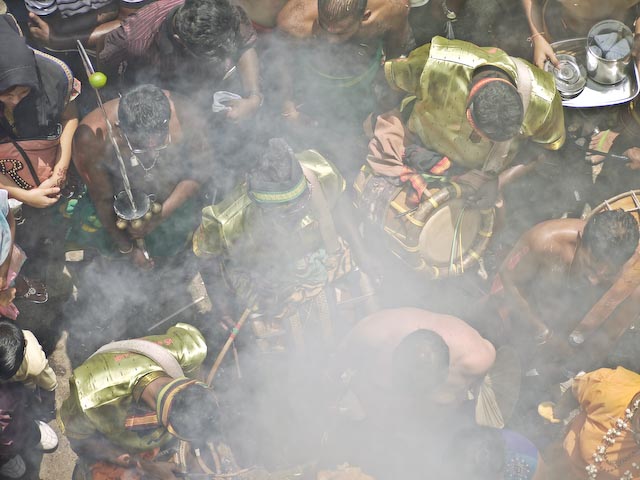 Fortunately there were still a number of devotees getting ready to do the walk and I got a number of shots of the hooks being pushed into the skin. One thing you will notice, and it was not obvious last night was there is no blood. Writing this the next day I do not recall seeing any blood at all during the festival. I will let these pictures speak for themselves… 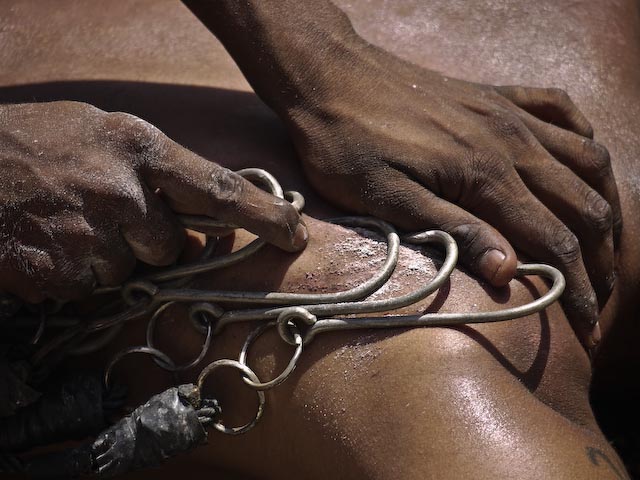 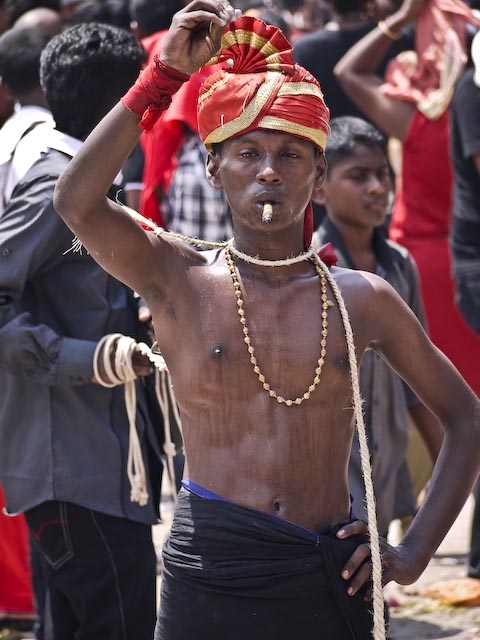 I spent a bit of time just watching and walking around, as it was extremely hot and sunny I finally wandered off with the intent of getting to the caves and doing the “steps”.

In one of the shots above you will see a guy standing there with a large curved sword, I didn’t see any weapons at all last night and was wondering what it was for, I soon found out… 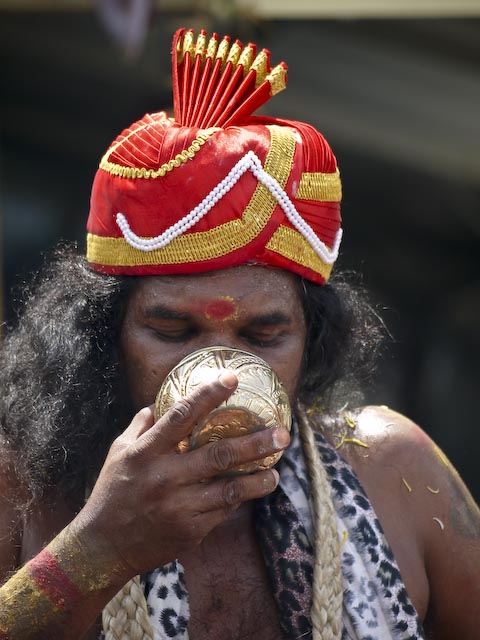 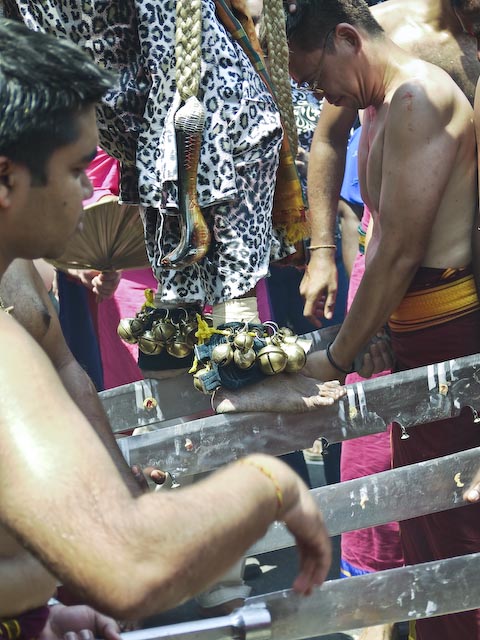 The devotees  come to the steps from a number of preparation sites but all end up walking along the final section of road to enter through the main entrance to the caves, I am guessing they probably walk around a kilometre to the steps. As I said above the day was very hot and the closer we got to the steps the more breaks the devotees we taking. As they walked people mainly women stopped and gave the pierced guys drinks of milk from the cups they were carrying as part of their worship. The pierced guys then ‘blessed’ them – or something anyway ! 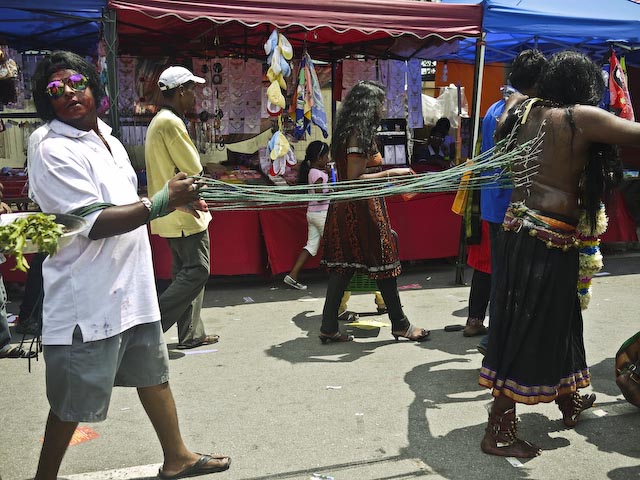 This guy has three spears through his cheeks, everyone of those chains ends in a small hook in his skin. He is also carrying a large feathered kavadi (offering) that must weigh many kilos. 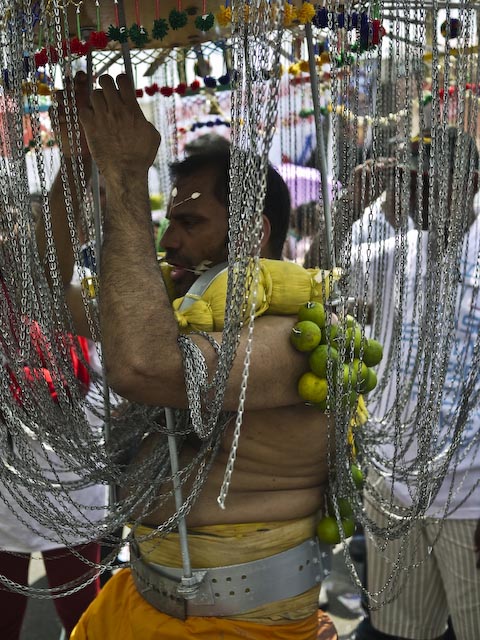 At the bottom of the steps, you can just see it in one of the photos below, there s is an entrance way the devotees must pass through, for those with the tall kavidas, they have to bend their tortured bodies down to pass underneath. In the middle of the entrance they stop to dance with their supporters, watching this was an absolute highight of my day, but we soon got moverd on by the police.

The devotees then climb the 272 steps the temple inside the cave. It was incredibly hot by the time I got to the walk through the crowds, and the suffering the devotees must be going through would be incredible. 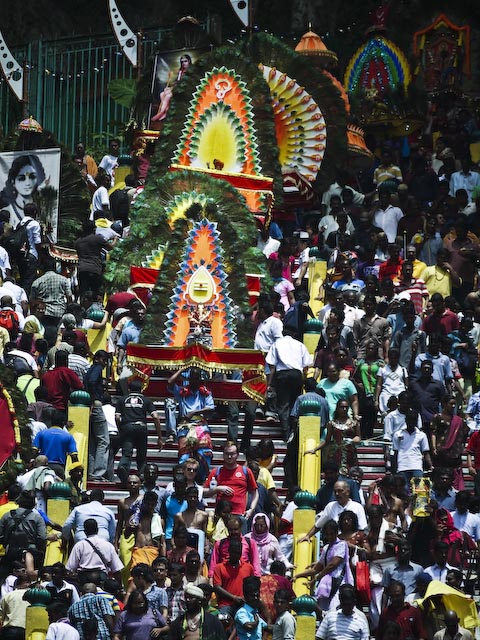 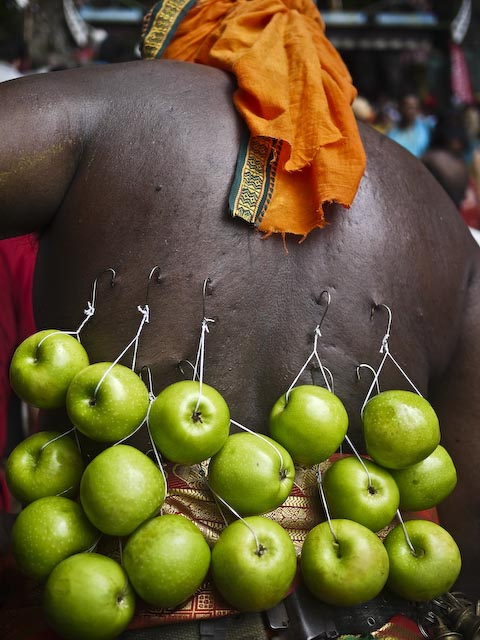 The skewer through the cheeks or tongue is to prevent the devotee from sharing his pain with others.

Remember this guy from one of the early photos !

Once their offering has been presented the piercings come out. 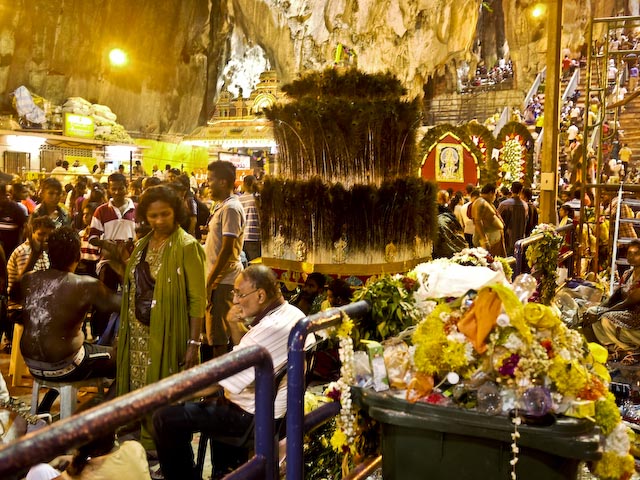 I wandered around the cave for a little bit and then literally dripping with sweat I went back down the stairs, skulled a warm bottle of water and caught a bus back to the hostel. And there ended my TP experience.

The day was interesting certainly, so much easier to take photos than last night but it did ‘feel’ the same for a witness, I am sure the devotees and their friends and family do not share my simplistic point of view though !  The heat got to me definitely, the level of commercialism was frustrating, not that the festival was in anyway commercial, but the number of stalls and people trying to sell me cell phone contracts and pirated DVD’s was just not what I was there for.

Don’t get me wrong, it was still amazing ! and I am extremely glad I came bacthe day, was gok t KL for it. The night experience definately rocked my boat.

I grabbed a shower before heading off to the Petronas towers to meet up with Trefor. 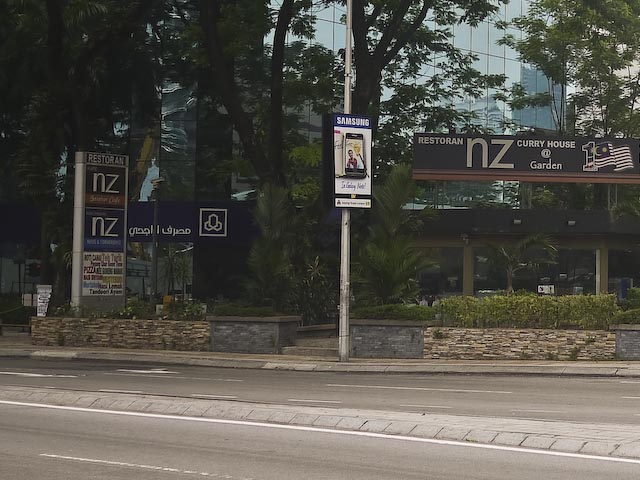 We went and dumped my gear in his 24th floor apartment, (the lift shows 23a as 4 is unlucky !) and soon headed for a wee lager at some of the local bars. Trefor had two old work colleagues  from his London days in the 90’s also turn up in KL as well so the four of us spent a few hours sucking down suds before heading back for some (for me, much needed) sleep.

An interesting final day in KL !