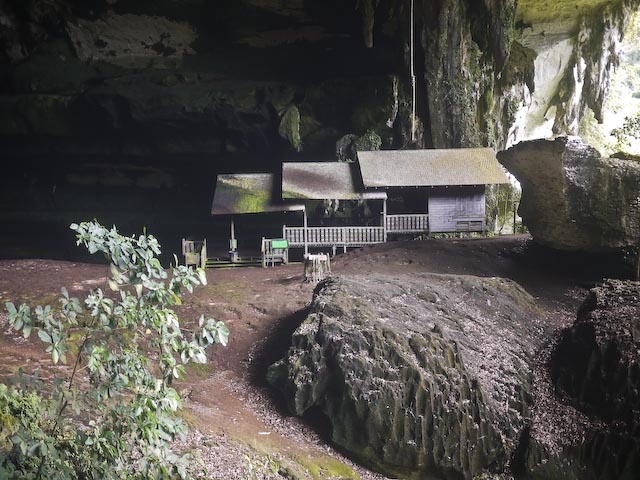 Mrs Lee, who runs the hostel, organised a car for myself and the English guy and girl (Dave and Lizzie) to go to Niah Caves, which are about 110km from Miri. It is possible to get a variety of public transport to the caves and a number of people do this, but for me this was the easiest option not much more expensive than the more complicated bus option, plus the driver waited for us so we had a guaranteed lift back to town.

The Niah Caves are in a small national park and in 1958 Tom Harrison discovered a human skull that has been dated back to 40,000 years ago, along with igns that the cave system was used for human habitation up until quite recently. The human remains were known as “Borneo Man” and are the oldest human remains found in SE Asia.

The caves are primarily populated by thousands of bats and a small bird, the switflet. The swiflet make their nests from their own saliva and these nests are prized in China as the source for birds nest soup.  For many years the local iban people have collected the nests and bat guano (for fertiliser) for sale. Throughout the cave system there are massive ironwood and bamboo poles used by the collectors, who will climb high up the caves to knock the nests down to the ground were they are collected.

From the park office you take a boat across the river and then take a two kilometre walk through the bush on a very slippery raised boardwalk to the first of the caves, the Trader Cave.

The Trader cave is more of a large overhang that for was used as a market – mainly the trading and selling of birds nests and guano.  The cave was pretty cool…

remains of some of the traders stalls.

This shows the scale of the cave

From the Traders Cave there is a short walk to the Great Cave, the entrance is 60m high and 250m wide…. Impressive ! to the side of the great cave is the original excavation site.

There was some great stalegtites ! I am not sure what this buiding is for, no signs! possibly used by archeologists ? place for visitors to rest without being poo’ed on from above.

The cave  is huge, a boardwalk allows you to wander through the system and I took a number of photos. I was not supposed to take the tripod in but I did and snapped a few shots, most of which were rubbish ! need to practise taking photos in the dark with this camera ! 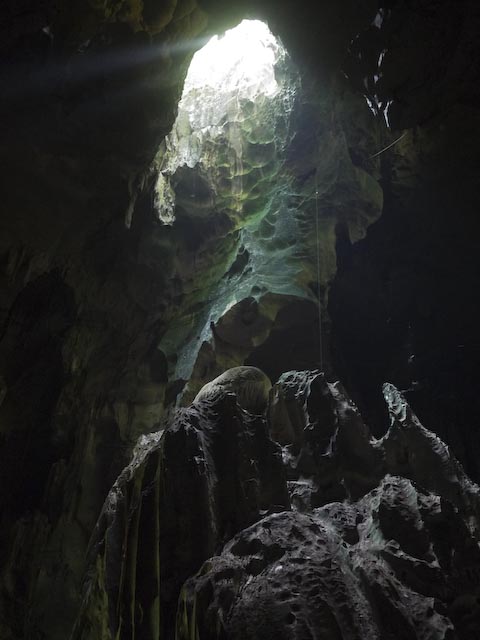 In the middle of the cave we found some birds nest collectors, they were slightly too far away to get a decent pic, so this is it.

After the Great cave there is a short walk to the painted cave. The painted cave contains a fenced off wall where some old cave paintings were discovered.  There is no information on when these were found, or how old they are.  It is fairly typical of Borneo to not have a lot of info about things, the museums have been the same, there will be a long of masks on a wall, with a sign saying Iban masks, but no info about what they all mean !) 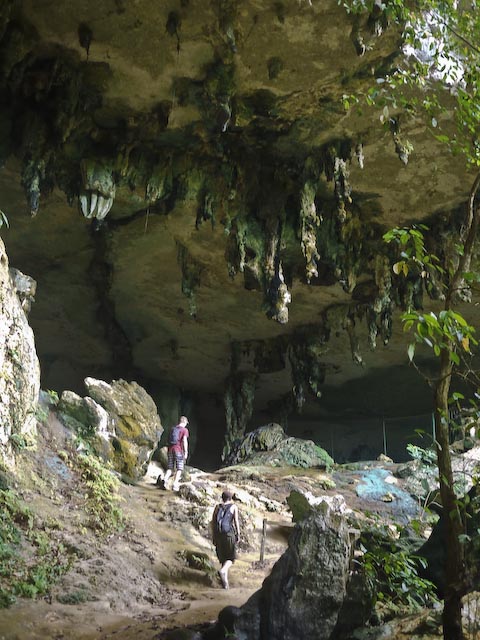 From the painted cave you walk back they way you came to the park entrance. We met a couple of people in the park, but it was largely deserted which was awesome !  It meant we could take our time walking through, stopping to take photos without blocking the paths. I can see why tripods are not allowed, on a busy day they would be one heck of a hazard.

I really enjoyed the caves, though very humid (I was dripping as usual ) and a nice pong of  bat shit ! We had a lunch of rice, okra and fern roots at the park and then went back to the hostel for expensive beers.

There are more photos on Flickr as it is too time consuming to add lots to WordPress !

A good day, probably the best one so far !