I spent the evening last night in my hotel room as it was all so quiet in Sibu when I was wandering around between 5:30 and 7:00. I watched another movie, blogged and turned the lights off about 10.30. At midnight the local karaoke bar really kicked it up a notch and music was blasting till 1 am, and no I did not go down and join in 🙂

In Sibu I finally started taking health precautions, shower in jandals (thoughtfully provided by the hotel), water from bottles, slept in the sleeping bag liner and insect repellent on exposed skin when I went for my evening walk. I am really going to have to make these things habits and do them without thinking. I have also started a habit of storing my laptop and money belt in the hotel safe and bolting my door at night and have split my cash into different piles and storing them in various bags and pockets.

I had breakfast in the hotel, fried eggs on toast – mmmmm, and then re-packed and made my way back to the docks for the fast boat to Kapit.

The boat is just like a water-borne aircraft, a sealed torpedo. I took a business class seat which gave me a wee bit more room for an extra NZ dollar, over a three hour ride it was worth it. The ferry was full which meant I had to stay in my seat rather than bounce from side to side as the views changed. The ferry also had a list to port which was a real hassle as I was on the starboard side so taking photos was a bit harder to do, and I had to shoot through a rather grubby window as well. The drizzle had stopped by the time we left Sibu and it remained mostly dry throughout the voyage. As the bags were on the roof I had used the pack rain cover I got for my birthday, such useful gifts.

The voyage was uneventful though I did see a small crocodile sitting on a log !!! As the ferries move at a supposed 55km hr I didn’t get a chance to photograph it, damnit. Photos all taken out a window so pretty crap.

Chinese cemetery, Christians escaping persecution in Foochow were the first to colonise the interior in the early 1900s.

Long house. The are are a lot of long houses up the river, most have been upgraded into modern concrete buildings, most with satellite dishes on the outside. Some are huge !

The unloading of the boat. I had to get my pack of the roof and carry it along the side of the boat, while negotiating people coming the other way. I had visions of me ending up on my back in the river ! 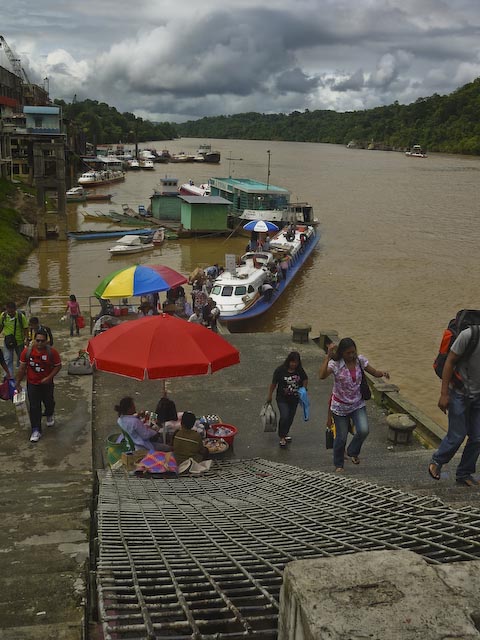 I arrived in Kapit at lunch time so found myself a hotel, New Rejang Hotel (the roughest yet) and went in search of some snacks and to see if I could find any other tourists in town. I also got the name of a guide from the hotel reception. All I managed to find is some food….

I rang Lion (Leon) the guide and he is busy today, there were no other obvious tourists on the streets or in the cafes and Kapit is a small town. I think I have blundered badly by coming here on a weekend in the rainy season 😦 there is just nothing happening. The regional office is closed at weekend and apparently you need a permit to go up river – though also apparently no one checks. There were no guides at the jetty so I think I am going to be disappointed today.

I had a good walk around the town centre, visited the market and temple, the old White Rajah era Fort Sylvia was closed (supposed to be open) and had run out of things to do by 2.30. Hotel room, Tsing Tao beer, blogging and dozing was it for a few hours. 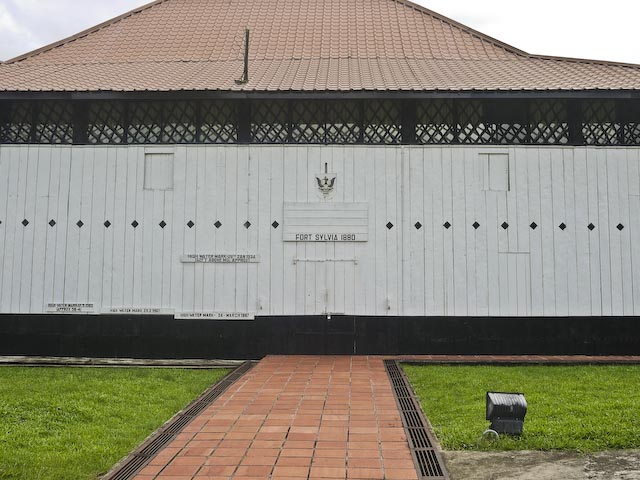 Cock fighting is a very popular form of entertainment in Borneo, I haven’t seen or heard it though, but these are fighting cocks for sale. 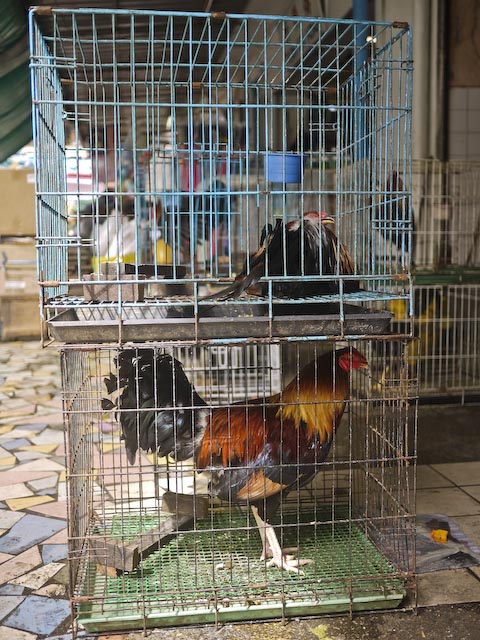 I headed out for some food and the hope of finding some entertainment at 6:00, however, the town is almost deserted now with most of the shops and a lot of the cafes closed or closing. I was walking past the water front and was hailed by a local man, I went over to say hello and it turned out he is Mr Joshua, the Lonely Planet recommended guide. I talked to him about a longhouse visit and how much money I had. He said unless the last boat brings someone in I am the only real tourist in town ! I am going to meet him for coffee tomorrow morning and he will see what he can do for me, but I cannot afford a trip on my own.

A wee snack – please note I am using the can and not the (very tempting) ice filled glass ! 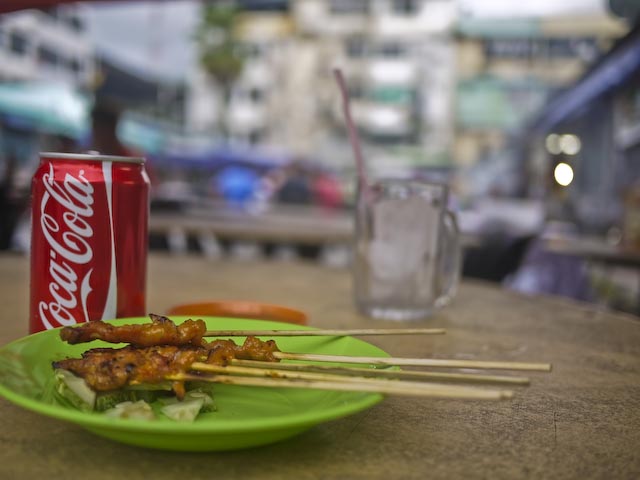 [Edit] – Obviously in honour of my visit to Sarawak, for the second day running I have seen a movie with a NZ actor, on the ferry this morning was Cliff Curtis’s latest movie Columbiana.

2 thoughts on “News just in, I am the only tourist in town!”