A few years ago a day off work for a day trip to ride the mountain bike trails in Rotorua was a fairly regular occurrence. Since I have been running more and riding less, trips to Rotorua have become very rare indeed.

Now that most of the pre-trip tasks have been completed and I have a bit more time I managed to convince my long term riding buddy, Miles, to take last Friday off work to go riding.

I stayed the night at his place and we were up early, got the single speeds loaded on the car and were on the road before 8.00 AM. We took a petrol and coffee stop at the BP service centre just past Papakura and my damn car failed to start, shit balls ! A $195 membership renewal later and the AA turned up and confirmed the issue was  the starter motor. The AA guy gave it a good smack with a hammer and we were off, under the advisement that the starter had 2 or 3 more smacks in it before it died. With that in mind we decided to continue on the way to Rotovegas and take the risk, the weather was awesome and it would be my last chance to ride there for a while so what the heck.

The rest of the drive down was uneventful and we were only half an hour later than expected to the trails. As neither of us had ridden there for a while we decided to stick to a route that was loosely familiar to me and, as we were on single speeds and I was not feeling on top of my fitness, we stuck to the middle and inner trails.

We rode the road up to Hill Rd with the aim of starting with the Rollercoaster track, but the trail head had been forested and was too hard to find so we shot (I walked) up the road a bit further and started the ride on Chestnut Link.

After not riding for a while I was extremely cautious on the trails. Riding way too slowly while sussing out my balance my front wheel hit a root and I did a slow rotate over the handlebars and on to my face on the ground, awesome, 50 metres into a ride and I am down. ! Fortunately the only thing hurt was my pride, though I never really recovered my confidence and did not rail the trails as fast as I have in the past. 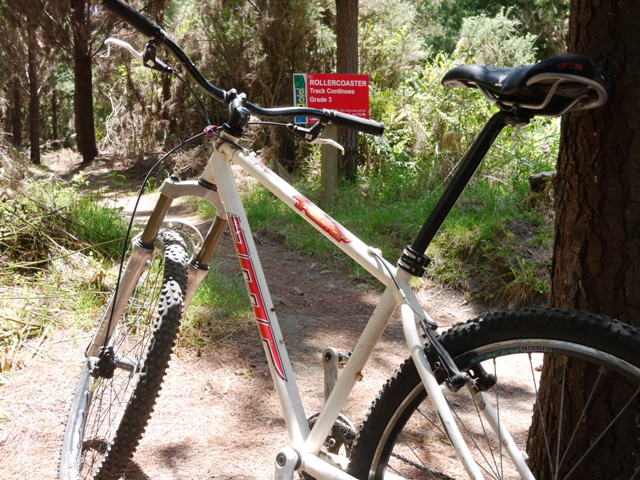 The morning was quite warm and humid with a bit of pollen in the air, unusually I struggled with breath on a couple of occasions and had to have a mid trail rest on the Chop Suey track.  We rode the ‘Chinese menu” trails then down the awesome Dragons Tail track, followed by some forestry  road up to Challenge Track.

(mmmm, should have sucked in that gut a wee bit harder)

Every time I ride the Rotorua trails and get to the Dipper track I have a debate in my head as to whether this is the best bike park trail in the forest, or maybe the country. For a reasonably flat trail it is just so much fun, beautiful fast track with some awesome high-speed, bermed corners and a couple of small humps to get a bit of air off.

It is always a great ride at Rotorua !

The best news was the car started first time to get us home, and then again the next morning when i drove it to the auction house for sale, i think it knew it was its last journey.

PS –  the car sold yesterday for a shit load less than I would have liked, but I was warned it would and at least it is sold.