Unsurprisingly after seven beers last night I slept like a baby and woke at 6.50 which seems to be the prime crowing time for the local rooster. This  suits me well. I woke feeling a wee bit dodgy, not hungover, just jaded I guess. I followed yesterdays example and lazed around till 8.00 then had quick internet catch up then off for breakfast and on to the dive shop for 9.00.

Today we are diving T3 (Awesome), I’ve heard good things about this site from lots of people and it was on my to do list for the Perhentians. One of things I’ve really liked about Spice Divers is they actually listen to the requests of their customers, they ask what we want to dive and how many days we have to do dive the sites, then try to fit the dives in around customer needs. This was cool, especially as I got to do all the dives I wanted – it pays to be a repeat customer as well 🙂 The schedule was changed a bit so I could do T3 in the morning and re-visit Sugar Wreck on the mid-day dive; that the other divers I had befriended were keen on doing the same helped I am sure, but I know they bumped some new customers to fit in what I asked to do.

T3 (three reefs) is about twenty five minutes away by boat, as there was only five of us (Daniel, Jimmy, Catherine, myself and Mike the dive master) diving we took a small boat and had a pretty good run out. The swell is a lot smaller early in the mornings. From the surface T3 is just a couple of rocks sticking out of the water about a hundred metres off shore.

There are some areas down to 24 metres but as only half of the group were able to dive past 18, the dive plan was to stick around the 16 metre mark – which means a longer dive time anyway. As it turned out, and something that is true of most of the sites here, the visibility is fabbo to around 16-18 metres and then deteriorates quickly, so the good stuff mostly happens at the higher depths anyway. What was really cool here was the thermo clime (difference in temperature – and usually visibility as well) was really marked here, I was able to float in warm water and lower my arms into water that was significantly colder, there was almost no gradient between, cool.

There was not a huge amount of stunningly interesting life at T3, the site is interesting as it is a mass of huge boulders lying on top of each other, there was plenty of fish and some great nudi branches but the fun thing at T3 is the swim throughs. We did four short tunnel dives, a couple were complex in that they were narrow and had turns, so when you entered the tunnel you could not see the exit. On one of the tunnels I got a bit stuck and had to think about how to twist my body to get myself and the tank through.  In a cave on the surface I would freak out, but under water I was quite calm and able to make logical decisions, – it was only a matter of a couple of seconds, there was no threat of harm, but it did interest me that I didn’t get scared – faith in the dive master? but logically I could see I could get through, it was just working out the puzzle. It was fun 🙂 it was one of my favourite dives.

To maximise dive times for all of us the DM took those who got to the low limit on air (50bar) to the surface without taking the whole group through the decompression stops, which meant I was up before the Catherine and Mike, though not the first. So I had Jimmy take a picture of Daniel and I in the water and then I snorkelled down and took some shots of Catherine and Mike below. 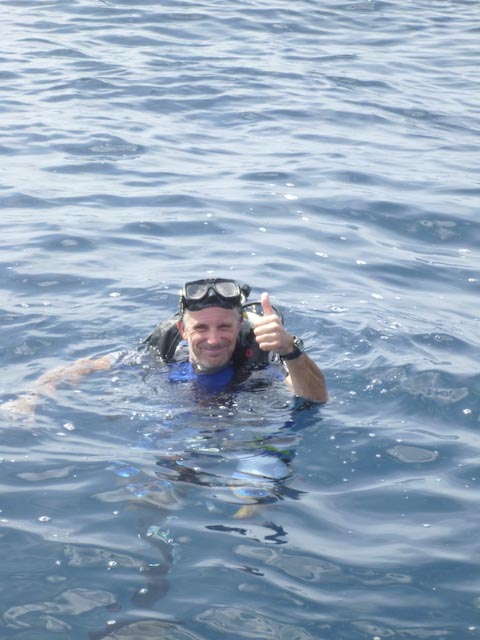 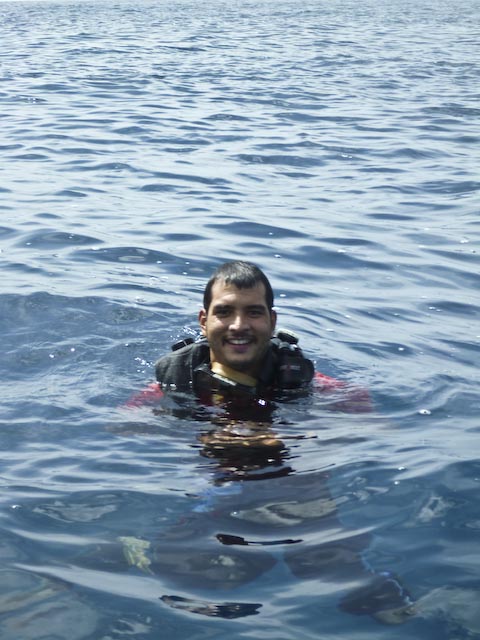 As we got close to the island we were dive bombed by some terns ! 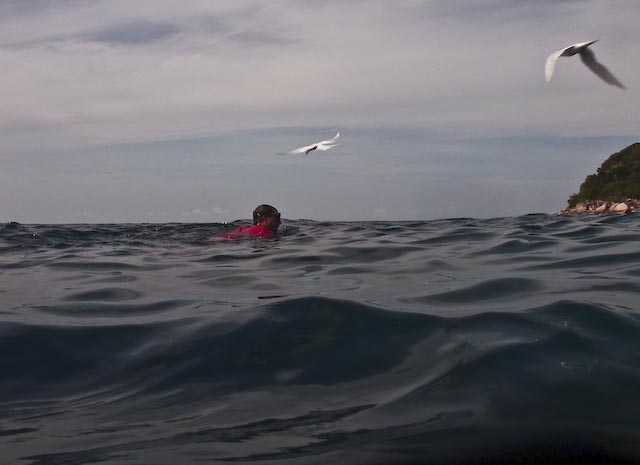 This is how tight some of the swim throughs are – Mike exiting one, shot from the surface.

After the dive I hung around the shop chatting with the other divers and staff. This seems to be one of the features of the shop, an encouragement to socialise with the other divers, whihc is great for us solo travellers. Richard and Blathnaid, my friends from Myanmar, recommended the shop because of this aspect. After the break we were diving Sugar Wreck again, I dived this on my first day but had really bad mask issues so didn’t get to see a lot. I was dead keen to go back as I love a wreck dive ! 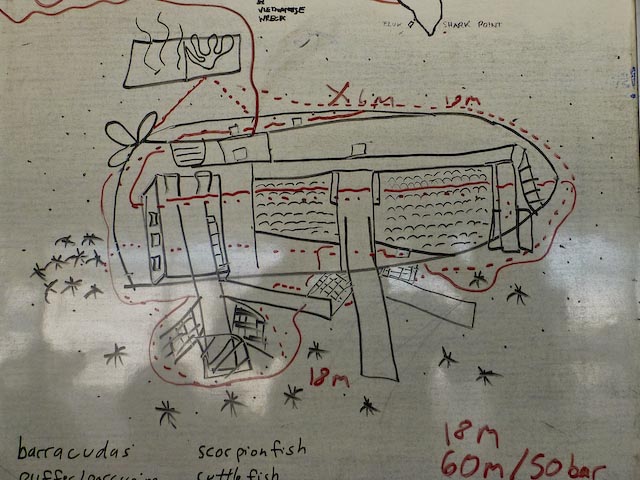 We had a larger group for this dive so split into two, I got to dive with Jimmy, Daniel and Mike again along with a new diver. It was a good dive, again, visibility was best above 14 metres, but the ship had lots of places to explore – though of course we were not allowed to enter at all. The ship went down in 2001 and was carrying sugar – obviously. There were a lot of scorpion and dragon fish so care was needed. We did see some awesome little coral cat sharks – these are about a foot long and hide in the smallest spots, just lovely creatures.

And that was it, diving in SE Asia is over; but I did do thirty two dives in four countries – so I cannot complain !

After the dive I went back to my room and chilled for a while before heading back down to the shop at 7:00 where I hung around chatting till almost 9:00 – when the evening storm passed.  I went for dinner with Daniel and Jimmy and then stopped for a couple of drinks with some of the dive shop guys. I could see they were going to kick on for a biggie so I left at 10:30 and went to bed.

There were some cool fire dancers on the beach ! 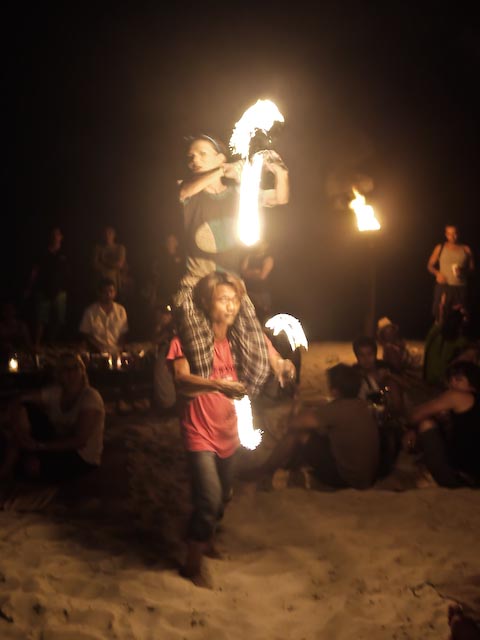 I leave the Island in the morning. I really regret not skipping Koh Tao and coming here earlier, once I got into the groove with the shop this has been one of the more enjoyable places to hang out, and the diving has been exceptional. A highlight of the trip.