Back to using MS Word, not that I disliked BlogDesk, I just realised I lost my own original copy of the blog… I may go back to it yet.

Mike was feeling unwell this morning so we hung around the hotel for a while to see if things would improve, around mid-morning the power went out which knocked off the fan and air con, didn’t do much for Mike feeling lousy but was a good reason for me to go out. I had sort of arranged with Giovanni to ride out to Old Bagan with him, do a couple of the temples that neither of us  had seen and then go our separate ways.

Our first stop was LokaHteik Pann, one of the big temples on the way to Bagan.

This temple had steps right up the outside which was quite unusual for the area but great for the views…. A tour bus full of Burmese arrived as we were there, they were escorted to the top and back down again and back onto their bus, all quite normal tour bus behaviour.

When we got to the bottom I ventured off into one of the other buildings and found this stunning example of a reclining Buddha, probably 20 metres long, the Buddha was only lit by the three doorways it was just awesome and I cannot believe the tour group did not stop to see it. It was the most beautiful one I have seen in Myanmar.

Next was Sulameni Pagoda, which had been extensively repaired with assistance from the Korean government, and this was subtly noticeable in the site. We were here at mid-day again, which sucks photographically, but does mean very few other tourists and more time to look at the detail. This temple had some stunning art work inside, a lot of which was in original condition, or if it had been repaired it had been done very well – so maybe good on the Koreans for being subtle. I was faffing about admiring the art and taking photos and found Giovanni sitting around outside. I said how much I loved the murals, and he said “I am Italian, we have great murals” . I had to laugh, I guess when you are used to Michaelangelo , the works here are very crude…. plus a wall with 999 Buddhas is probably not that interesting !  I still loved it. (apologies, just saw that this image is wonky !! and i cannot be stuffed fixing it !)

We went our separate ways from here with Giovanni going back to the temples in Old Bagan and me heading out to the southern area. My first stop was Dhamma Yazika pagoda, which was an odd 5 sided pagoda built in 1196, quite different to the others in Bagan. It has also had extensive renovation and is quite well visited by local worshipers. 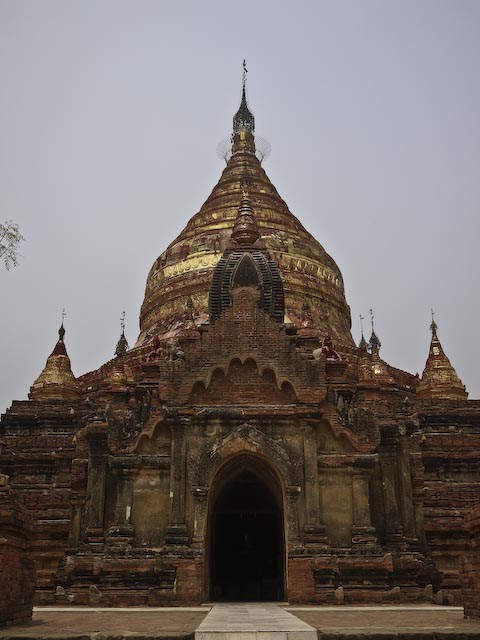 This was the most southern point on my travels and for me the last place that was ‘fun’.

[rant warning] I like temples, I mean I really do like them, not for any religious reason as I am a confirmed non-believer, but I like them as sacred places and respect their reason for being.  I like to spend time looking through them at my own pace, looking at what I can (I respect all the rules and never go across barriers) and in the order that takes my fancy, and often this is in the “wrong” order – but I don’t care. What pisses me off is being followed or ‘guided’ around the sites by souvenir touts, at the next temple I went to the ‘guide’ got quite annoyed as I was not going where he wanted nor at the pace he was dictating, I chose to stop and look out at the view, or look at the images that were ‘uninteresting”.  it got worse as I went around the southern temples so I rode off in a huff and it ruined my day. Well not really as it was still freaking awesome ! [end rant]

Stupidly I did not get the name of this white pagoda, but it is stunningly beautiful and you cannot get inside without the guide. This was the first locked pagoda I have come across in the 3 days of touring Bagan, I can understand why they are locked (sort of), the murals here are great and it appears few people come here. And I am sure the guide is trying to be helpful, but not speaking anything but Burmese and speaking through a mouthful of betel nut was next to useless. He also got grumpy as I was wandering at my own pace, but at least I could take photos… 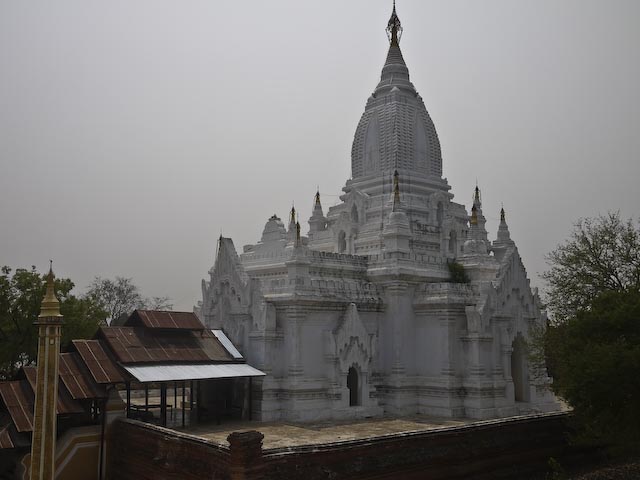 I loved this nat image.

I left there a wee bit frustrated and rode off hoping to find some more obscure pagodas down the dirt roads.

I got to Nandamannya Pahto which had some stunning mural work, but this one I was not allowed to take photos, though the betel nut chewing incomprehensible guide was willing to sell me some art works showing the murals.

I just got the hump(not visibly – bad loss of face and offensive in SE Asia!) , got on my bike and rode back to the hostel.  I met an American guy who was heading in the opposite direction to me and he said it just got worse…. and damnit my bike was awesome all day !

I guess most of you (if you have made it this far – maybe not ! are sick of temple photos anyway)

I had a wee lie down and Mike was feeling a whole lot better for not going out today. Giovanni and I caught up again later on and went out for a final ride around town to look for a sunset, we headed down to the river and found these  monk trainees kicking a ball around at the back of the monastery. 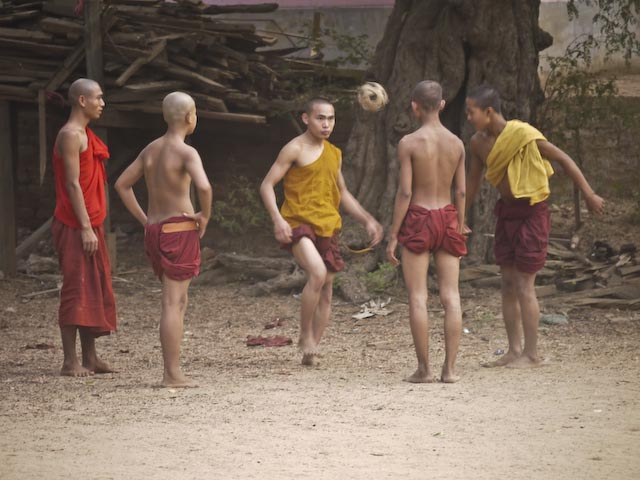 Then went down to the river for sunset.

The three of us left reconvened for a final meal at Weatherspoons and I spoiled myself with a big burger – a massive protein hit. It was damn good… while we there we watched the owners kids  counting spaghetti sticks, we asked him why and he said he imports his spag from Italy, it was expensive so he wanted to make sure all his customers got the same amount per meal, rather one getting too much and another not enough. Awesome.

Giovanni was on the 5 am direct bus to Inle and Mike and I were on the indirect at 7.00 so it was an early night.