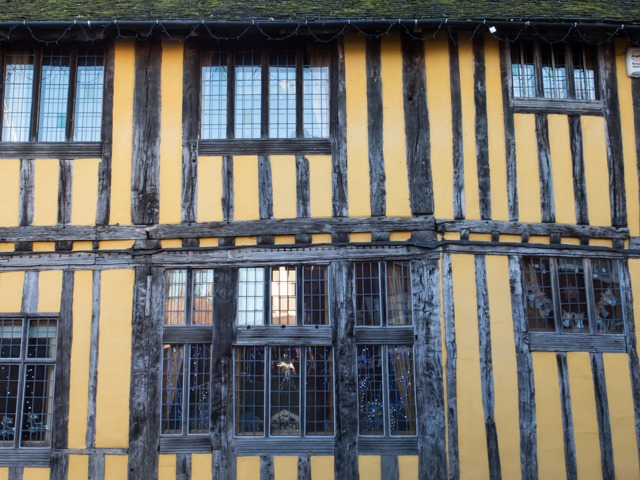 I cannot believe that the year is almost over, another one gone. On the 27th I celebrated the 4th year of my 2 years away from Auckland. When I was considering leaving home all that time ago I was just thinking of travelling and seeing the world, taking some photos, enjoying different cultures, experiencing new things and challenging some of my fears and concerns. What I was not expecting was to meet someone, El, and settle down into a life more ordinary. It is a good life.

We have had a lot of fun, and yesterday and today was another of those fun times. A few weeks ago we decided to have one last 2015 trip away and booked a night in the lovely medieval Swan Hotel in Lavenham, Suffolk. I had not heard of Lavenham, but El has wanted to visit for a long time. As you will have gathered, my road tripping obsessions generally takes me southward, so I know virtually nothing about Suffolk, apart from that it is not so far away. For this trip I decided to rent a car again, though I did not like the Skoda I had as much as the Audi!

I picked the car up early, and we were on the road out of Walthamstow, and then London, by 9:00. The great thing about travelling north from Walthamstow is that it does not take too long to get out of the city and into the green belt, and it always seems like a weight has been lifted from my soul once I am out in the fresh air. I do love London, but one of the things I love about London is being able to leave it – and return again.

It was an uneventful, albeit slow drive up to Lavenham. We took the A12, as it was the most direct route out of the city, but the most direct is not always the fastest, so it was a bit of a slog for a while. Once off the main roads it is a nice country drive, though the car was vastly underpowered so not quite as much fun as it could have been.

We arrived in Lavenham around 11:00, far too early for our hotel room to be ready, but we parked in the hotel car park – some nice cars there, and then checked in before going for a walk.

Our first stop was for some brunch in one of the cafes, and I was very happy with the sausage sandwich I had. English brunches are the best.

There has been a town at Lavenham since before Norman times but it really hit its stride in the 15th and 16th centuries when there was a boom in the wool trade. Lavenham became a major trading town and at one point was one of the richest towns in England. It all went downhill from the middle of the 16th century when Dutch refugees settled in nearby Colchester and started to produce cheaper and better quality cloth. The downturn was quite rapid and by the end of the century the town had lost its reputation as a major trading post.

From my perspective the rapid decline was a good thing! It meant that the wealthy families were suddenly not that wealthy and were unable to keep up with modern architectural designs and building methods and their houses remained much as they were when they were built 500-600 years ago.

Lavenham was the village used in the final two Harry Potter films and its other claim to fame is that in the 1700s, the poet Jane Taylor while living in the town wrote the poem ‘The Star’ – from which the nursery rhyme ‘Twinkle Twinkle Little Star’ is taken. It is also rumoured that the crooked buildings may have been the source of the ‘Crooked man’ nursery rhyme as well. That is my third nursery rhyme town in two weeks !!

It is a small town, and just lovely, we walked around for a couple of hours, enjoying the old homes, which are mostly still lived in. I loved the wonkiness of it all. I expect when these houses were built no one imagined that that they would still be homes so far into the future. 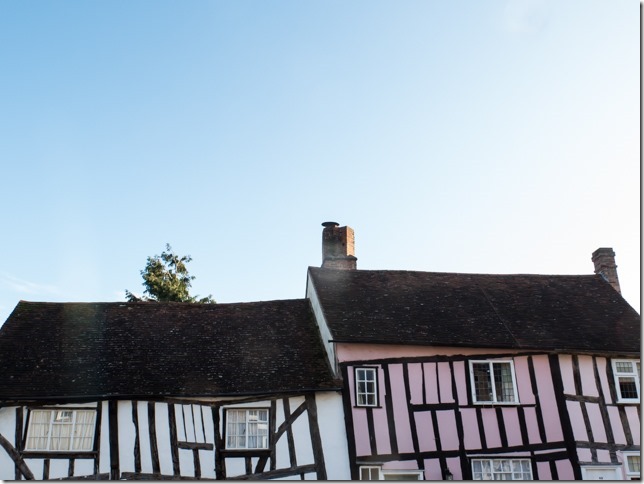 We walked up the main road to the northern end of town, and then back down one of the outside roads. We crossed over a small stream to try and access one of the many country paths, but it was really muddy on the far side so in the end we decided to stick to the road and paths of the town. 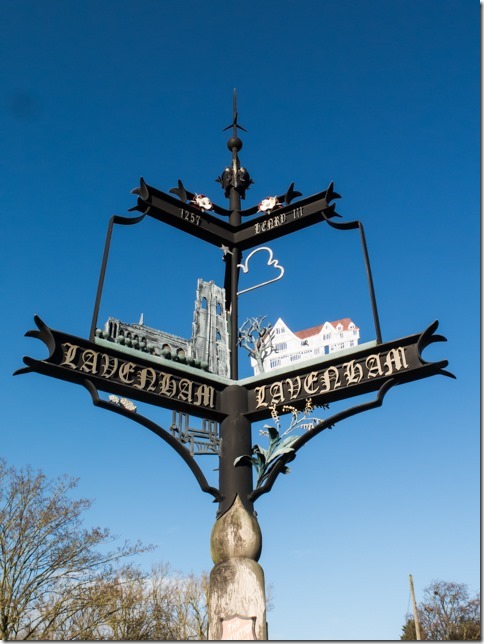 There is plenty to see even though there are only a small number of streets, it reminded us of Brugge a little bit. Being winter it was also pleasantly un-crowded, though the hotel and its restaurant were very busy.

The main square houses two museums, though they were both closed for winter, and the square is a car park which meant no wonderful panoramic photos… 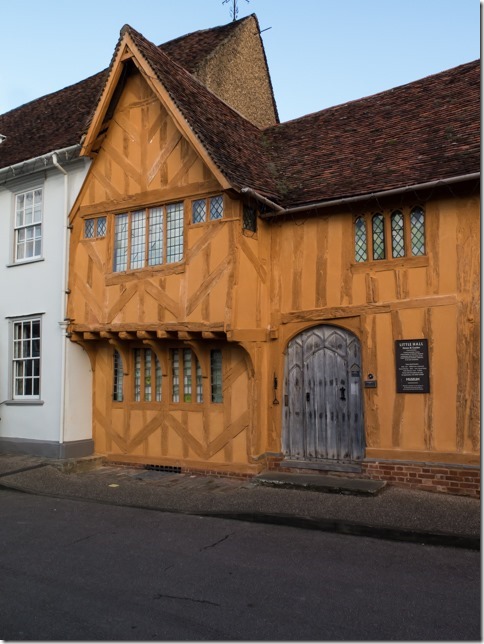 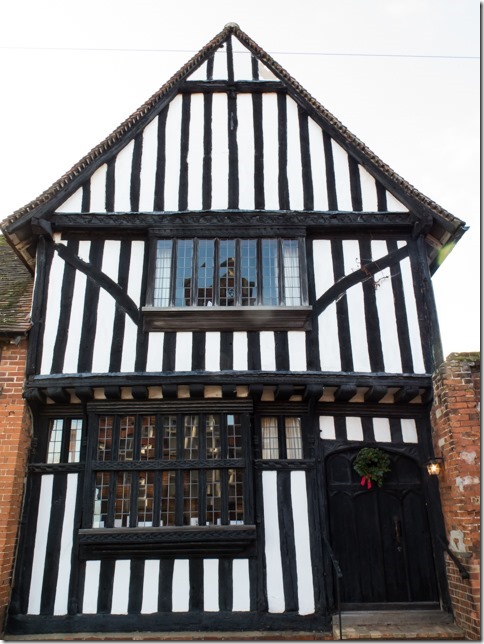 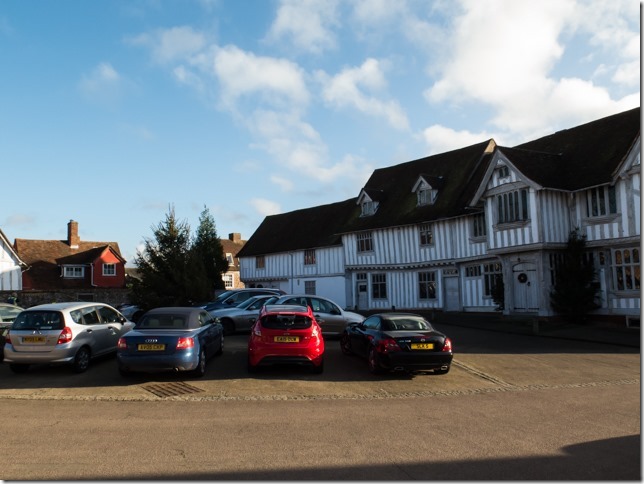 We carried on up to the Church of St Peter and St Paul on the southern edge of town.

The church was built at the height of the town’s prosperity and was largely funded by the Spring family and Earl of Oxford. At 141 feet the tower is the tallest in the UK, it looks magnificent!

We had a good look around inside, I particularly liked the wooden ceiling and the carvings on the Spring Chapel which contains the tomb of the major benefactor who died in 1523 was really nice too. 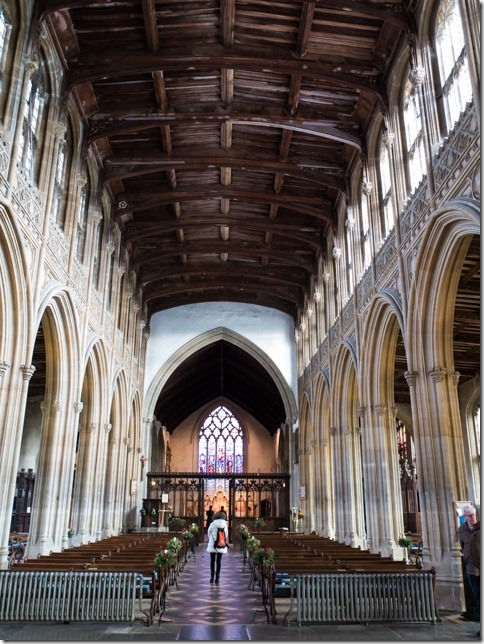 Mid-afternoon saw us walk back into town again and stop for a drink in this fabulous looking bar .

We only stayed for one drink as it quite busy, before heading back to the equally stunning Swan Hotel, where we finished the check in and headed up to our room. 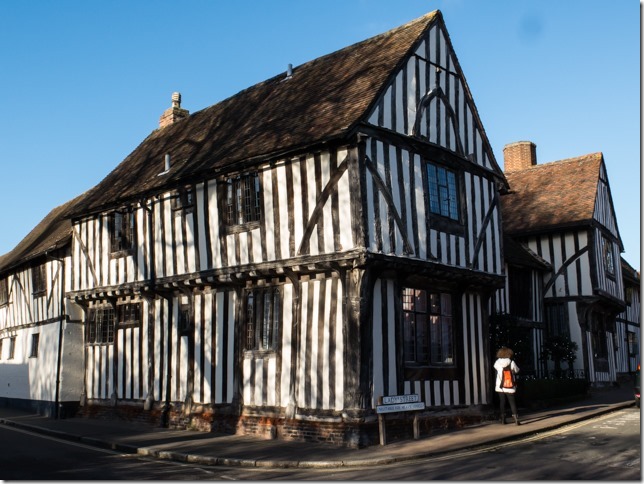 The hotel is comprised of three buildings joined together and our room was down a crooked passage, with very low doorways, small steps up and down and it was almost fun navigating our way backwards and forwards.

I was hoping to get a sunset as the day had been quite nice, cold, but clear. We decided to walk back up to the church and have a drink in the nearby pub and watch for the sky to change colour.

Naturally it didn’t! We waited until dark and then wandered back to the Swan, stopping to take a couple of pictures here and there on the way, we did take the long way around, past the front of the old guild hall.

And the front of our hotel. There are lots of Christmas lights up, giving the town a nice welcoming glow, under a waning moon. 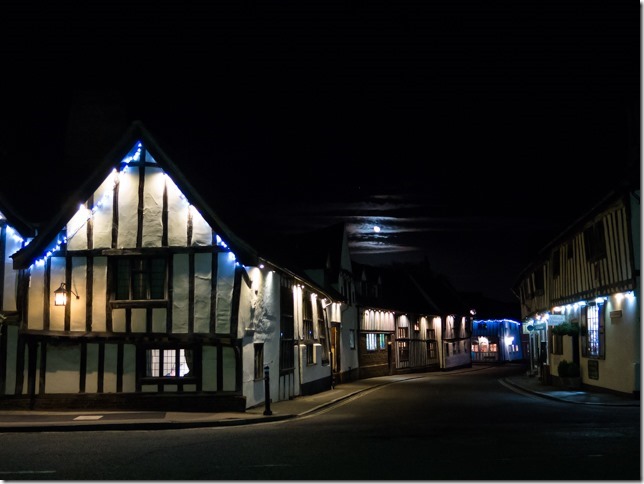 We had dinner in the hotel, ate too much as usual. The wine list by the glass was superb, so much better than most anywhere else we have stayed, so it was nice to be able to chose a wine that best matched our food choices rather than just get a bottle for sharing. For a change we had a dessert wine as well.

We were in a ground floor room, it was a little noisy in the night and the lorry that dropped some road work signs off outside at 5:30 AM were not overly appreciated. I did enjoy lying in bed listening to the creaking and groaning of the floorboards as other guests walked to, from and around their rooms. For a change the noises added to the charm of the place. Though I was a little concerned at the amount of damage to some of the ceiling beams!

The following day we decided to take a slower route back to London and visit some of the ‘Constable Country’ towns. The artist John Constable (1776 – 1837) was born, raised and painted in the area around the Suffolk and Essex border, and his most famous works come from there. It is said the light was different to other parts of the country and today it was quite different. Maybe it was the lack of pollution, or being so far inland that there was no reflection from the sea, but the light did seem to be different to that seen in London and Cornwall. I had a few attempts at trying to get a photo that captured the feel of it, but not really with much success. Being relatively flat the skies certainly seemed to be big.

Our first stop was the village of Long Melford, where we were hoping to be able to wander around, or near some of the great halls, but there was nothing open. This strikes me as a little odd, I know it is winter and the Christmas / New Year break, but surely as it is the Christmas / New Year break and loads of people are out and about this would be a good time to have things open. Just saying, as they say.

The Holy Trinity Church was open – as always. It is very similar, though smaller to the church in Lavenham and like that church was paid for by local wool merchants. 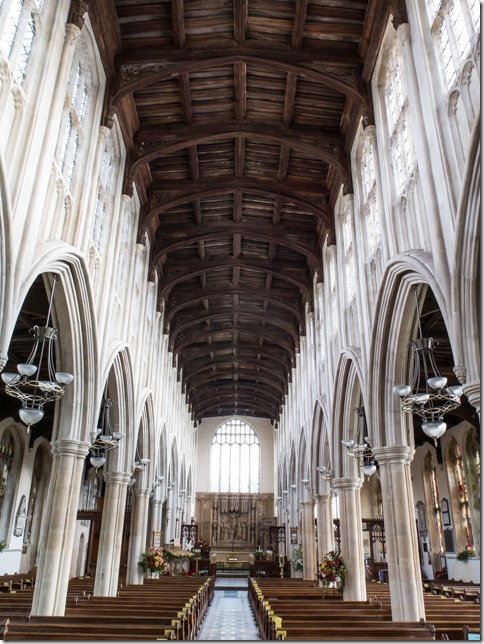 Though what it does have over the Lavenham church is a really nice collection of brasses on the floor. There are a few brasses remaining in the church including the lovely Clopton family collection from the 1400 and early 1500s. They are wonderful things.

The Martins, from the 1600s, are a smaller collection, but nice and close together. The detail is quite amazing, given their age and that they are (roped off) on the floor of the church. There are numerous sections of flooring in the aisles where you can see other brasses would have been located, sadly a lot have been stolen over the years. Even more sadly, theft has not left the church in recent times and swathes of lead piping was stolen in 2008 in a spate of church robberies all around Suffolk and Norfolk.

I also really liked this alabaster of the Adoration of the Magi from around 1350 – before the church itself was built. It is a stunning piece. 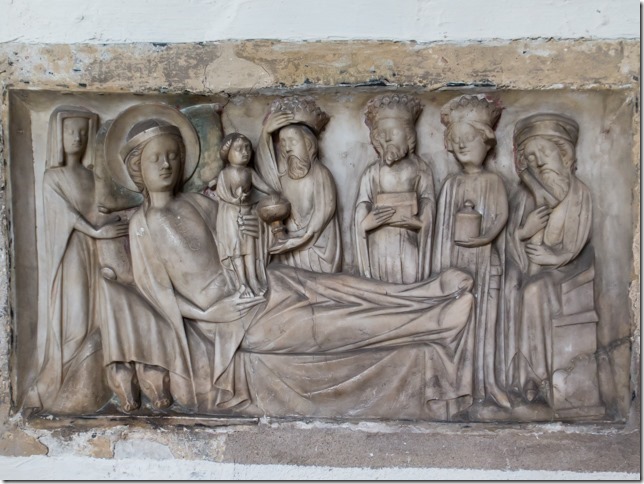 Our next stop was to be Castle Hedingham, but the castle and its grounds were closed, so this was as close I got to it…. 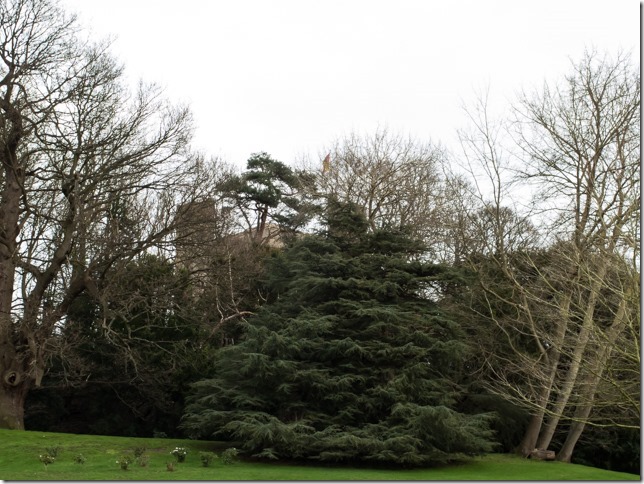 Though it was only early afternoon we decided to head on home, so from Castle Hedlingham I took the direct route to the M11 and flew down there back to London, so much quicker than heading up the A12.

It was another excellent night away, I am so lucky to live in a country that is easy to explore, with someone who is happy to go exploring with me.