I have a confession to make. I love music. I mean, I really, really love music.

Lots of people say that they love music, and they may well think they do, but after a bit of gentle interrogation I usually find that they really like music, most of the time. A bit like they love puppies and small children and other things that distract from the important things. Like music, for instance.

My love for music started in December 1988 on a trip back to the UK with my family. I was 16 and my childhood friend Nick played me the Buzzcocks song ‘Promises’. It was love at first listen, complete and total. I had enjoyed music before this momentous day, some could even say I had loved music. I was a fan of heavy rock, of Led Zeppelin and Deep Purple – my first LP was a birthday gift of Deep Purple’s Burn. I had even flirted with disco when Saturday Night Fever was taking over the world, but I had not found my true love, and to be honest I didn’t know true love really existed.

I had missed the whole punk thing. New Zealand is small, and was a long way behind the rest of the world, and without older siblings of my own or knowing anyone really connected with local music I had never heard anything like it. I believe it did literally change my life. I started my final year at school when I got back to New Zealand after Christmas and the first thing I did was look for others who had heard this amazing noise – and over time my social group changed as I met other like minded people. I bought my first records. The Clash ‘Give ‘em enough rope’ was the first LP I bought with my own money. Once I started working it was gigs and records and parties where only MY music was played. I turned into a true music snob – If I did not like your music taste then you would never be my friend. It was not pretty, this lasted for many many years – I have mellowed a bit, I think.

I was, and am still, very fussy about music. I like what I like, and it is within a very narrow band. I did finally move on from punk, though I still like and listen on those rare occasions when yelly music is required. My tastes are a little more publicly acceptable – I still like guitar orientated music, but now acknowledge there is a place for keyboards, in the right place. I think it is finally time to admit to myself that really I like pop music, I do not mean popular music, just music that is a bit pop. Lots of melody a bit of vocal harmony, jangly guitars, solid beat, but…. There has to be a bit of a racket going on as well, it cannot be all sweetness and light. There can be sweetness and light, in fact I like that, but only if it is all descends into some noisy feedback, overdriven chaos. Which leads me to Ride.

In 1990 the Oxford band Ride released their first EP Chelsea Girl on the Creation label. I am not sure when I first heard it, but it must have been soon after its release. It was a great song, sweet and jangly and then nice and noisy, I loved it, and then I never heard it again for years. I bought their first album Nowhere soon after it came out later in 1990 and it has remained a favourite album of mine since. I still had not heard Chelsea Girl again, it was not on the album and while the song itself faded from my memory the fact that I liked it did not and I did not get to hear again until well into the Napster days when I finally found an illegal download of it. It immediately became one of my favourite songs again, and slips in and out of being my favourite song of all time. I finally got a copy on a CD compilation of their first three EPs. I still want it on vinyl though…

Ride split in acrimonious circumstances in 1996. They never came to New Zealand so I never got to see them play. They reformed last year for a few shows and I tried to get tickets to their first London gig, but missed out. I wasn’t prepared to go to a festival to watch them so sort of forgot about seeing them again.

A couple of weeks ago they announced a series of shows to celebrate the 25th anniversary of the release of Nowhere, I jumped straight on to a ticket booking website and grabbed two tickets for the show at the Brixton Academy in London. Yes !!!

El could not make the concert so I ended up going to down to Brixton on my own. In 2008/9 I did a small amount of gig photography and got quite used to going to concerts on my own, so while I would have liked to have shared one of my favourite bands playing one of my favourite all time albums, being on my own was OK as well.

I arrived at the venue early enough, raised a second mortgage on my house so I could afford to buy a can of beer and sat myself down upstairs. I had decided to get an upstairs ticket, I was never going to get close enough to the front to take a photo so the front of the balcony was a good second choice. I took the little Canon G16 as I was not sure if they would let me take a DSLR in. My spot was not the best, but I took a few photos, very high ISO and a bit far away, they are not my best work. A good memory for me though!

Ride were supporting themselves in this show, playing a first set of classic songs, mainly from their second album ‘Going Blank Again’, followed by the Nowhere album. It all kicked off nice and early at 8:00pm. 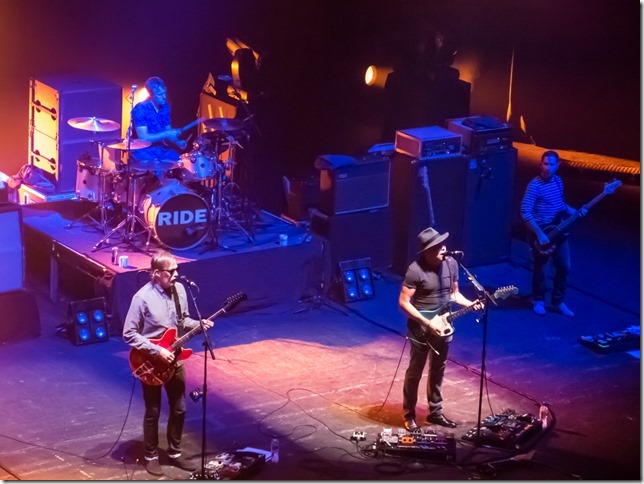 They were fantastic, playing most of my favourite songs in the first set, starting with Leave Them All Behind and ending with the wonderful Mouse Trap. The lighting was brilliant and the sound quality was superb. The band are playing better than ever and are incredibly tight, with the solid rhythm section of Loz Colbert on drums and Steve Queralt on bass holding it all down for the twin guitar/twin vocal attack of Andy Bell and Mark Gardener. 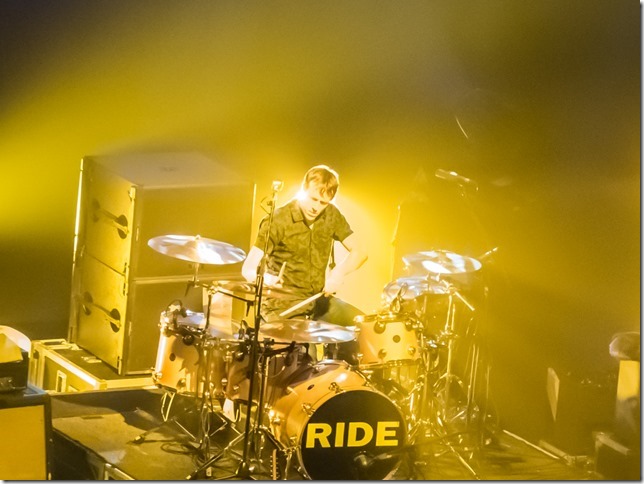 There was a good crowd, and they were really getting into it.

After a short break they returned to play the Nowhere album from start to finish. My favourite track from the album is Polar Bear, and I really expected this to be brilliant and noisy and a bit of a squall, but it wasn’t. It was still great but just a little too clean sounding for me. What did surprise was the last track on the album and the one I always liked least, Nowhere. Live it was fantastic, a highlight of a really good set. 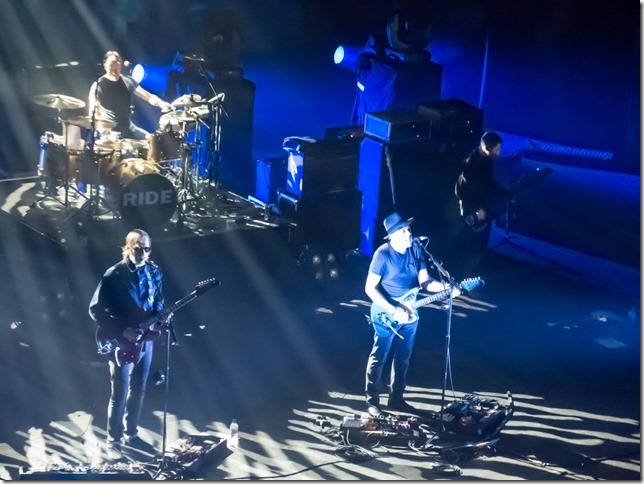 Andy – 10 years as the bass player for Oasis, mod haircut and sun glasses – and a lovely Rickenbacker guitar. 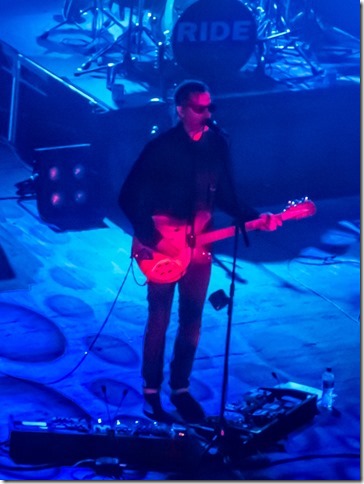 I went downstairs to the main hall for a short while at the end of the set, it was really packed down there and I could barely get in through the door. Sadly there were too many people hanging round at the back chatting so I went back up stairs and, after getting told off by security for standing at the top of the stairs, took another seat closer to the centre of the venue.

The album cover for Nowhere is a classic, and has been the inspiration for a few photos over the years. Including this one I put on Flickr in 2008. I named it Chrome Wave, after a Ride song.

The Nowhere record sleeve was used as the backdrop between sets.

There was another short break before they came back on for the encore. They played Drive Blind, which is a fabulous song, one of their earliest and it really did not disappoint. A mix of sweet pop with a massive wall of noise break in the middle. Fantastic. I have read that this is often the final song in their set and was gutted that Chelsea Girl had not been played, but thankfully, I was wrong. As the last chords of Drive Blind faded Andy Bell, plucked the first few notes of what is again my favourite song of all time and I jumped with joy…

It was a great gig, almost perfect. There was only one song in the first set that I did not recognise. The sound was really good throughout, lighting was great and the band fabulous.

Andy, Mark, Loz and Steve  – thanks for a great evening and some fantastic songs!

The Buzzcocks thing is not actually true. Nick first played me ‘Hanging on the telephone’ by Blondie which was (and is) a great song. This was immediately followed by the Buzzcocks track. Sadly in my musically snobbish world, having Buzzcocks as a first love is much cooler and I pretty much wrote the Blondie episode out of my memory.