I had been casually looking around for street art in Auckland and hand not really had a lot of success so I resorted to good old Google to see what I could find. I was so glad I did as there was a street art festival on and around Karangahape Rd from 3-5 May, which was now…

I arranged to meet a friend and photographer Katharina in a cafe so we could walk around together, look at the work and take some pictures. As it was a Sunday I managed to get a park on Cross St, right near one of the walls being painted. It rained – heavily, almost as soon as I got out of my car !

Mica Still – painting in the rain.

I ran up through the rain to St Kevins Arcade for lunch with Kats until the rain had stopped and then we went for a walk. First stop was down the stairwell at the back of the arcade. There is a fair amount of painting here, some is old and some is new, and most of it is great ! I cannot tell you who the artists are though there is a Gasp! and I think a Component or two. If anyone stumbles upon this post and can help out that would be great. 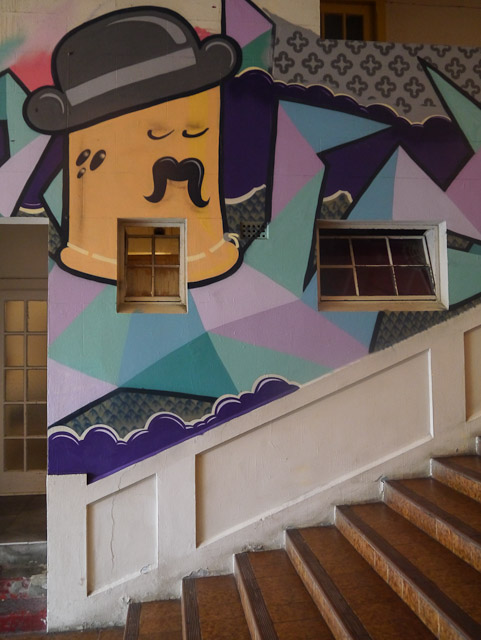 Out of the side door of the arcade we found a couple of pieces on the there, again I am not sure who they are by, but the tiger is beautiful – and very well hidden. Th K’ Rd Masive have been painting here, but I could not get a decent shot of the wall as a truck was parked there. 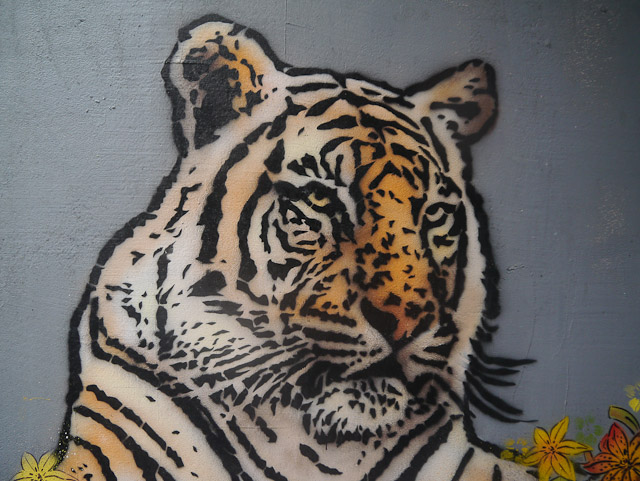 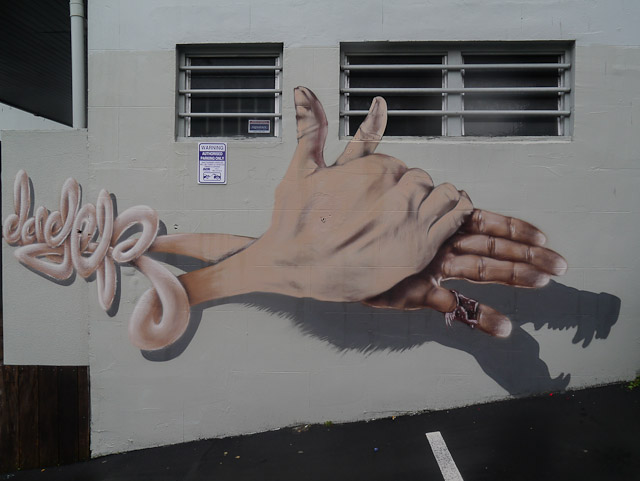 While we were looking at this lovely shadow play we met some people who gave us a map of all the All Fresco paintings which was just great – well done to the organisers for doing a  map – as well as organising the festival!

We took a walk down one side of K’ Rd and back up the other, most of the work was in side streets. Starting with Haha in Pitt St. All done by stencil. 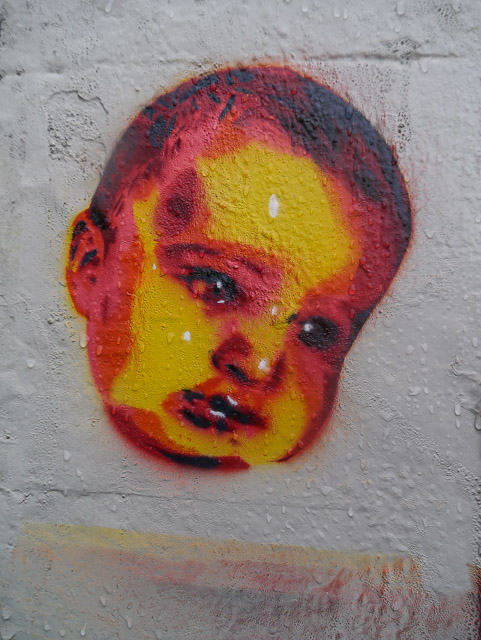 Gasp ! had a piece on Bereford Sq.

Next was Wert 159 still working in Samoa House Lane, you can see where the rain had been washing some of the colour down the wall 😦 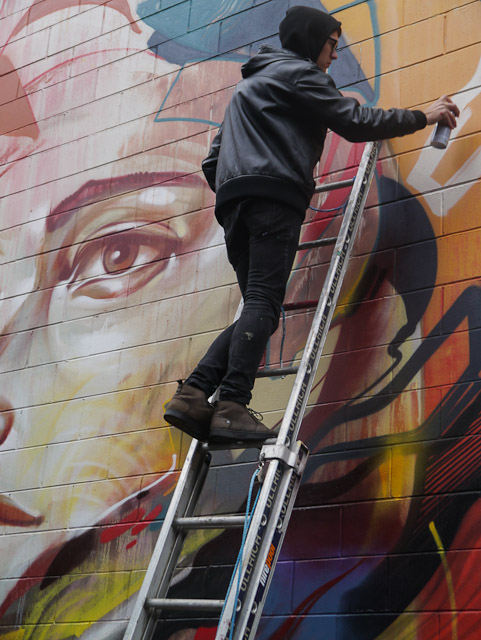 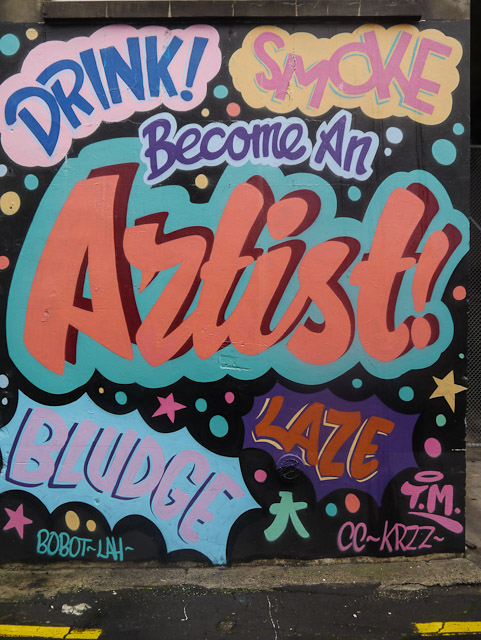 Walking to the next site we passed this alley which had quite a bit of interesting stuff to look at, including another Trustme. There was not enough space to fit it all in, but it says “We drink to forget our nights to remember”, I liked that.

On Hereford St there was this amazing piece, the scales were a cityscape, but did not translate well under my camera.

There was also this piece hidden behind a wall. 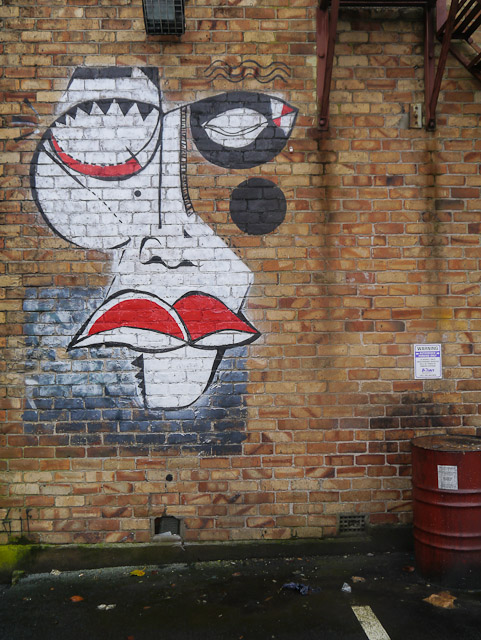 There was a large wall with a cherry picker on it on the corner of Gundry St but the artist must have given up in the rain as there was no one home and not much paint on the wall. I felt sorry for the artists, it was not a good weekend to be painting on the streets. 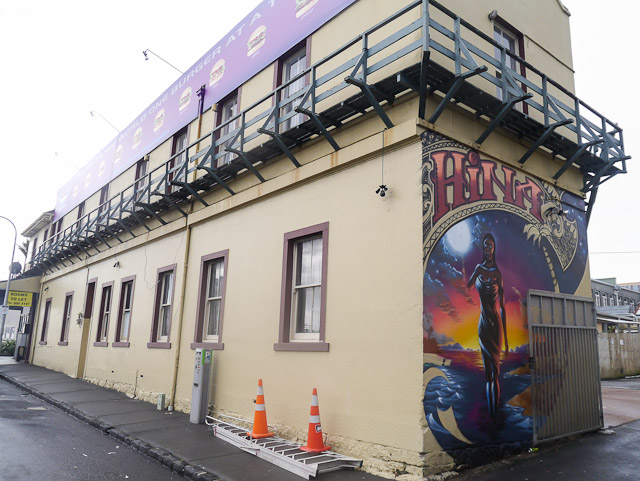 And we found this on a wall down the back of Edinburgh, I do like all these sort of hidden things.

And then back to where I started on Cross St and thankfully the rain had stopped so Mica Still could finish her work before jumping on a plane back to Wellington.

Mica was sharing a wall with Xoe Hall and Erin Forsyth who were doing a joint piece that was just fabulous. I loved the skull moths. 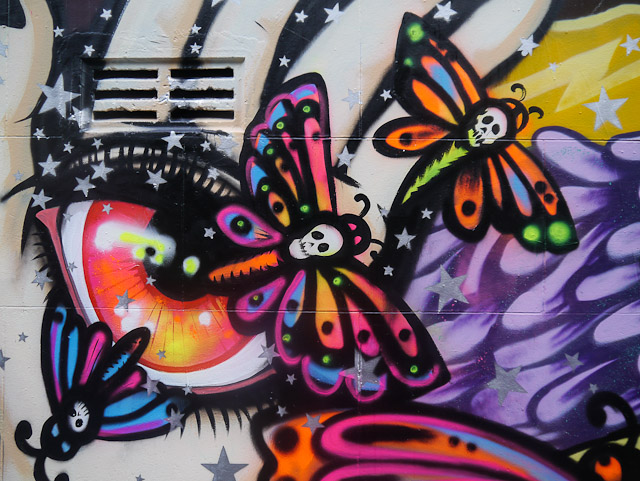 And finally I found this up an alley – love it !

It was a great day out, thanks Kats for keeping me company and a massive thanks to all those involved in setting it up, to those fabulous property owners who allowed out city to be a bit brighter and happier and to the artists who contributed their work !