I wanted to be out and about as early as possible this morning to get to the museum ticket office for opening time, which was theoretically at 8:00, but this is Sri Lanka, my aim was to get as much touring of the ancient sites as possible before the worst of the heat kicked in. So I leapt out of bed as soon as I woke up at 7:40, all ready for coffee and the day. Except it was 6:40 and there was no coffee for another thirty minutes, damn ! I did find this wee frog in my sink when I went to brush my teeth. 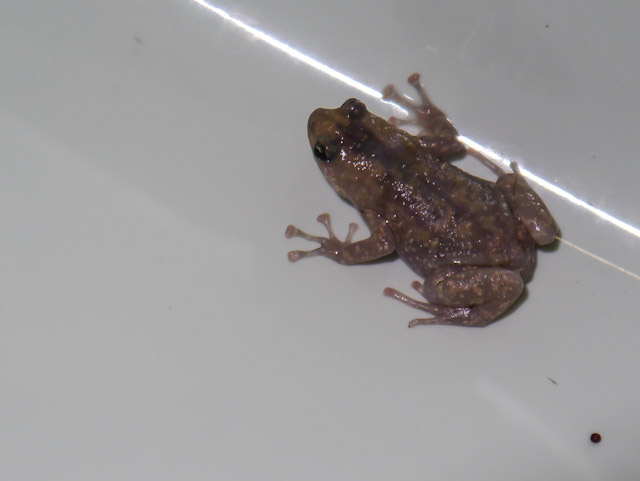 Just like last night’s dinner, breakfast this morning was massive, a huge plate of fresh fruit, about 6 slices of toast and then I was asked if I wanted eggs…. I just asked for one, between two slices of toast and I did not finish the fruit either > Here is me trying to lose a couple of kilos and I get given these massive mounds of deliciousness. Shame about the coffee though 🙂

I rented a bike for the day – it is possibly the most unstable one of all my travels, but so much better than walking, and rode to the museum for 8:20 and lo and behold it was actually open. I was served by the surliest man I have met in Sri Lanka, and he was deeply un-amused when I did not have exactly 3125 rupees (about 31NZD) for the entrance ticket. He gave me my change in two chunks, I think he was hoping I would forget the last 500, no chance you miserable git.

I hot footed it from the museum, past all the tour guides and tuk-tuk riders who said it was far too hot to ride a bike or too complicated to find things, depending on what they were selling and I was at he entrance to the main Polonnaruwa site before 8:30. Perfect !

I took an awful lot of photos and visited all of the relics inside the area over my five hour visit, I have been very selective in what I have written about or this would have been an even more mega post…

Polonnaruwa was first the capital of the Indian Chola people after they invaded around one thousand years ago and moved the capital here from Anuradhapura. When Sinhalese king Vijayabahu 1 defeated the Chola and kicked them off the island he retained Polonnaruwa as his capital and it remained the centre of Sri Lankan life for the next three centuries.

I decided to ride to the Tivanka Image House first, the furthest point from the entrance and work my way back. It was a toss-up between getting to the distant relics first while it was cool or getting to the nearby, and more popular items while there was virtually no-one around. Practicality finally won over wanting to miss tour bus groups so I made the three km ride first.

The Tivanka Image House was sadly under renovation on the outside, but the interior was lovely, it houses some of the best original wall paintings in Sri Lanka as well as a dark and mysterious headless Buddha image.

My next stop was Gal Vihara, famous for its Buddhas carved from a single piece of rock, quite amazing, the reclining Buddha is fourteen metres long. I have a wee confession; the photo has been cropped because my finger was in the bottom of it, I have not done that for a long time !!  It is hard to believe these massive and beautiful works were carved in the 12th century. 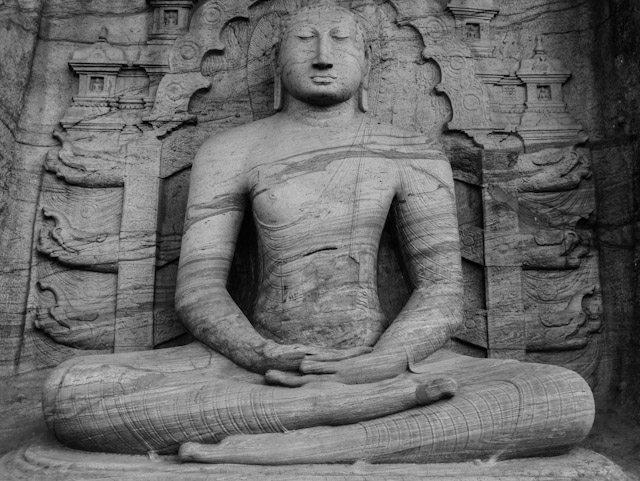 I really liked it here but it was extremely hot, even at 9:30 am and there was no shade in a convenient Buddha image contemplation space. I finished my first 500mls of water here and bought a second from one of the stalls, I was not going to make the same mistake as the other day and not drink enough water.

I next visited what is known as the Northern Group which contains a number of buildings including Buddha Seema Prasada the tallest building in the group and was constructed in the 11th century. It contains another large and headless Buddha as well as a very nice statue at the entrance that I have not seen before. 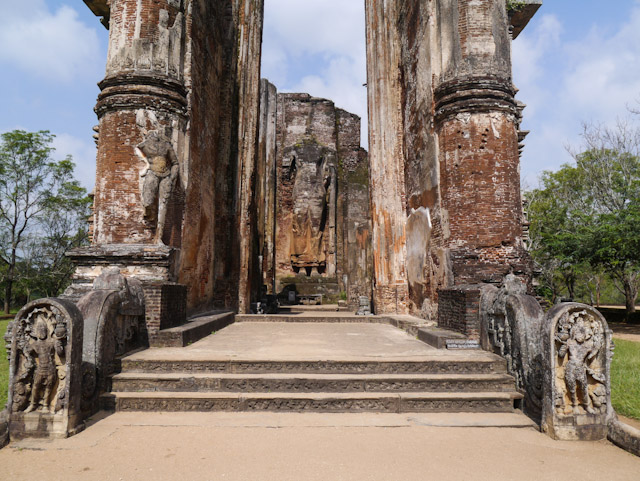 The Kiri Vihara was built under the guidance of Queen Subhadra, the wife of King Parakramabahu who has been credited with most of the construction here. When it was rediscovered in the jungle it had retained its lime bleached white vista, the name Kiri Vihara means milk white. 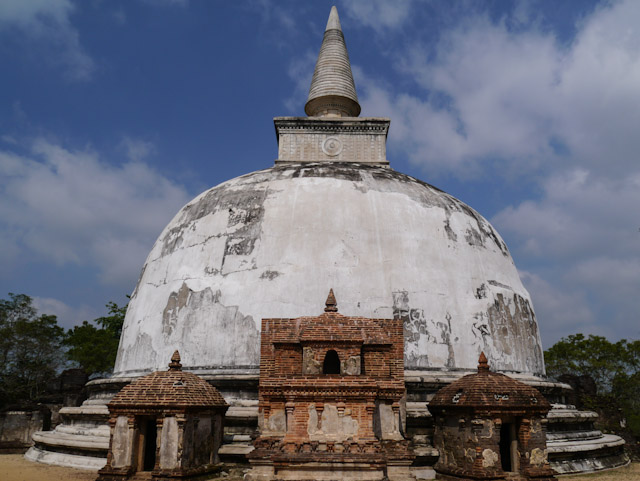 I also really liked this partially moss covered dagoba nearby. 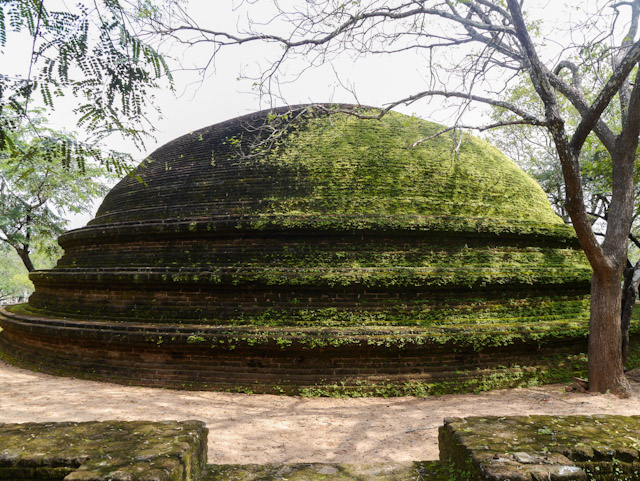 I was mostly alone here so wandered the broader area of ruined monks cells and meeting rooms around the outside of the central dagoba. I came across most of the local wildlife here; monkeys – having, what looked like swimming lessons, once this guy had done a few laps they all jumped in! 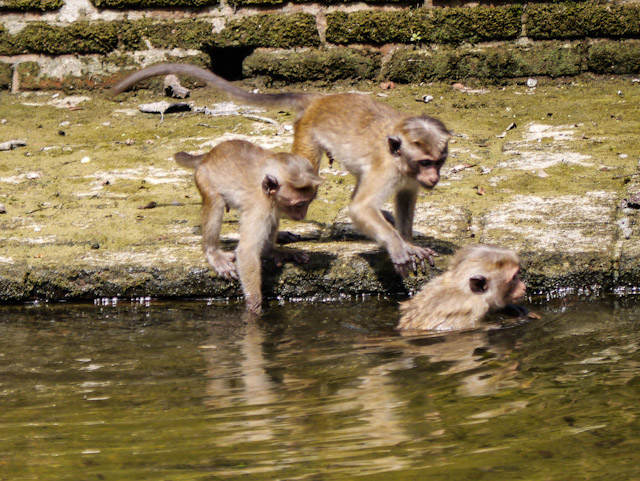 A couple of monitor lizards 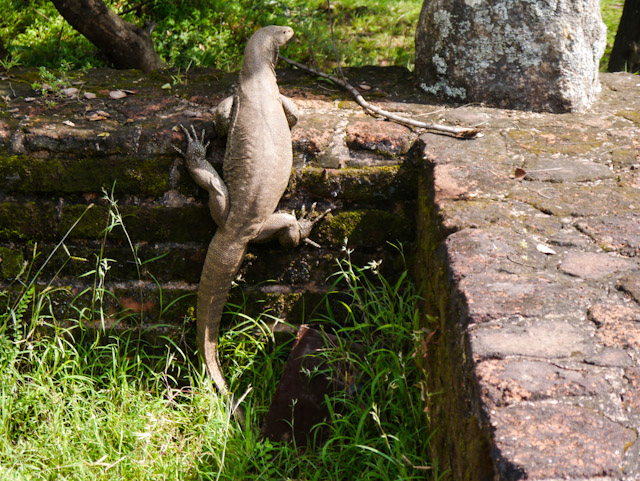 Some cows and of course the ubiquitous Sri Lankan dogs, I have never seen so many dogs, luckily so far all of them have been totally uninterested in me.

In the distance I could see Rankot Vihara, the largest dagoba in Polonnaruwa and my next stop.

There were some really good old Buddha images here. Sadly I saw two couples walking round the dagoba wearing shoes and hats which is a big cultural no-no, and they must have walked past the sign advising not to wear them. Disappointing and ignorant behaviour!

The history of Manik Vehera is largely unknown, but I did like the frescoes.

There are a few remains from the pre-Buddhist Indian Hindu period and this is the only one remaining with a Vishnu image, a number of bronzes were found here and are in the museum. 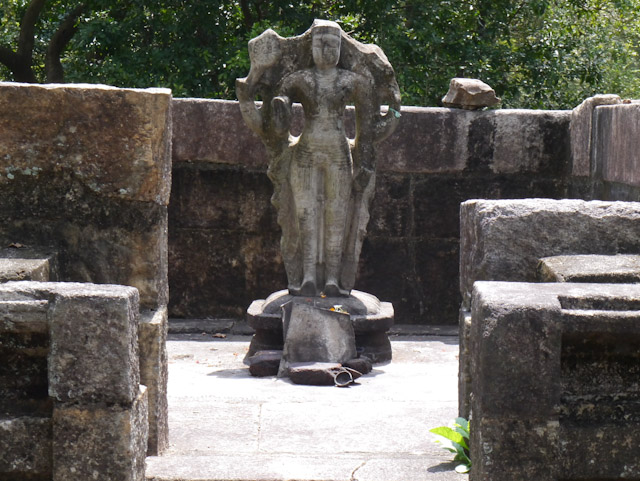 There are also a couple of small Hindu temples including Siva Divale (no 2) it was built in the tenth century and is still used by the Tamil people who live in the area. 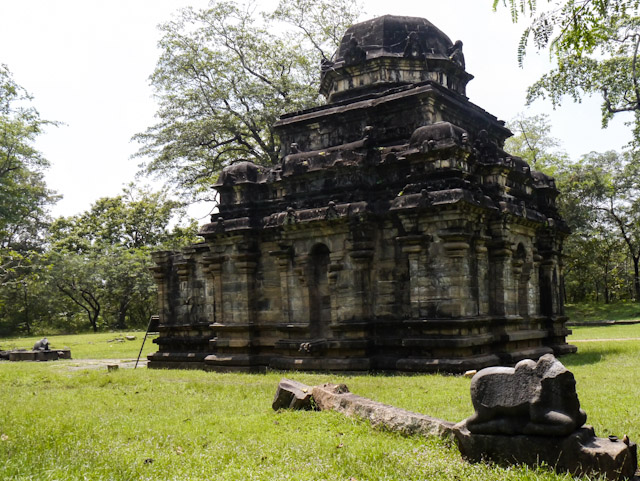 Very little is also known about Pabula Vehera, but I liked it, it was completely off the main path and I imagine is quite unvisited. Both this and Siva Divale above were down a little and very rough side road, so those travelling by car would not get to see it. One of the real benefits of doing this visit by bicycle ! 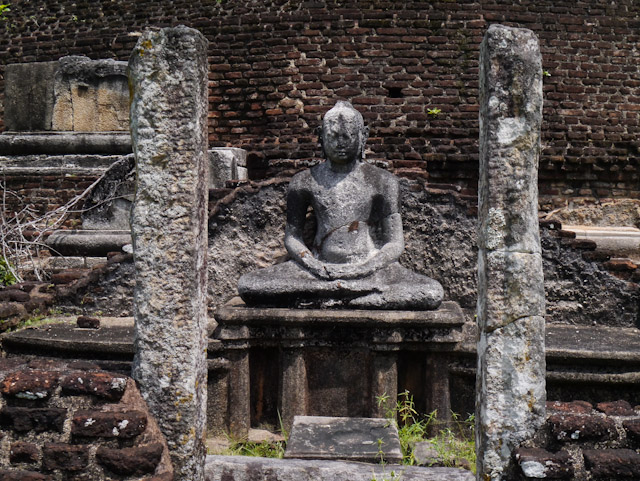 I made my way down to the main part of the site to the “Quadrangle area”. I was going to buy more water but just after I got there a tour bus load arrived so I dived into the ruins to start looking before the group got in my way (and me in theirs). My first stop was this huge inscription, Gol Pota, the largest in Sri Lanka – and there are an awful lot of them ! It was created in the shape of a manuscript under the reign of King Nissankamilia in the 11th century. It is 9 metres long, weighs 25 tons and was carved in Anuradhapura, 100km away and dragged here… 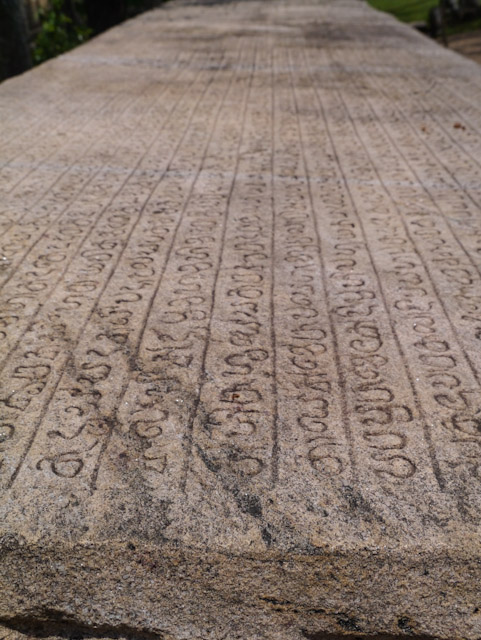 I quickly nipped into the Hatadage for a quick snap just as the tour group arrived. I have been photographing some of the moon stones that are the entrance to many of the Buddhist monasteries and this is the best one I have found so far. 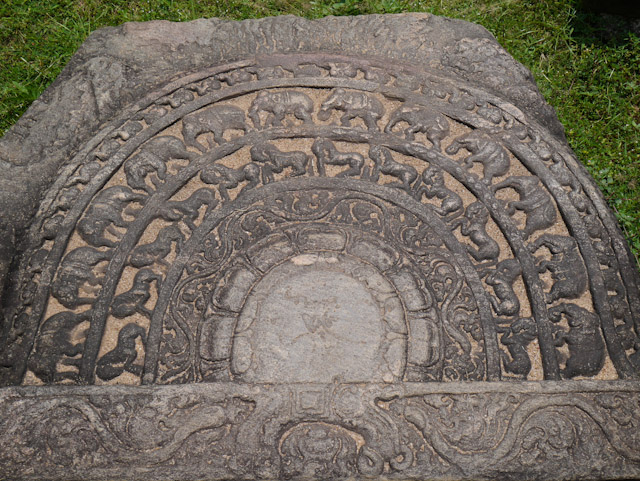 The Vatadage was my favourite building in Sri Lanka, so far anyway. I just loved it. It was also heavily crowded when I got to it so I walked round it and snapped some details and then came back to visit it later once the tour bus people had left. Sadly one of the group had climbed onto the stupa to have a photo taken with one of the Buddha images, there was an uproar with police whistles going and the tour guide yelling, what a bunch of fools, I would have caned them. Some people should stay at home. Like a lot of the ruins here the Vatadage has a contentious history though it is believed to have originally been constructed in the 12th century by by Parakramabahu I to hold the Buddha tooth relic.

I loved the dancing dwarves frescoes. There a lot of these and along with elephants that appear to be the most common of the frescoes, both here and at Anuradhapura. 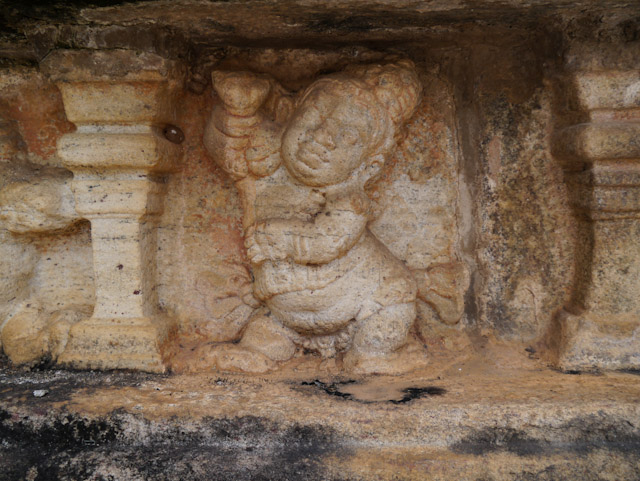 The Nissankalata Mandapa is unique in that the pillars that held up its roof were carved in the shape of a lotus flower stem, all the other pillars are straight.

I particularly admired the detail on the pillars – and I am talking the detail of the carvings – not the large breasts!

As I left the quadrangle and headed south towards the Royal Palace group I found this recently re-assembled building. There is no detail on it, but it looks like a giant jigsaw puzzle has been partially completed. It reminded me of a saying about the Baphoun temple in Angkor Thom in Cambodia, its 300,000 pieces make it ‘the world’s largest jigsaw puzzle’.

I arrived at the royal palace area just as five bus loads of Sri Lankans soldiers were, thankfully, about to leave.

There was not a whole lot to see here, I was kind of expecting more ! The palace was  not particularly photogenic. I loved the bathing pool and had just plopped myself down on the steps in the shade of one of the trees when the bus load arrived and I had to remove myself from blocking the steps. But I did find an ice cream seller by the pool so enjoyed a cold block under another tree while everyone scurried about, peace ruined ! 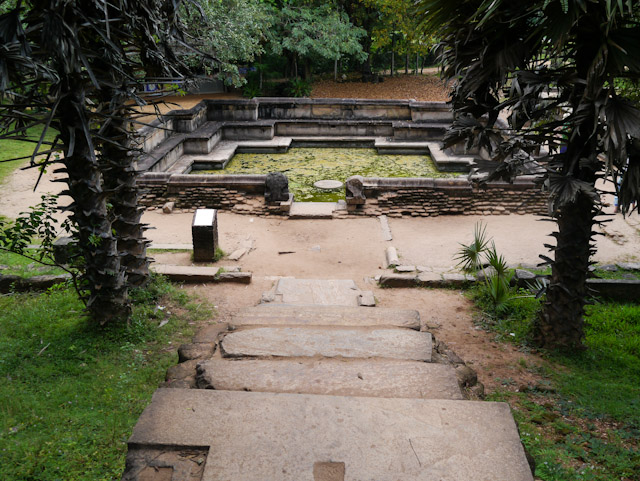 The council chambers was the last place I visited within the main part of the Polonnaruwa ruins. 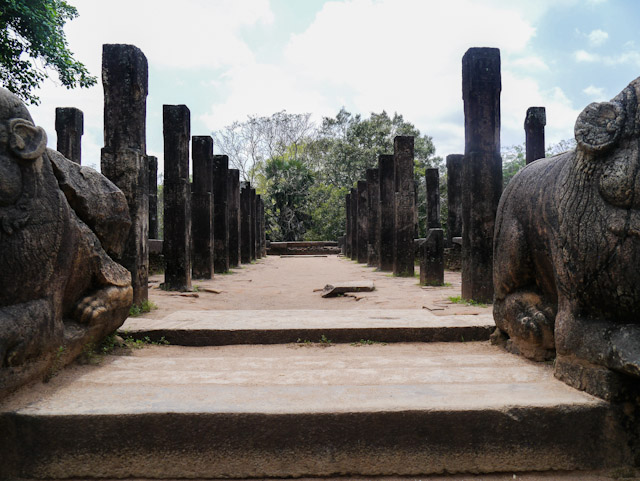 I then defied my prediction from yesterday and had enough left in the tank to ride back and visit the museum, it was quite enjoyable, though a tad humid inside. Though, maybe it was me creating the humidity, it was entirely possible, four hours under the sun with barely a sit down had left me a sweaty wreck, but I was not done ! I rode for 2.5km up the side of the tank (artificial lake) I walked along yesterday to the southern most ruins of Potgul Vihara, built in the twelfth century. The key feature here is a 4m high statue, though who it is exactly is not defined. One popular story was the statue was of King Parakramabahu eating a piece of papaya, though that is more of a thousand year old urban myth.

The ruins of Potgul Vihara itself were not particularly exciting but I did take some time to sit in the shade and enjoy some quite time before making the ride back to my guesthouse. 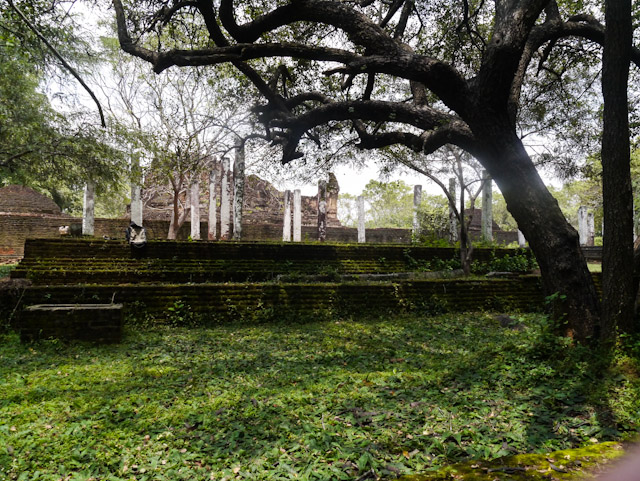 After a lie down and endless drinks of cold water I ventured back out again just after five to find the last remaining ruins left to be seen. I rode for about 3.5 kms on the highway, a challenge in itself, to the Vishnu Divale (No1), Though, disappointingly there was not a heck of a lot to see. A large rock, some steps and a monkey were the highlight!

Tonight’s dinner was as large and delicious as last nights, a slightly different range of vegetable curries and chicken rather than fish. The chili potato was especially lovely…

6 thoughts on “A day in the ancient city of Polonnaruwa”